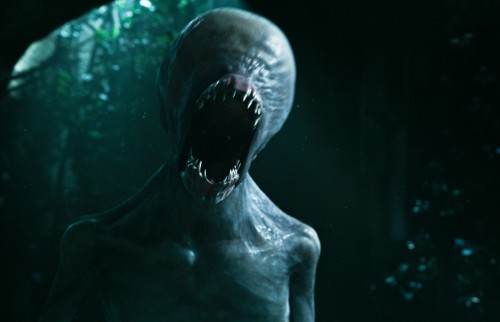 From the onset, it was known that the monsters in Alien: Covenant would be mostly digital effects. “We knew from the outset that we were going to do fully CG versions of all the creatures,” said visual effects supervisor Charles Henley, “but Ridley also wanted to have something there on set that he could frame on and direct, and that could interact with the actors. We started with the idea of reference puppets; later, this evolved into high-quality creature suits.” Scott said: “sometimes the physicality of an actor doing something odd that you haven’t thought of or you don’t want to do digitally, is useful; so whenever you can, always shoot the monster.”

Moving Picture Company was first hired to both explore creature designs, in collaboration with art director Ravi Bansal. The design process was later overtaken by Conor O’Sullivan of Creatures Inc. and Adam Johansen of Odd Studio. The two special effects companies joined efforts for the project, naming the monster shop ‘Odd Creatures’ for the occasion. The team included at least 50 artists, sculptors and designers. O’Sullivan related: “at first, I was told that everything was designed and there were going to be no men in suits. They said I was just going to do makeup effects, and asked if that was enough for me. In November [2015] I finally saw 100-odd designs for the creature going back 10 years, and Ridley still hadn’t committed. Then the producer rang me up and said, ‘do you guys want to be the creature designers?’ That’s when it all started kicking off. Then we got to January [2016] and Ridley wanted to put men in suits!” 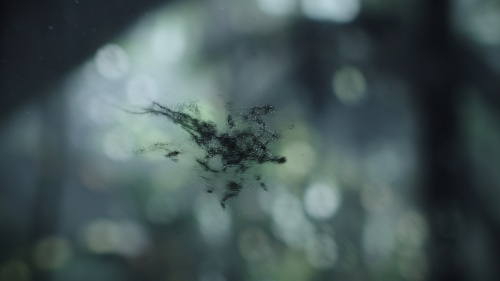 The film introduces the Neomorphs, spawns of the black fluid and genetic templates for David’s final creation — the Alien. Swarms of Neomorph spores are the first creatures witnessed in the film. They were developed and animated by Luma pictures using particle simulations based on the murmuration of starling flocks. Visual effects artist Omar Meradil established behavioural patterns of ‘leader’ spores and ‘follower’ spores, devising 3D volumes to contain clusters of them. Brendan Seals, part of the crew, said: “if a cluster was big enough, it would attract more spores. A small cluster would have less of a gravitational pull. We established boundaries and a language, but we didn’t want necessarily to make rigid rules. That’s the beautiful thing about nature — it’s never just one thing.”

Taking into a more creature-like shape, the swarms enter their hosts. Concept artist Nicolas Plerquin designed the shapes based on jellyfish, and dandelion seeds. The shapes provided moving geometry to guide spore formations. “You never quite see it clearly,” said Seals, “but Ridley was keen to convey that together the spores have this creature aesthetic. We were very much inspired by Giger — the tail subconsciously referenced the facehugger.” When the spores pierce the skin, the effects team altered their simulation properties to convert them into a fluid directly resembling the black fluid from Prometheus. The result of the infection becomes apparent in the medbay sequence, where an amniotic sac bursts from Ledward’s back — aptly named the ‘backburster’ sequence. From within the sac, a baby Neomorph emerges.

There were four stages seen in the film: newborn, toddler, adolescent, and adult. The ghastly design of the adult Neomorph was the base for the other stages, and actually harkens back to unused ideas for the previous film. Creature designer Carlos Huante was tasked with refining his own concept art devised for the Holloway Alien — the so-called ‘Beluga-head’ — in Jon Spaihts’ version of Prometheus. Although the character was excised from the final script of that film, the concept art would see new life during the pre-production of Covenant. During the new design process, the Neomorph always retained the goblin shark-inspired extendable jaw, and Huante experimented with the level of likeness of the designs to the shark itself — with some of them sporting a literal shark-head, and others taking a subtler approach. Eventually, the final design became aesthetically coherent with the earliest iterations. “The new Neomorph was developed from an idea Ridley had since the early days of Prometheus,” said Henley. “He had concept art when we had our first meeting — these ghostly white creatures with a protruding back of the head. It was humanoid and has this large head and a smooth face without eyes. It’s not particularly muscular, and has spikes on its back.”

The head of the Neomorph was particularly focused upon. “It’s like a smooth, ghostly face where there’s something masked out,” Henley said. “And then the jaw can burst out of that smooth face with very sharp teeth.” Johansen added: “the face was hard to resolve, especially the closed mouth which was to be very anus-like.”

The skin’s colour scheme was designed by Damian Martin. It had different areas of texture. “We gave the Neomorph areas of dry skin and more waxy skin, with a sweat element,” Henley related. MPC visual effects supervisor Ferran Domenech added: “the anatomy of the Neomorph’s mouth was designed to match a goblin shark with a hinging inner jaw full of teeth that could swing forward while staying connected to the face by flexible gums. The Neomorph had a softer outer skin than the Xeno, so he would have wrinkles and excess skin that would ride and slide over the muscles when crouching, but would smooth out and become tough when standing on it’s hind legs. The rig had dynamic skin built into the base setup that could be augmented by the tech animation department using cloth simulation when extra detail was required.” Johansen added: “[it was] clammy, sweaty; Ridley said there was a drug addict feel to the skin.” 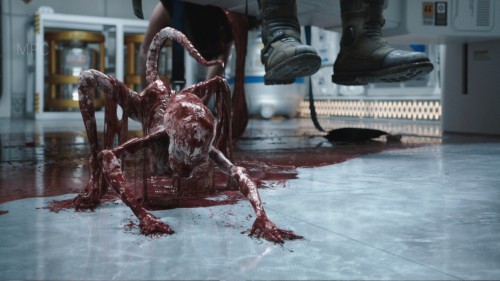 Designs of the Neomorph growth stages were obtained by reverse-engineering the adult creature. To portray said growth, digital artists employed specific rigs. “Because the Neomorph appears in the film from its birth to its adult form,” said Domenech, “we had to create different stages that would be able to blend shape into one another. For this, we created four different rigs, a baby Neomorph, a toddler, a teen and an adult. All capable of transforming into the next. The baby and toddler particularly had special controls to animate the length and shape of the joints so the transformation could be done in non-uniform way, with burst of growth with one limb expanding before the other.” 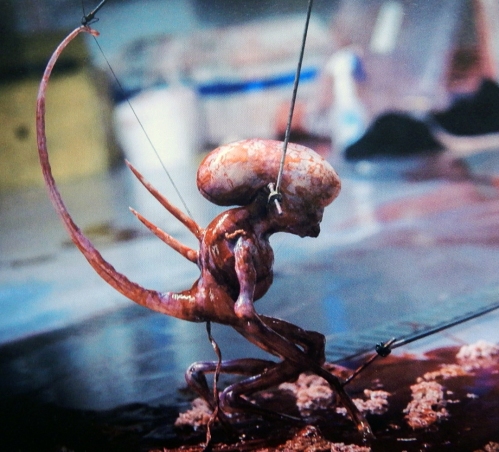 Odd Creatures devised a Ledward dummy rigged to burst open on cue, through which puppeteers could evert a baby Neomorph rod puppet, whose skin was cast in clear silicone. Despite its size, it included a complete retractable jaw mechanism. Johansen related: “it was a real bastard to puppeteer because it was covered in KY, blood and methocyl. I was taking directions from Ridley and just trying to hang onto the thing. it was almost impossible even to stand on set, it was so slippery.” Once filmed, the scene was digitally enhanced by MPC, with a digital double of the victim and the Neomorph. Cloth simulations were used to manipulate the amniotic sac model. Animators replaced the Neomorph puppet with a keyframe-animated CG version with translucent skin and bone and muscle layers, using blend shapes to portray its rapid growth. For all versions of the Neomorph, actor and contortionist Javier Botet performed reference motion studies.

A second Neomorph bursts from Hallett’s mouth in the ‘mouthburster’ sequence, one of the first effects sequences to be filmed. On location, a dummy of the actor was puppeteered from beneath by O’Sullivan, in collaboration with prosthetics supervisor Rob Trenton who maneuvered the baby Neomorph through the dummy’s mouth. The alien emerged wrapped in a slime-filled sac fabricated from hot-melt vinyl by Damian Martin. 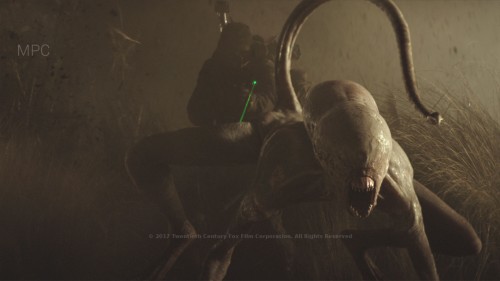 Both Neomorphs, now at the ‘adolescent’ stage (another reverse-engineered design), join efforts in an attack on the Covenant crew in the wheat field. Interaction with the actors was provided by an adult Neomorph suit, sculpted by Andy Hunt and Colin Shulver. It was worn by Goran D. Kleut.  “The suit guy was fantastic,” remarked Henley. “We got perfect lighting references, and all the actors were fully engaged with performing against a creature that actually looked pretty haunting on set.” The suit’s skin was moulded in foam latex and painted with rubber cement. Odd Creatures also built an intricately-detailed close-up Neomorph head endowed with a retractable jaw mechanism.

Once filmed, the suit and head was replaced by MPC’s digital Neomorphs, which applied some cosmetic modifications to the aesthetic of the character, including an overall smoothening of the skin. The Neomorph digital model was sculpted and devised by Federico Scarbini, Andrej Szasz and Damien Guimoneau. The animation of the Neomorphs was frantic and extremely rapid. “We spent a long time trying to find the performance that nailed it for Ridley,” said Henley. “We referenced monkeys and baboons and praying mantis and did performance capture to get a library of movements.” Domenech added: “the Neomorph was inspired by motion studies by actor and contortionist, Javier Botet, as well as animal references of bats and birds. The Neomorph had a nervous personality, always rhythmically breathing and barely containing it’s rage. Led by Animation Supervisors Philip Morris and Alexandre Ronco, the team did tests to develop the look and key poses. Running like a greyhound, slower cantering like a baboon, later creating character test keyframe animation clips of the Neo attacking, climbing, changing from run to walk. Through this exploratory animation process and review with the director, the character and motion language of the Neomorph took shape.” 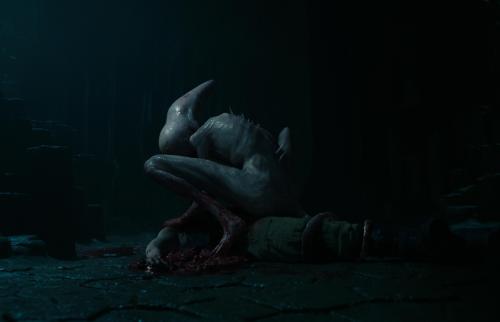 The adult Neomorph appears later in the film; its full form is revealed in the temple when it rises to a human-like posture and approaches David. “The adult Neomorph was designed to be very flexible and double jointed so it could get into extremely contorted poses,” Domenech said. “Ridley Scott was inspired by the work of Alessandro Bavari’s Metachaos film. He was invited to join the production where he created sketch poses for the Neo, very dramatic extreme profiles where the knees would raise higher than the head. This created a challenge where the hips and elbows would pinch and lose mass. To help with this, Asset Supervisor Dan Zelcs, introduced a set of very specific corrective blendshapes to help the problem areas.” 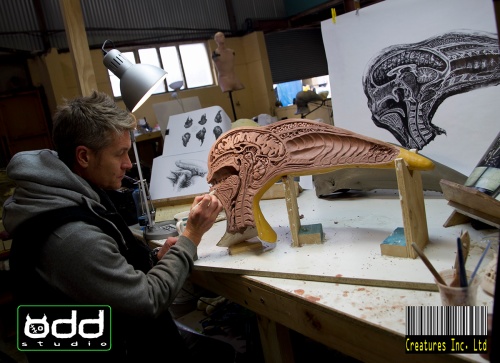 The Neomorph is killed by Oram, who is then led by David to the android’s experiment room, which Scott called “the Devil’s workshop”. For this scene, Odd Creatures built a large array of practical models portraying David’s progressive experimental stages leading to the Alien, including taxidermy models of Neomorphs and facehuggers, cross-sections of heads and eggs. Among those, certain models again took inspiration from Huante’s unused Prometheus concepts, including the ‘Babyhead’ design.

For more pictures of the Neomorph, visit the Monster Gallery.