“No one understands the lonely perfection of my dreams. I found perfection here. I’ve created it. A perfect organism.”

“They want Aliens, I’ll give them fucking Aliens,” said Ridley Scott of the eponymous creature’s return in Alien: Covenant. Previously, the director had said that “the beast is done. Cooked,” something that resulted in the complete excision of the Alien from the final script for Prometheus. However, the lack of actual Aliens in the prequel film backfired and became a widespread complaint among enthusiasts of the series; as such, Twentieth Century Fox pushed for the inclusion of the original creature in the sequel. “It went straight up there, and we discovered from it that [the fans] were really frustrated,” Scott said. “They wanted to see more of the original [Alien] and I thought he was definitely cooked, with an orange in his mouth. So I thought: ‘Wow, OK, I’m wrong.'”

In Alien: Covenant, the origins of the Alien are revealed as the result of David’s tinkering with the Engineers’ bioweapon, the black fluid. “We took it into a different direction,” Scott said in an interview. “The Engineers didn’t make him [the Alien], David made him; which I thought was far more interesting.” He also added: “he designed this motherfucker — rather than it came from the Engineers it came from him, but he needed to use their black deadly cleansing lotion.” Straying away from the original concept, the Alien thus became a reflection of its creator: a physical embodiment of David’s depraved, repressed sexuality — in both its life cycle and its appearance. The creature is the final result of the deranged android’s hybridisation experiments.

David lures Oram into an underground chamber with Alien eggs. The egg design reflected that of the previous Alien films, with cosmetic innovations such as vaginal openings in-between the petals. For the sequence, Odd Creatures devised several practical eggs, including two hero eggs with silicone surface and background eggs 3D-printed in fiberglass. Regarding the eggs, Johansen related: “a couple were cable controlled to open and one egg had a rig inside which spun a facehugger underneath a hot melt vinyl skin to show life. To me, it looks digitally untouched in the final film, it looked pretty cool on set when we had it running.” 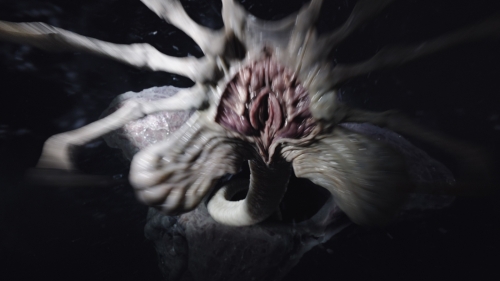 Upon David’s suggestion, Oram inspects one of the “perfectly safe” open eggs, only for a facehugger to erupt from the egg and tightly latch onto his face. The facehugger design was kept loyal to the established anatomy of this Alien stage, only with a generally more delicate, thinner silhouette. The facehugger was sculpted by Colin Shulver and Andy Hunt. Odd Creatures developed several facehugger puppets with translucent silicone skins. Each version was devised for a specific function. The first facehugger was rigged to burst forth from the egg. “It was literally like a cannon,” said Johansen. “We were just firing it at different speeds out of the egg. Ridley had a lot of fun on set with that.” A second facehugger puppet with spring-loaded fingers was able to latch onto an actor’s head; and the third was a radio-controlled facehugger able to scuttle across the floor. 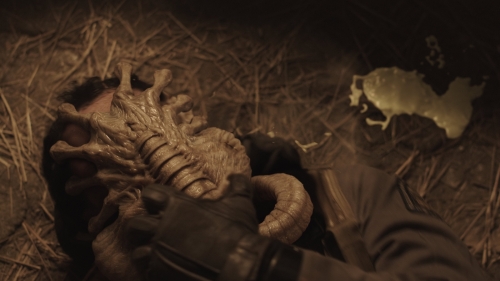 Plates were shot with and without the puppets, as they would only be needed as reference for the digital versions — brought to the screen by Framestore. The digital model was based on a reference maquette provided by Odd Creatures, and was endowed with skeleton, muscle, tendon and skin layers. “Once we had the maquette scanned, we sculpted extra detail into the surface with zBrush,” said visual effects supervisor Stuart Penn. “We built the ovipositor tube that gets rammed down people’s throats, because there wasn’t a puppet for that. We based that on reference from Aliens, which is the film you can see it in best. We had a lot of multi-layered subsurface scattering on the skin, and the egg sacs on the side pulsated in quite a gross way.”

For shots of the scuttling facehugger, Framestore animators experimented with spider-like walk cycles combined with serpentine thrusts of the tail. Penn recalled: “we showed them to Ridley, but it was quite clear that a walk cycle wasn’t going to do it. The creature moves in too much of a chaotic manner. It’s very much acting on instinct — and its instinct is to jump on somebody’s face! We made sure it moved really fast, and kept it feeling really dirty and scary.” The effect of the facehugger’s corrosive blood was a combination of practical acid splash elements and digital simulation of corrosion on Lope’s flesh with reference from Alien.

Shortly after Oram’s impregnation, a chestburster violently emerges from his chest. Like the Bambi-burster from Alien³, this chestburster has fully-developed upper and lower limbs. “It was based on a sketch by Ridley imself,” said Johansen, “and it’s quite different in its movement and look to the original Alien chestburster.” The creature, sculpted by Dominic Hailstone, was built as a rod puppet moulded from a sculpture by Dominic Hailstone, and endowed with an internal armature devised by Greg McKee. Translucent silicone was employed to give multilayered trasparency, with muscle, organ and bone layers.

It was only used to shoot reference footage; the puppet was replaced in post-production with a digital double — devised by Framestore — which featured layers for its skeletal structure (about 159 bones), muscles, circulatory system, organs and skin. It was composited in clean plates shot without the puppet.

The chestburster rapidly grows into the adult Alien, a design that took a long time to nail. Conor O’Sullivan said: “the classic Alien was pipes and tubes; this is more naturalistic. Everything Giger did was very elegant, and sometimes in the past the Alien has got lost in its horror story, trying to make a creature that is more and more horrifying. We’ve got back to this horrible elegance.”

In devising the new Alien, Scott and crew did reference the original creature suit, but decided to go for a more organic texture, which replaced Giger’s signature biomechanical aesthetic. In particular, the Museo della Specola in Florence, Italy provided key reference for the new design in the form of the wax ‘ècorché’ anatomical sculptures. “It was surprisingly difficult to extract that naturalistic quality out of the xenomorph,” noted O’Sullivan, “but that was a hurdle that we had to overcome, because that’s what Ridley wanted. The end result is more raw. It’s crazier, and a lot nastier.” The Alien’s skull was inspired by Necronom IV, with two large eye sockets in place of the painting’s bulbous black eyes.

The more organic quality was explained by the crew as part of a story point of this creation essentially being a prototype of the original Alien. Johansen said: “those biomechanical elements are sort of what makes it the xenomorph, but due to the storyline, this Alien predates that. Ours is almost like a flayed body — it has impossibly thin limbs, with the musculature and ribs on the outside. It was a daunting task, because it’s such a legacy to live up to. We are creature effects guys, and the xenomorph is the creature.” In the Monster Legacy interview, he also remarked: “the designs of the creatures were to be more animalistic, more raw or primal and far less refined than the biomechanical xenomorph we know from Alien.” 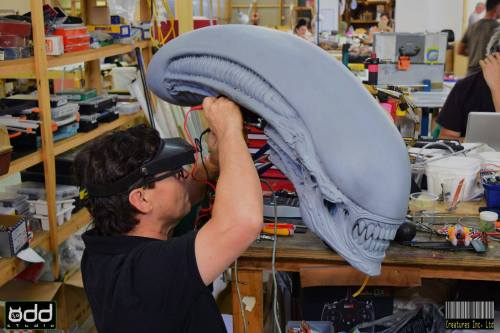 O’Sullivan and concept artist Colin Shulver refined Alien designs in Photoshop and zBrush. The head was sculpted by Bradley Simons whereas the body was sculpted by Johansen and Hailstone. Based on the sculpture, several different practical versions of the Alien were built. The creature crew, in order to maintain the selected design’s thin and gangly proportions, conceived a hybrid approach inspired by Japanese bunraku puppetry: a partial Alien costume that employed rods to manipulate the creature’s arms. Johansen explained: “Andrew’s head was in the ribcage. The xenomorph legs sat on the outside of his legs, and the xenomorph’s feet were down at the bottom of the stilts. I remember the first test — it didn’t look like a guy in a suit, because the proportions and the way it was moving were all wrong. It looked like nothing I’d ever seen before.”

However, the bunraku-style Alien suit could not be refined in time, and was thus discarded. “There were obvious restrictions on a suit that size,” Johansen told Monster Legacy, “in some of the sets — which is why we had the smaller version (foam latex suit) and an animatronic puppet from the waist up. On the 9ft suit, there was quite a bit of inertia from the head when he moved and the head at that scale (with some animatronic movements too) made it tricky at times for Andrew to balance on the carbon fibre blades. His arms puppeteered the alien’s arms too. Andrew did a wonderful job getting around in the suit, often walking over rugged terrain. A bit more rehearsal time for the full scale xenomorph team would’ve been good.”

A more conventional suit — worn by Adam Crawford and Goran Kleut — with adapted proportions, was used on set in combination with a mechanical puppet portraying the Alien from the waist up. They featured silicone lips, resin domes, and foam latex body skins. The creature team constructed the ribcage from 3D-printed bones and urethane casts, with flexible neoprene sections created by head fabricator Maria Fowler. “I really stated experimenting with 3D printing on this film,” said O’Sullivan. “We scanned Bradley’s sculpt, broke it down in zBrush nd produced object files for printing. We ended up molding the prints because of the weight issue, but we used whatever we could. The teeth were all 3D-printed, and then we had those chromed.” The domes were the most fragile portion. “We would get through one carapace every day or two,” O’Sullivan admitted. “We just accepted that they got busted and replaced them rather than trying to make an indestructible one.”

A digital version of the Alien was being devised at MPC in parallel with Odd Creatures’ progress. Asset supervisor Dan Zelcs oversaw the development process. Scans of the practical Aliens were integrated with ever-evolving zBrush models, a process that was closely overseen by CG supervisors Manuel Mantero and Julien Bolbach — who ensured that the rendered creatures stood up to detailed scrutiny. Ferran Domenech, part of the crew, related: “it was an artistic evolutionary process. It started with the model on set, and then we took it further. It took half the show before we had the asset.”

The digital Alien, sculpted by Damien Guimoneau, featured many cosmetic alterations to the established practical design. The mouth tendons are fewer in number, leaving the jaws more exposed; the ribcage is more pronounced; the shoulder guards are altered; and the anatomy is generally thinner, and includes digitigrade legs. 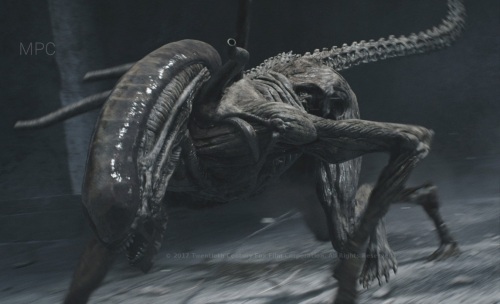 Animation of the Alien was based on reference footage of mammals and arthropods. Domenech remarked: “we did kind of a chimera of insect and mammal. We studied the praying mantis for agility and speed, tigers for weight and jumps, primates and greyhounds for locomotion.” 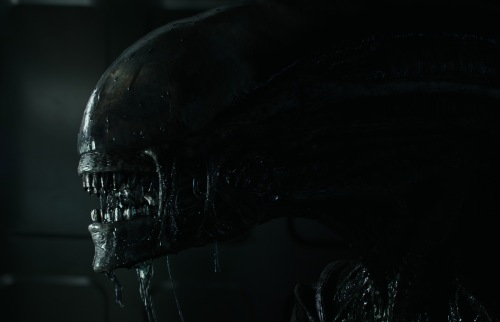 O’Sullivan concluded: “it’s like being at war doing these films. Ridley wants to see it physically in front of him, but he does like to mess things up. You’ve got everything planned, you’ve gone through the storyboards, but you actually need three or four versions of what you’re doing, because it will all change. It can be quite frustrating but when you look at the end results, you realize you’ve got nothing to worry about — because Ridley knows exactly what he’s doing.” 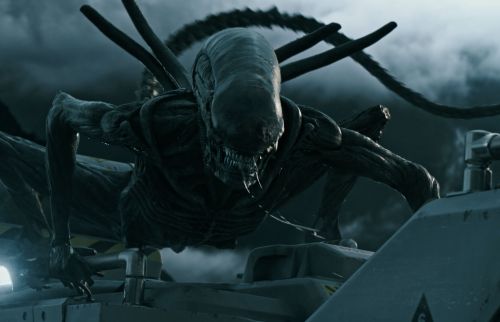 For more pictures of the Aliens, visit the Monster Gallery.

For an in-depth interview with Adam Johansen regarding the practical creatures built for the film, read the Monster Legacy interview.