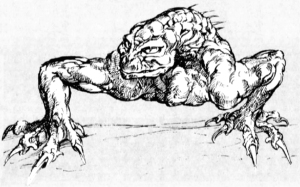 The Thing From Another World – Part 3 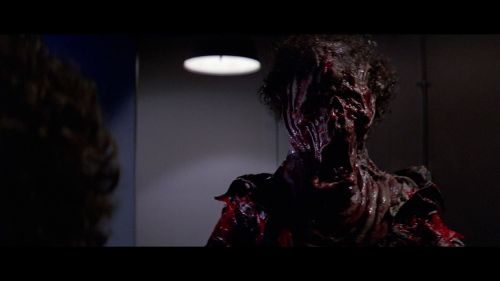 Watchin’ Norris in there gave me the idea that… maybe every part of him was a whole, every little piece was an individual animal with a built-in desire to protect its own life. Ya see, when a man bleeds, it’s just tissue; but blood from one of you Things won’t obey when it’s attacked. It’ll try and survive… crawl away from a hot needle, say.

Before Palmer’s gruesome transformation, Carpenter and Cundey discussed about giving the audience subtle hints on who might be the Thing during the centerpiece of the film — the blood test scene — and eventually settled upon a subtle eye gleam. “We were looking for some kind of a subtle way, to say which one of these [men] might be human,” Cundey revealed. “You’ll notice there’s always an eye light, we call it, a little gleam in the eye of the actor. It gives life.” Palmer is devoid of the ‘eye-gleam’ moments before the transformation. “There is no eye light [on Palmer’s eyes]. Let’s make it look subtle like he’s different and the audience won’t know until later. So he has dead eyes.”

END_OF_DOCUMENT_TOKEN_TO_BE_REPLACED

The Thing From Another World – Part 2 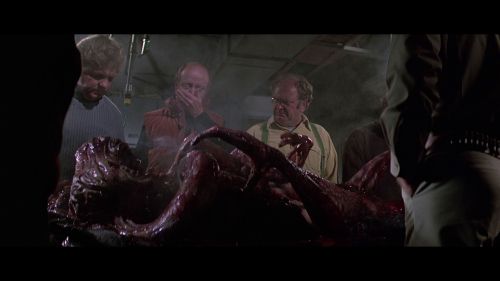 The Thing is first seen imitating a Swedish Norwegian dog. The part was played by a trained animal actor — a half wolf, half Alaskan malamute dog named Jed, trained by his owner Clint Rowe. He performed in most sequences with the exception of the beginning chase scene, where another dog, painted to be indistinguishable from Jed, was filmed.

END_OF_DOCUMENT_TOKEN_TO_BE_REPLACED

The Thing From Another World – Part 1 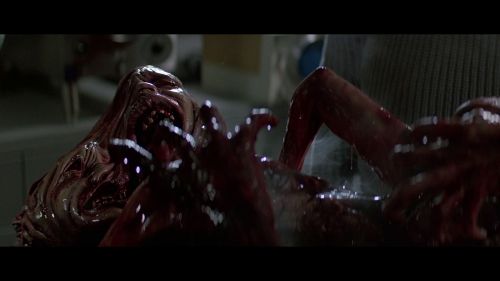 Is that a man in there or something?

“I first became aware of a movie called The Thing when I saw the original film,” said John Carpenter. “It was 1952 and I’d been about four or five years old. I think I saw it on a re-release. It was one of those films that, as you watch it, it was so frightening that my popcorn went flying out of my hands. When they’re up to the doorway and they had this Geiger counter — they open the door and he’s right there — I went nuts. Crazy. Then I read the short story in high school and I realized it was a lot different from the movie. What they’d done in the first film was make the James Arness monster more like a Frankenstein-type of creature. Yes, it was a kind of vegetable that could reproduce various lifeforms but he wasn’t the imitator; the creature that could imitate any lifeform from the original story. The John W. Campbell story Who Goes There? was basically Ten Little Indians with a creature in their midst; and it’s imitating either one or all of us; who’s human and who isn’t? That kind of idea fascinated me. We went in a sense back to that idea with the Bill Lancaster screenplay.”

END_OF_DOCUMENT_TOKEN_TO_BE_REPLACED 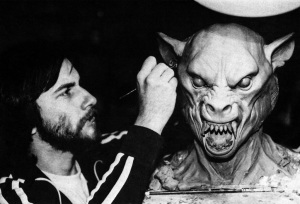 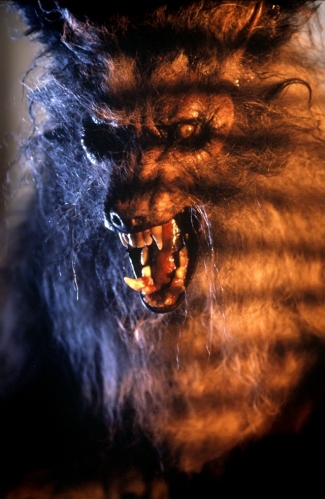 In adapting Gary Brandner’s 1977 seminal horror novel The Howling director Joe Dante hired John Sayles — a writer he had already collaborated with on Piranha — to completely rebuild the story, after the first drafts — written by Jack Conrad and Terence H. Winkless — proved unsatisfying. “One guy tried to adapt the book,” Dante told Combustible Celluloid, “and it really wasn’t working. That’s when I hired John Sayles. He wrote this picture after Piranha. He wrote Alligator and The Howling together at the same time in the same hotel room. You’d knock on the door, and he’d ask who it was, and you’d tell him either The Howling or Alligator and he’d slip the appropriate pages under the door.”

END_OF_DOCUMENT_TOKEN_TO_BE_REPLACED 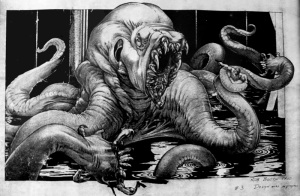 Beast of the Deep 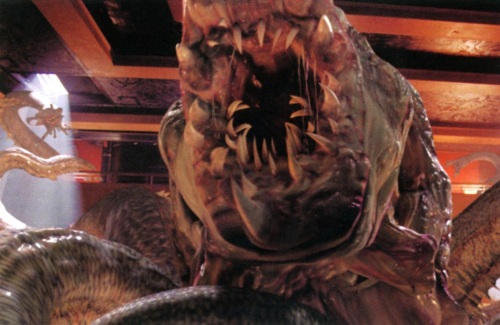 Finnegan turns as the DANCE FLOOR and the D.J. BOOTH EXPLODE as SOMETHING RISES UP from below them. His eyes widen. And there it is — The huge, horrible, mutated, mucus-covered, sucker-faced HEAD OF THE CREATURE.

A giant mutated protoplasm. Jutting up from a breach in the floor. The trunk of the Creature, the part where all the Tentacles come from is below the next deck. A slimy, translucent MEMBRANE slowly RISES, REVEALING what appears to be some sort of ORGANIC LIQUID EYE.

This is how the massive, unidentified deep sea Beast is finally revealed in Stephen Sommers’s and Robert Mark Kamen’s script for Deep Rising. In the climax of the film, it is revealed that the multiple worm-like entities infesting the Argonautica are actually the tentacles of a single, gargantuan Monster. Bringing the abomination to the screen was a task assigned to Dream Quest Images, the visual effects division of Walt Disney Company, and Industrial Light & Magic, for a limited number of shots. Dream Quest Shop supervisor Mike Shea had first to ‘cut down’ the original script, which conceived an unreachable — for the time — effects complexity. “When we first came on board in October 1995,” he told Cinefex, “there was a draft that called for some 500 effects shots. We were able to devise Steve in terms of what could and couldn’t be done, and assist with some of the early script rewrites.”

END_OF_DOCUMENT_TOKEN_TO_BE_REPLACED 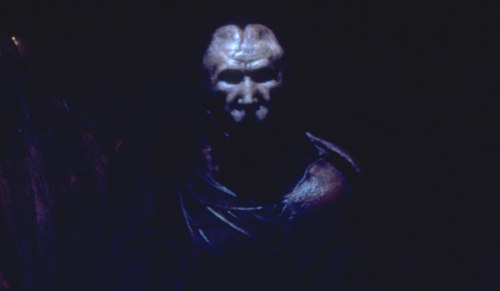 “Nature is a strange thing, I learned. You learn that very clearly when you work in a museum. You realize how nature uses the art of camouflage.”
-Donald A. Wollheim, Mimic

The original Mimic short story, written by Donald A. Wollheim and first published in 1942, was widely different in both plotline and tone to Guillermo Del Toro’s film adaptation. In it, the narrator recalls a grotesque and mysterious ‘man in a black coat’ in his neighbourhood. When this figure is found dead in its apartment, it is revealed to be a gigantic insect, evolved to camouflage itself among humans — mimicking their appearance.