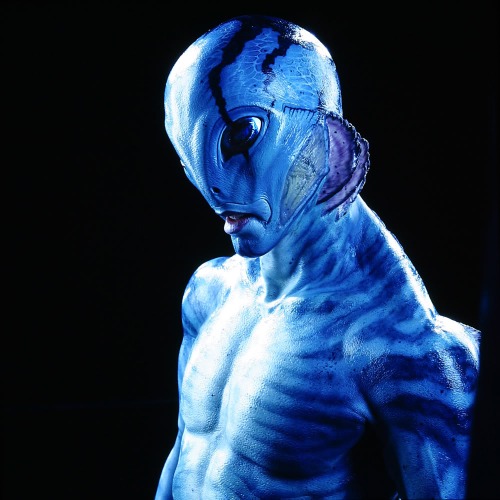 Abraham Sapien first appeared in the Seed of Destruction arc of Mike Mignola’s Hellboy comics — and was featured in Guillermo del Toro’s film adaptations. Abe was the director’s favourite character from the comic series, but despite that he wanted to take a different direction, character-wise: “[he was] completely different from the Abe Sapien in the comics, because I wanted this delicate, beautiful, very sensitive character to juxtapose with Hellboy.”

Mike Mignola’s original Abe design, as it appears in Seed of Destruction.

The film version of Abe was designed by Wayne Barlowe and Steve Wang (“you can’t say fish-man without saying Steve Wang,” Elizalde said). In designing Abe, del Toro wanted to infuse the design with an unearthly aesthetic. “I jumped right on him,” Barlowe said. “Guillermo’s initial idea was that he wanted Abe to be beautiful, not in a conventional human way, but more in a piscine manner. That’s almost mutually exclusive; fish are extremely elegant and can be beautiful up to a point, but much of it has to do with their markings. When you look at a fish’s face, I don’t know that beauty is involved in the way they look, but in this case, Guillermo wanted an unearthly beauty.” 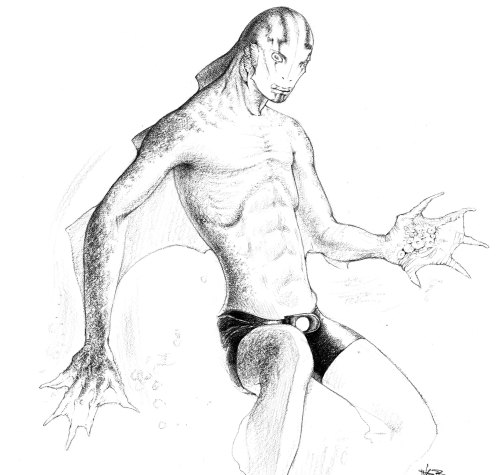 One of Barlowe’s concepts for Abe.

Barlowe himself wanted to stray from the original comic book iteration. Compared to Sammael, the design process for Abe was more linear and less elaborate — although with its own restrictions. “I had to divorce my thinking about what Abe was like as a character in the graphic novels because I felt I had to do a fresh and different take on him. With that said, the design curve on Abe was much shorter than it was on Sammael, because Abe wasn’t the revelatory character that Sammael was. He didn’t have a whole bunch of parts that opened up and things that modified themselves. Guillermo liked the idea of Abe’s markings playing a large role in the character, so I did a bunch of different patterns for Abe, and what they arrived at was pretty close to what I came up with. The contrast between [Abe and Sammael] is that Abe is very smooth, attenuated, graceful and unearthly, and Sammael is a lumbering Monster. So while it was a difficult curve for Sammael, Abe had his own restrictions. To do a character who is somewhat dolphin-like in the fact that he’s smooth and contoured rather than gnarled and wrinkled — that’s a slightly more difficult creature to make.” 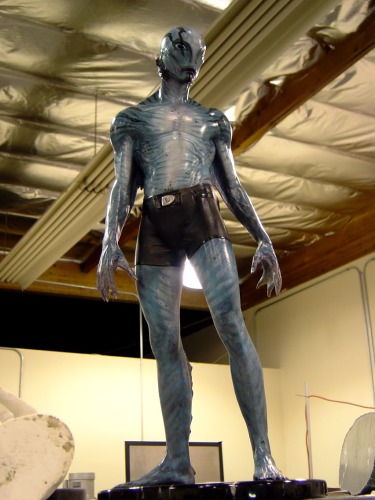 The 18″ Abe maquette, sculpted by José Fernandez and painted by Steve Wang. “José’s maquette was the first 3D version of Abe,” Mike Elizalde said. “And he really nailed it. It was a beautiful maquette; and when we presented it to Guillermo, he almost cried. He just marveled at it. That gave us a very good start with Abe.”

Mike Elizalde, head of Spectral Motion, commented on the design process: “in designing Abe, we didn’t want to stray too far from Mike Mignola’s original concept — although Guillermo had some very specific ideas about he wanted to see in the character. For example, he didn’t want Abe’s eyes to look like human eyes surrounded by makeup; he wanted something more interesting, a three-lidded nictitating eye. The character’s eyes were also bigger and spread farther than a human’s eyes would be.”
Interestingly, Abe’s mouth was at one point supposed to be an extensible set of jaws, based on certain species of fish, but the idea was discarded. 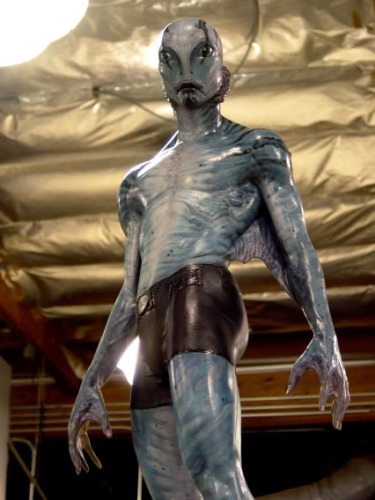 Abraham was played by Doug Jones, and voiced by David Hyde Pierce. Another performer (“a shorter Asian guy,” according to José Fernandez) was hired first, but Del Toro quickly decided against it. A body cast of the former served as the basis of the full-scale sculpture, sculpted by Steve Wang and Jeff Buccacio (for the body and fins) and Don Lanning (for the hands). A cowl piece for the head, a face mask, and body appliances (which included torso, arms and legs) were moulded in foam latex; Abe’s gills were moulded in urethane, whereas the webbing in various parts of his body was cast in thermagel. The creature was finally painted by Tim Gore and Steve Wang, who also designed how the make-up would be broken up in sections. 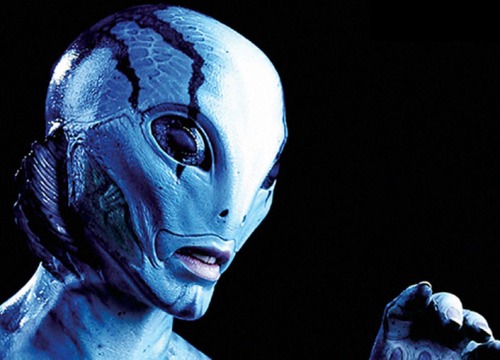 The make-up application on Jones would last four to six hours a day (depending on whether Abe’s torso would be exposed or not) with Thom Floutz, Nigel Booth and Simon Webber applying it. The actor would first have to wear an undersuit made of spandex and industrial latex; a form-fitting, vacuform face plate that compressed his nose and flattened his face was also applied; the cowl piece and face mask were then applied, with the left and right neck pieces following. 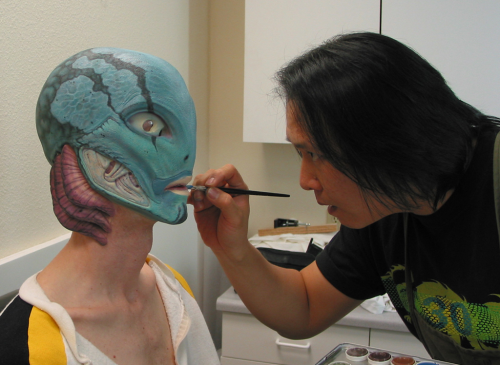 Growing from the sides of Abe’s head are the creature’s gills, animated sequentially with servomotors designed by Mark Setrakian (the same mechanism adopted for Sammael‘s tentacles). Elizalde explained to Cinefex: “the gills had a series of three servos, and each servo moved one gill flap. Mark Setrakian designed a little circuit board that allowed him to puppeteer the gill flaps via radio control in an undulating fashion, so they wouldn’t all move at once. That really gave the gills a nice, organic feel.”  Setrakian added in an interview with Make-Up Artist magazine: “each gill has its own servo, so they’re able to make a nice undulating, aquatic motion. The wire goes down to a receiver pack, and the servos are actually in the gills themselves, extremely small and compact.”

The effect of Abe’s eyes closing with multiple lids and a nictitating membrane was a digital addition to the make-up — in 170 shots of the film — by Eden FX. Elizalde explained: “because the makeup was very form-fitting to Doug’s face, we couldn’t fit mechanisms in there to make the eyelids blink. So it was decided early on that the eye blinks would be CG.” Ed Irastorza, digital effects technician, also added that “Eden was untried in film prior to Hellboy, but I thought their work was good, so I gave them the assignment of doing 40 to 50 shots of Abe, in addition to doing the CG eye blinks, they added minor facial expression to help bring him to life.” 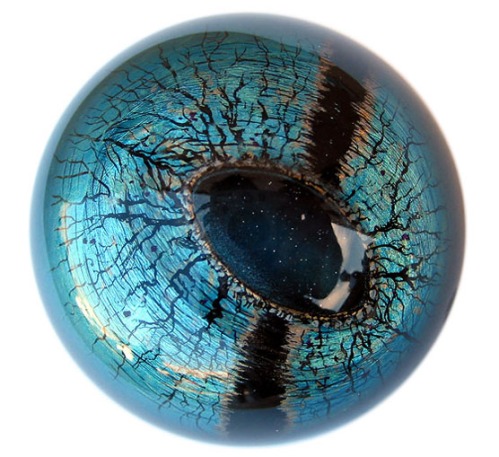 The rest of the make-up consisted in a torso-and-shoulders appliance — ending in the elbow joint — and hand and feet prosthetics. The hands featured finger extensions; for the scenes where Abe had to show the peculiar, sideways extensions of the hand, an animatronic insert hand was used in combination with the suit. Many sections of Jones’ body were actually left exposed and were airbrushed to blend in with the make-up appliances. 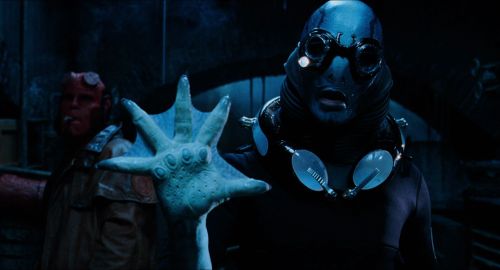 For shots like this, an insert animatronic hand was put in perspective with the fully-suited actor, creating a smooth illusion that it’s the actor’s own hand.

The suit itself was finished with teeth prosthetics, as well as thermagel webbing pieces. “Therma-gel is a great material,” said Elizalde, “because it has tremendous memory. You can stretch it ten times its normal size, and it will still return to its original shape, without much distortion. And it will do that time after time because it is very durable.” As a final touch, clear fins cast in urethane were attached to the shoulders, back, and calves. To save time, the head and body parts were designed as reusable pieces, whereas the neck and shoulders had to be replaced every day of Jones’ 30-day shooting schedule. 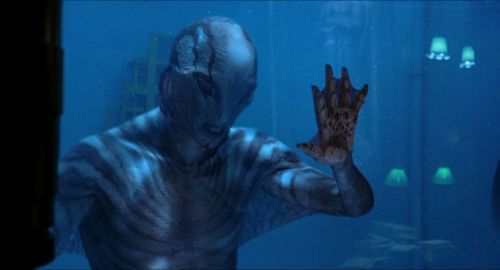 Most shots of Abe underwater were realized with digital effects provided by Tippett Studios. Caustic lighting effects were applied on the digital model (which was obtained by scanning the full-size sculpture) to make it appear it was effectively swimming in water. A new muscle rig and skin solver were written for the model by Paul Thuriot and Todd Stinson. Shop supervisor Blair Clark commented: “Abe is basically a naked man, with nothing that allowed us to cheat or hide anything. And he is raising his arms up and over his head to do these swimming strokes underwater. So, we needed something that would make the geometry behave like real musculature would.” The muscle rig was attached to the animation puppet and drove the rest of the layers.

Interestingly, reference for the animation was mainly provided by The Creature from the Black Lagoon and its sequels. Additional reference came from frogs and cetaceans, and Doug Jones’ own movement vocabulary. “It was a lot about bringing energy from the shoulders and from the arms,” said visual effects supervisor Todd Labonte, “so that he’d always have these graceful, circular motions.” Visual effects supervisor Blair Clark added: “he had a bit of quirkiness when he’s out of the water, so I was always trying to play it like he’s much more comfortable in his home environment, more graceful. He’s already graceful on land, but just more fluid in the water. To keep the same characteristics, we went back in and copied the gestures Doug had developed.” 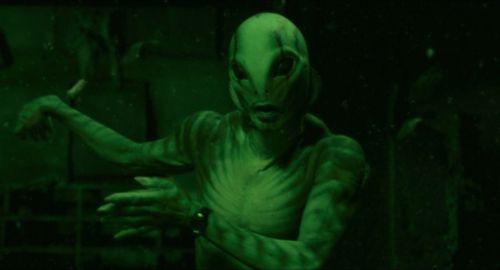 A number of underwater shots featured the practical Abe, specially treated to enhance the illusion of the ‘dry-for-wet’ shots. Elizalde said: “one of the things that makes something look like it’s underwater is that it has a perfectly matte, dull surface. Even a shiny object, like a coin, will appear matte underwater. When Abe was out of water, we gave him a slightly slimy appearance. But when we shot him in the dry-for-wet sequences, we didn’t do any of that reflective stuff — and that really sold it.” The actor was tethered to flying wires and shot in a smoky stage; the wires were erased in post-production, and Eden FX added practical water elements to the footage. 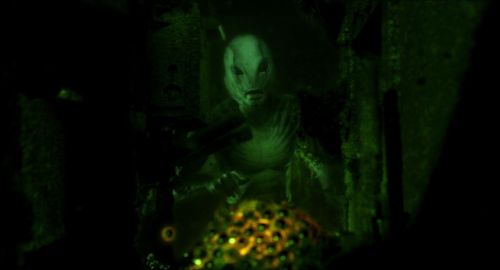 Del Toro was thoroughly satisfied with how the character was brought to life in the film, both with practical and digital means. He said of the creature that “Abe Sapien is perhaps the most beautiful creature ever committed to film.” 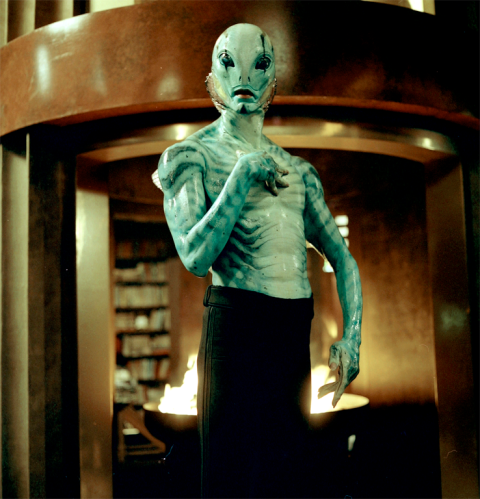 For more pictures of Abe Sapien, visit the Monster Gallery.

Next: The Desolate One