And there was the Horntail, at the other end of the enclosure, crouched low over her clutch of eggs, her wings half-furled, her evil, yellow eyes upon him, a monstrous, scaly, black lizard, thrashing her spiked tail, heaving yard-long gouge marks in the hard ground.

-J.K. Rowling, Harry Potter and the Goblet of Fire

Designing the Hungarian Horntail for the film adaptation of Goblet of Fire proved to be a challenge: given the long tradition of dragon depictions in both films and general media, the creature designers focused on what not to do in order to distinguish the Horntail (as well as the other First Task dragons) from previous dragon designs. The creature effects team set out to portray a spectacular and surprising creature.

“The biggest challenge is to make them not look like what anyone else has done,” said Nick Dudman. “So when you’re doing dragons, werewolves, anything that’s iconic you hit a problem because a lot of the good ideas have already been done, so you have to find a different angle.” Several concept artists — including Wayne Barlowe, Adam Brockbank, and Paul Catling — sketched most diverse iterations of the character. Early concepts included bird-like and shark-like variations.

Rowling’s description in the novel made mention of “clawed front legs,” a trait that was initially considered, but discarded; in order to maintain artistic integrity with the first film, the filmmakers eventually steered towards a four-limbed configuration of the anatomy, harkening back to Norbert. The key element of the creature — the ‘horntail’ — was initially envisioned as a scorpion’s stinger, or a tail tip with clusters or rows of spikes. In the end, a large spear-like tail tip covered in smaller spikes was chosen. As the design process continued, it was decided to make horns the key visual motif of the monster — endowing it with a crown of horns on its head, which continued, mane-like, down its neck, back and tail, ending in the spiked tip. Some of the horns on the creature’s head can also flare out and hinge back to highlight its emotional state. The final design — penned by Paul Catling — was also strongly influenced by birds of prey: a hawk-like beaked tip of the mouth and a proportionally large chest housing powerful flight muscles completed the imposing look of the Hungarian Horntail. 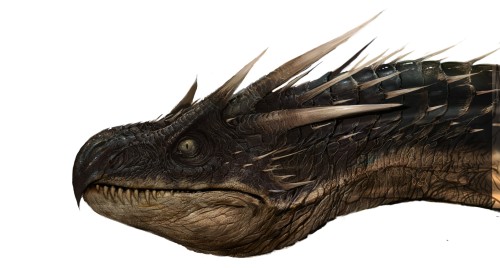 Based on the approved design, Kate Hill sculpted two quarter-scale Horntail maquettes, which were moulded in fiberglass and painted for reference. A larger scanning model was then devised and supplied to Industrial Light & Magic to create the digital model of the dragon.

The maquettes also served as reference for a full-scale Horntail animatronic, built by Nick Dudman’s special effects team. The puppet would be used in the early shots that revealed the creature in the distance. Dudman recalled: “the production wanted a lightweight life-size dragon head to run about on set with. Once we had that head and eight feet of the neck, we suggested that we could sculpt the rest very quickly, keeping it very basic. We used that for wide shots of the dragon in its cage.” Kate Hill led the creation of the full-size sculpture of the Horntail — aided by Waldo Mason, Andy Hunt and other sculptors. 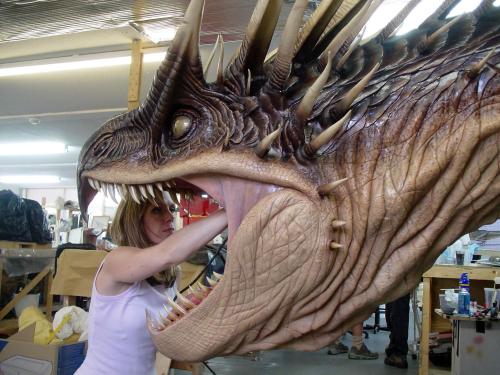 Animatronic systems supervisor Matt Denton mounted the creature’s head to a computer-controlled performance system that was devised cannibalizing parts of Aragog and the Basilisk built for the second film, in order to save both time and budget. The skull of the dragon was fabricated in fireproof fiberlass with a steel beak, epoxy teeth and silicone skin. For a dragon that could actually breathe fire, the mouth interior was lined with flame retardant Nomex. The entire head was coated inside and out with Flamebar, a flexible fire-resistant elastomeric silicone sealant. John Richardson and his mechanical effects team fitted the mouth with twin flame jets using a benturi system that blasted liquid propane over a pilot flame. The Horntail animatronic could shoot a 36-foot stream of dragonfire at the camera. 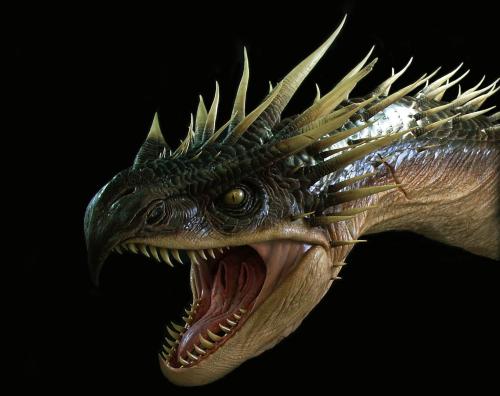 The skin of the creature was painted by Kate Hill and Waldo Mason. The thorns on the Dragon’s head, neck and back were moulded in coloured resin, and were of six different sizes; a total of 200-300 (including ‘backup’ thorns) were made. The larger spikes were reinforced with fiberglass matting. Each thorn was individually hand-finished, and painted once put in place on the Dragon.

The finished animatronic was mounted on a mobile, wheeled unit — which eased transport of the enormous prop. The head could perform a wide range of motion, including an articulated neck and mouth, and movable eyes, eyelids and nostrils. The wings could make limited movements and the body could move from side to side. The puppet was shot inside a hydraulically-operated breakaway cage. In addition, the full-size Horntail was also used at the film’s world premiere in London. 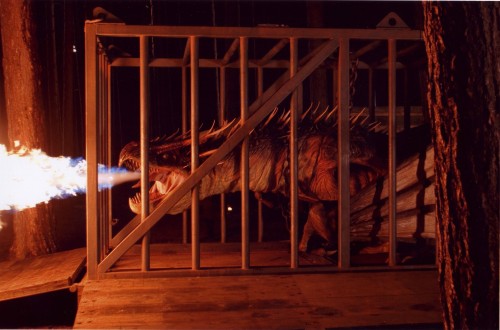 Oh, don’t worry about ’em, Harry, they’re seriously misunderstood creatures… although, I have to admit that Horntail is a right nasty piece of work.

Since the beginning, computer animation was going to be the main tool to bring the Horntail to life. The task was assigned to Industrial Light & Magic, whose digital effects artists fashioned a Horntail model starting from the maquette provided by Dudman’s team. The digital model was used for the remainder of the forest sequence, as well as the entire first task scene. A small-scale version of the Horntail also appears in the selection scene. 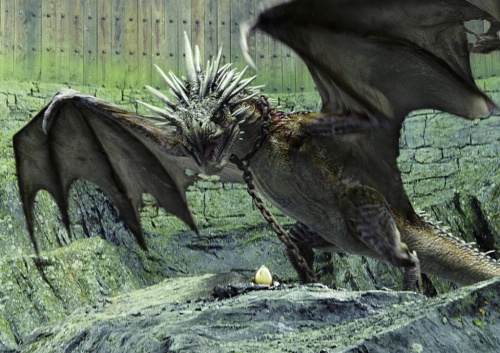 Texture artist lead Terry Molatore oversaw model painting and endowed the creature with a colour scheme that closely matched the maquette and the puppet — with specular sheen, translucency, and detail in the membranous wings. Character rigging supervisor Eric Wong devised an animation rig that allowed spreading and folding of the wings, with dynamic interactions for membrane billowing effects. Development of the final appearance of the dragon and the sequence’s array of visual effects was supervised by Robert Weaver.

Development of the Horntail’s body language was assigned to animation director Steve Rollins, who collaborated with visual effects supervisor Jim Mitchell. Much like the design itself, the animation mainly referenced birds of prey — such as eagles and owls. “When you see the movie, look for the head twitching, head cocked, and quick twitchy movements; these were all from the bird references,” said visual effects supervisor Tim Alexander. Reptiles and bats also provided useful insight for certain movements. Different iterations of the animation sequences were attempted before a final version was selected by the director. “Where the dragon crawls across the rocks, we’d do one version with it using its hind legs, another where it’s crouched down, using the batlike hands on its wings to crawl,” Alexander explained.

Crafting the dragonfire was another challenge. “Fire is a natural occurrence, everyone knows what it looks like. They know if it looks fake,” Alexander said. “We needed fire to be directable, and that took a long time.” Many of the dragonfire shots were a combination of the digital Horntail and practical fire elements provided by John Richardson’s team. A handheld flamethrower device blasted flames across rocks in the first task arena set. For the chase scene, the fire was conveyed with composited practical flame elements shot by physical effects supervisor Geoff Heron, as well as digital fire simulations created in ILM’s Zeno pipeline. Said system made use of Stanford University’s ‘PhysBAM’ physics simulations. “Stanford’s smoke simulations created roiling and spinning particles,” said Alexander. “It was similar to the live-action pyro elements, so we used that as the basis for our CG fire. Smoke tends to move slower than fire, so we did a lot of work with speed and scale — too fast, and it spurted everywhere; too slow, and it didn’t create the roiling effect. We then developed a shader look with very sharp detail broken up at the ridges.”

In the novel, the first task ends in the arena; in the film, however, the sequence was taken into a more action-oriented direction: the Horntail breaks from its restraints, chasing Harry outside the arena. Visual effects supervisor Jim Mitchell developed the idea. He related: “There never was any of the chase around Hogwarts castle, but one day when I was checking out the huge physical model of the castle for some establishing shots, I thought how cool would it be to see Harry and the dragon flying through its deep ravines, under bridges and past these giant, stoned structures. I imagined the dragon landing on one of the steep towers and roaring like King Kong on the Empire State Building. Mike Newell and the producers liked the idea and so the sequence grew to include the chase.  I think it opened the sequence up and made it more perilous and exciting than it originally was.” The chase scene offered the opportunity to further showcase Horntail animation — swooping like a hawk or crawling like a bat on the Hogwarts towers. 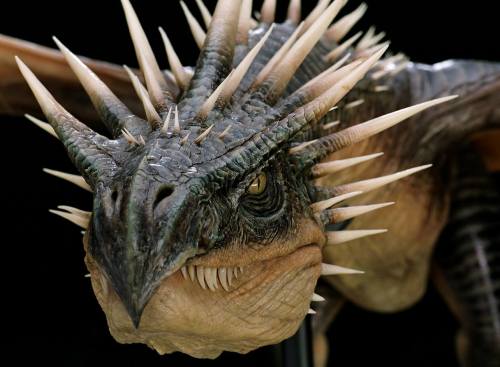 Colliding into a bridge, the Horntail falls into an uncertain fate, whereas its miniature counterpart makes a cameo in Harry Potter and the Half-Blood Prince — roasting chestnuts on a cart outside Weasley Wizard Wheezes. Jim Mitchell was satisfied with the final results of the Horntail animation and rendering for Goblet of Fire, saying that “ILM did a great job with the animation and look of the bat-like dragon making it as real as any dragon I’ve seen.”

For more pictures of the Hungarian Horntail, visit the Monster Gallery.