Exclusive: The Demons of ‘I, Frankenstein’!

Creating the demons for I, Frankenstein was a task assigned to the special effects artists of the Make-Up Effects Group. Monster Legacy had the chance — and the honour — to interview Nick Nicolaou, co-founder of the company, again — following our last exclusive — discussing the make-up effects of the film. Read on! 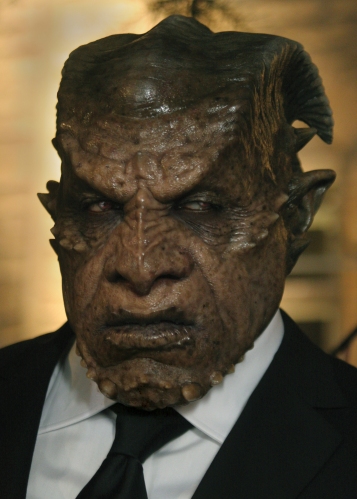 Dekar, played by Kevin Grevioux — the author of the original graphic novel.

Monster Legacy: Were you familiar with Grevioux’s graphic novel prior to your work on the film?

Nick Nicolaou: I was familiar with the graphic novel, but I was never able to get a copy to read. I knew of the premise and saw quite a bit of the artwork. When the production approached us, the first thing they pointed out was that the graphic novel was the inspiration, but it was just a stepping stone and the film was being developed in a slightly different direction.

Monster Legacy: What was the approach to the Frankenstein’s creature character in the film?

Nick Nicolaou: In previous incarnations of the Frankenstein creature, he is always the antagonist, a monster. In this film, the creature is the protagonist, the hero even, and we wanted a design for the creature that, while consistent with him being stitched together using various body parts from different corpses, while also maintaining Aaron Eckhart’s strong aesthetics, helps allow the audience to identify with him, and accept him as the hero.

There is also a progression with his make-up. In the opening of the film, he is heavily scarred and monstrous, but over the course of the next 220 years, his scarring slowly becomes less disfiguring. This is not about making the Frankenstein character look frightening and using his physical appearance to scare people and drive the story (as in other stories) – his physical disfigurement in this story is there to identify him as the Frankenstein character – it is his branding. But the purpose of the Frankenstein creature goes deeper than the “face value” of the character in this retelling, it is his “humanity” that is important and the center of the film’s journey. The film studio and production were very hands-on in this development and wanted to make sure the look fitted into the aesthetic of the story they wanted to tell.

It did take a few iterations to get the Adam/Frankenstein scarring aesthetically pleasing. We did it all sculpturally on a life-cast of Aaron Eckhart. Because it was such a fine line to work out the level of scarring, we all had to see it 3-dimensionally and do several camera make-up tests at varying degrees to make sure the director and studio were happy.

For the first stage scarring, which was more intense, there were 4 major silicone appliances on the face. For the latter stage of the scarring (220 years later), all the scars were individual transfers that we patterned over his face. There were around 9 on Aaron’s face. When we had to add scars to the body it went up to about 30 transfers.

Monster Legacy: What was the director’s general input for the Demon characters?

Nick Nicolaou: Visions of Hell – “Human souls now in Demon form”; our designs were trying to maintain a humanity behind all the Demons – they were not crazy, illogical creations totally removed from the Human form, but the Human form guiding how far we could take the Demon aesthetic. Director Stuart Beattie wanted that reality in the designs, he wanted to feel the soul of the human being come through in the performance. I agreed, it gives a character a stronger presence and allows the audience to relate to them.

Monster Legacy: Who designed the demons and gargoyles, and what were the designs inspired by?

Nick Nicolaou: I, Frankenstein was an amazing project to work on. We had a great opportunity to create a horde of prosthetic Demon characters, an opportunity that you do not often have in this CGI-heavy environment. The gargoyles were all CGI, and we had nothing to do with them; we designed and created all of the Demon characters. The focus was to try and evolve a large variety of memorable “Demon looks” but to also make sure they felt that they were all visually balanced in concept and design.

Only a few illustrations were supplied to us by the production, so we had to develop the looks using Zbrush concept drawings and 3 dimensional sculpture maquettes. We had to develop a solid design grounding relatively quickly, so director Stuart Beattie could give us his input on what he liked. We were sculpting madly to try and get as many ideas on the table as possible. There were over 30 different designs in the end.

The initial 3-dimensional sculpture roughs were a blessing and saved us a lot of time as the production build up was slow, and we did not have any actors to work with. Once we finally did get the actors, it was a matter of transferring the looks onto the new actor’s forms – the 3-dimensional sculpture roughs gave our team a solid direction to move from.

The prosthetics were fabricated with a combination of Foam Latex and Silicone appliances. When you start breaking down sculptures into various prosthetic pieces, your workload doubles: sculpture, mould-making and fabrication techniques become more intricate and costly – but you end up with some seamless make-up applications. Also, contact lenses and Demon teeth were designed, with some frightening looks being developed. 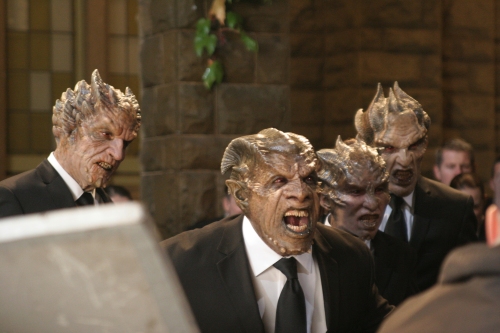 Monster Legacy: How did you differentiate and ‘customize’ the single designs in order to make them distinguishable?

Nick Nicolaou: The script was the first source of inspiration. The role of each of the key Demons was clearly laid out, so we really got a sense of who they were and this set our foundations. Once we established the look of these characters we tried to balance out all the other Demons with as many varied looks as possible – one of the main factors helping us to do this was the design of the horns.

Elaborate horn designs helped us create a sense of hierarchy within the Demon realm – with the larger horns given to Demons of more authority and rank.

Monster Legacy: Were there any particularly complex scenes to film?

Nick Nicolaou: I can’t recall anything being too difficult or over the top. From a production standpoint very early on our prosthetic team was split off into 2 filming units, so there were times where we were doing 12-15 prosthetic Demon make-ups at the same time. The make-ups were very intensive and it really stretched our crew and resources.

Monster Legacy: How much of your work did actually end up in the final cut of the film?

Nick Nicolaou: We are yet to see the film, but I’m sure the characters and make-ups we created will be highly featured. I know the trailers and aesthetic of the film looks heavily slanted in the CGI arena, but our Demons were key characters in the story and were integral to major scenes with the Frankenstein character. We created the Frankenstein look for the main character, an animatronic character for a key scene and dozens of make-ups effects for flashback sequences and the genesis of the Frankenstein monster, so we must get a serious look in on the final story. Again, the CGI world may overwhelm the balance of the film aesthetic but our characters should make their mark.

Monster Legacy: Do you feel the film did justice to your practical work?

Nick Nicolaou: Again, we are yet to see the film but I did see plenty of rushes and an early rough cut with some of our key Demon characters in major scenes – they looked great and played a strong role in the scene and telling of the story. The audience may be overwhelmed by the CGI component of the film, and may lose perspective on what we physically created, but that is true with most big-budget blockbusters these days. However, I feel our physical creations should still find their place in the story.

Monster Legacy: Have you seen the film — and if so, what is your opinion on the project, overall?

Nick Nicolaou: We have not seen the film yet. It does not open in Australia till late March. I know the critical reviews have not been too kind to the film, but I feel it’s going to be a fun popcorn film. This is a retelling of the Frankenstein story, a world apart from the Mary Shelley story – people need to let go of their pre-conceptions before they see the film.

The overall experience for Make-up Effects Group was a truly amazing one. We got to create some very cool make-ups and we worked with an amazing crew and wonderful production. Our company is really proud with what we created and I think we delivered some very cool and memorable characters and effects.

Monster Legacy: Do you have any future Monster films in MEG’s schedule?

Nick Nicolaou: We are still working on our own film projects that we have had under development for a few years. Great stories and heavily practical effects orientated projects with lots of monsters. Our film projects are still one of the main creative focuses of our company and we continue to drive the stories forward and inject a lot of time and effort to get them made.

For more images of the Demons, visit the Monster Gallery.

Enormous thanks to Nick Nicolaou and Paul Katte, founders of the Make-Up Effects Group of Australia. Be sure to visit their website to discover more of their special effects work!