Scum Of The Universe — Men In Black II, part 1

Rick Baker and Cinovation Studio returned to design and give life to the creatures for Men In Black II, accompanied on the visual effects front by Industrial Light & Magic. Like its predecessor, the film posed an ambitious challenge of bringing to the screen a vast array of practical and digital creatures; and yet, Sony Pictures demanded completion of the project in a fraction of the time the same teams had been given to produce the first film.

Work immediately began with several brainstorming sessions regarding alien designs for the film. Baker again referred to Carlos Huante and other artists, in close collaboration with Bo Welch to ensure that the designs fit the established aesthetic. Baker related: “I think we all found it easier to do this film, because we had a real trust for each other. Barry knew I had delivered what I said I would in the first picture, and I knew he’d do a great movie this time.”

One of the monsters witnessed early in the film is Jeffrey, a giant caterpillar-like alien worm. What is first seen is the flower-like appendage on Jeff’s head — a feature inspired by anglerfishes. “Jeff has a beautiful flower that grows out of its head like the anglerfish has this thing to trap the fish it feeds on,” Baker said, “so we made this flower based on that. It had this little working beak — we made a little puppet flower.” ILM effects producer Ned Gorman related: “the flower is typical of what we see in the world of the MIB. Nothing is what it appears.”

In fact, flower is just the topknot of “a 600-foot worm” with a tremendous appetite. Early Jeff designs were developed at Cinovation with illustrations and maquettes portraying a sea monster-like character; the design process was then taken over by ILM’s creature group, led by David Nakabayashi. Sequence supervisor Amelia Chenoweth produced a number of concepts, based on a vast array of species of worms and caterpillars. The latters — such as tomato worms — provided the most useful reference for their ‘stubby’ proportions and anatomy. Chenoweth said: “there was quite a bit of drawing and exploration done. One of the key things in the design was the powerful mouth on Jeff the worm. He had this incredible mouth with giant, rotating teeth that went back in concentric circles.”

An important trait for the design was bioluminescence, which provided Jeff with camouflage: charging rapidly, it would appear like a subway train to those not paying attention. Chenoweth related: “Barry had always wanted this thing to glow, because that glow works as a kind of camouflage for Jeff. There are shots in the movie where you see a subway car go by, with its windows illuminated; and then you see the worm go by — and the worm resembles the subway car somewhat because of these large spots of light on him, which look like windows.”

To achieve a sense of depth and mass in the character, modeler Ken Bryan devised three layers to the digital Jeff. He elaborated: “the exterior skin gave Jeff his silhouette, and told us what he looked like on the outside. A secondary interior skin mimicked the shape of the outside skin, and encased a digestive tract and some organs that you could see inside — otherwise, he’d just be an empty tube of a worm. We built these multiple layers of geometry that could be lit separately, to create the feeling that you are seeing deep down inside this jiggly, thick-bodied worm.” Using flesh simulations and shaders originally developed for Attack Of The Clones, creature developer Michelle Dean devised Jeff’s exterior appearance.

Bertino’s animation team took on the issues of how the creature ought to move and its locomotion style. Sonnenfeld was adamant towards not making Jeff move like an inchworm, with arcing segments of motion. Footage of a sea lion moving on land, with its mass moving and jiggling accordingly, became the main reference. Bertino explained: “Barry had said, ‘don’t make him look like a roll of Necco wafers’; so I came up with the solution of Jeff propelling himself forward with his shoulders, sort of like a sea lion.” For scenes of J riding on Jeff, Will Smith sat on a motion-controlled bluescreen gimbal platform built by physical effects supervisor Scott Fisher. In the final shots, it was replaced with the digital worm.

The multilayered nature of the Jeff model complicated the shots where the creature swallowed something whole, such as the subway cars or Serleena’s ship. To solve the issue, Bryan went through such sequences frame-by-frame, sculpting interior and exterior geometries of the model to ‘shrink-wrap’ Jeff around whatever it swallowed. The artist explained: “for example, I would have a model of Serleena’s ship that I could shove in there, and then I could see where the edges of the ship were poking out through the worm. I’d use that as a guide, to show me how to sculpt his interior gullet, his ntestines and his different layers of flesh. He had to look like he actually contained the objects he was swallowing.” For front shots of Jeff biting down on the subway car, physical interaction on set was provided by a physical effects rig crushing a real subway car creating the ‘biting down’ effect.

As with the first film — even more so — the MIB headquarters are filled with immigrant aliens, designed by Cinovation and ILM and portrayed by a variety of effects techniques ranging from make-ups to full creature suits to digital characters. As Men In Black II was tonally a more clear-cut comedy than the first film, the alien designs would often be devised to be humorous. Cinovation production supervisor Bill Sturgeon recalled: “we usually only had about ten minutes during Barry’s lunch to show him this stuff, so if if we showed him a drawing and he said, ‘I don’t hate that,’ we would take that as enough encouragement to make a maquette. Then the next time, we’d bring the maquette in, and I’d ask him ‘approved?’ — and if he didn’t say anything back, I would say, ‘okay, approved,’ and that was it.”

As with the Mikey suit in the first film, most of the background aliens were made as if the film revolved around them. Baker explained: “we made all of these guys as if they were the stars of the movie, even though a lot of them were only set dressing. I’ve learned that if we make them as set dressing — if we don’t finish off certain parts, or we don’t bother putting a mechanism in them — the director will always want them to do things they can’t do. The only answer is to make them so they can do pretty much everything — even though most of them will end up as nothing more than a blur going past camera. This time, I was pleased to see how much stuff wound up in the finished film.” 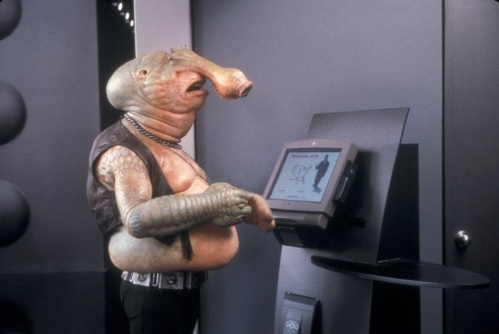 Time constraints were also a significant factor and led the team to create characters in the quickest manners. Baker related: “the whole movie was ‘beat the clock’, and the thing that always screws us up with make-up on actors is that they never cast the people enough ahead of time for us to do our work. So this time we suggested a lot of people we knew for the aliens — people who could deal with the makeup and had the appropriate physical attributes for the characters.”

Two prominent characters in the headquarters scenes are the ‘Bird alien’ couple — Bird Guy and Bird Lady, complete with beaks and bright plumage. This concept had been devised by Baker years earlier. He recalled: “when I did Grinch, I met Jeremy Howard and Mary Stein, two actors with extremely long necks. When I got involved in Men In Black II, I was trying to come up with something that we hadn’t seen a million times before, and I thought of a Bird People concept I’d originally come up with about 30 years ago. So I did new designs on photos of Jeremy and Mary, presented them to Barry, and Barry said, ‘okay.'”

Baker’s concepts were translated into make-ups by Kazuhiro Tsuji. Bird Guy was sculpted by Tsuji himself whereas Bird Lady was sculpted by Mitch DeVane. Tsuji recalled: “the most difficult part of putting this kind of animal design on a human face is that the proportions are so different. It was very hard to fit everything into the planes of the actor’s face. You can go too far to try and match it, and then it becomes too thick. If it doesn’t move, the actors can’t act in it — it just becomes a mask.” 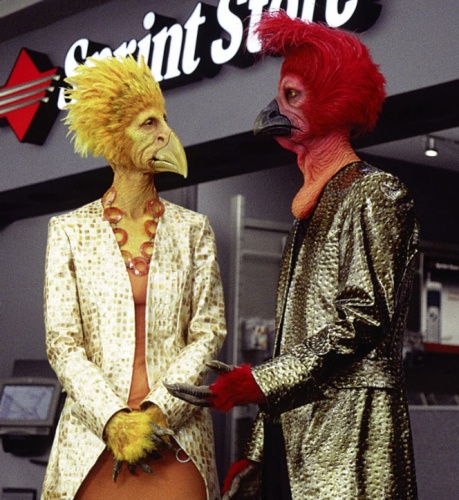 A plumage wig was also created. Known bird puppet-maker Jeff Cruts was hired to devise a working configuration, which ultimately employed feathers glued onto a standard wig foundation. Feathers were also applied to latex gloves that covered the actors’ arms and shoulders. The beaks were endowed with internal magnets that allowed them to be detached at will — without damaging other parts of the make-ups — for the performers’ comfort. 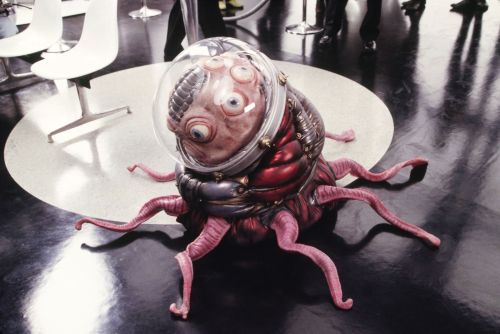 One entirely mechanical character, dubbed the ‘Robot Squid’, was designed by Carlos Huante and among the first creatures to be completed for shooting. Sturgeon explained: “Matt Rose was in charge of the Robot Squid. He and Chad Waters sculpted most of it, and Jeanne Vosloo did the fabric middle part, which housed mechanisms built by Kyle Martin and Mark Setrakian. It was, basically, a really expensive radio-control car. The individual tentacles had wires in them, and there were motors attached so that as the Robot Squid moved it looked like the tentacles were moving.” The puppet was fitted with two moving wheels an a parallelogram mechanism that allowed up-and-down and sideways movement. Each eye could move independently. 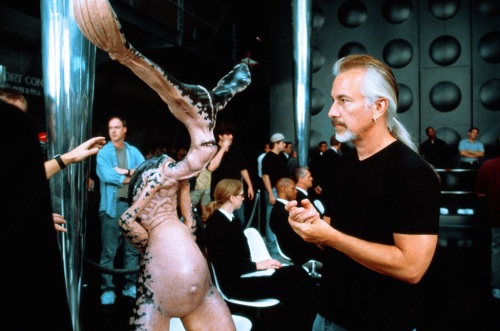 Other creature puppets included the vaguely humanoid ‘Flap Jack’, with a hammerhead-like physionomy, and ‘Spider Bunny’,  a large mass on gangly legs. Both were created as full-sized radio-controlled animatronics. 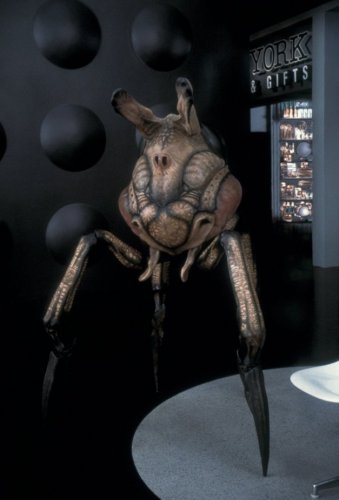 One of the first headquarters aliens to be approved and built was the ‘big dead alien’ — a large dead mass of tentacles that is seen being dragged across the floor. It had been originally designed for a scene cut from the final film where Agent L (Linda Fiorentino) was going to be seen performing an autopsy on it; due to its size, work on it started immediately. “Originally,” Sturgeon said, “it was supposed to be flopped out to take up the entire ground space of the set — 50 feet, if you spread the tentacles all the way out. It was so big it couldn’t fit in our shop. So we rented another shop down the street that had been the Planet of the Apes costume department, and that became the big alien shop.”

About twenty sculptors worked on the full-size sculpture of the creature for about three months. As the alien was being completed, word came down from production to stop working on it; as Linda Fiorentino could not reprise her role, the autopsy scene was cut. Since the creature had already been built and paid for, it was recycled for the headquarters scenes.

Alien make-ups continued to be produced ‘on the fly’ even during the dwo days of shooting the headquarters sequences. Sturgeon related: “there were lesser make-ups that we threw together at the last minute. Barry wanted a few more, and we didn’t have enough time or money to do appliances, so we would just throw something together. For example, Barry liked this contortionist that we had on set, but no one had figured out a way to put him in the scene. So they finally made this aquarium thing that he could contort into. We took a mask from the last Men In Black — one we hadn’t used — and pulled that alien together very quickly.” 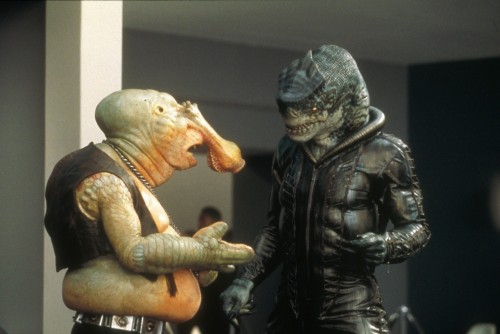 Previous: Men in Black, the Bug
Next: Part 2