Scum Of The Universe — Men In Black II, Serleena

Responsible for the design of Serleena’s various forms throughout Men In Black II were Rick Baker himself and ILM art director David Nakabayashi. “The trick,” recalled Nakabayashi, “was to give Serleena creature continuity, even though it would be seen in many different forms. There had to be visual cues telling the audience that Serleena was one creature.”

At Sonnenfeld’s request, ILM started with the basic concept that Serleena would be a plant-like organism. The character first appears in the film as a basal creature — labeled by the filmmakers as the ‘neural root’ — a worm-like being with a bulbous head based on an artichoke. John Berton related: “we envisioned it as something that might grow in the way a thicket grows. Some of the ideas we tossed around as inspirations were the ways in which the dragon in Sleeping Beauty ensnares Prince Charming — not literally, but as an idea of how a dangerous creature would ensnare the agents of the MIB, using a terrible, growing thing. We did a lot of work along those lines.”

For this purpose, ILM artist developed a new software called ‘I Growth’ that simulated tree and root growth, based on reference footage of timelapses of plants and fungi. The ‘thicket’ idea continued to be developed until Sonnenfeld decided to shift Serleena from a plant-based organism to a more eel-like or worm-like creature. Berton related: “the bramble didn’t seem to have enough intent. We didn’t want it to seem as if the monster was just growing like a plant, but rather as something that had purpose. So, at that point, the creature turned into something that was more like snakes.”

David Nakabayashi said: “I think the change was a very good one; going from plants to something that was more like an animal was much more scary. It created an ‘eew, I don’t want to touch that, and I don’t want that thing touching me’ kind of response from audiences; and even though the change came very late in the game, our software guys were able to make it work.” The new eel-like appearance of the character implied a reconfiguration of model geometry, textures, and animation. Serleena first appears as the neural root, an ILM design and digital character. As reference for the digital model, ILM modeler Sunny Wei observed artichokes, pine cones, seed pods from magnolia blossoms — and other things with overlapping petals that could flare out. The neural root flares out and hisses in defense when the dog barks at it.

Digital model supervisor Ken Bryan recalled: “once we had some artwork that sent us in the right direction, Sunny built the model flattened out, then wrapped it around a rig that allowed us to control it, open it up and let the animators animate it. It was a complicated model with mant parts that had to overlap each other, and he didn’t want them to penetrate whenever it did open. It was much easier for him to control things in a flat plane — though it was still stacked up three-dimensionally — than to have to figure it out while it was in its final form.”

To endow the creature with a more disgusting quality, Sonnenfeld wanted the neural root to look as slimy and wet as possible — an effect ultimately achieved with shaders. Erik Mattson explained: “we ended up doing what we called our ‘gel pass’, which was a separate slime layer that sat on top of the actual model. For reference, we grabbed an artichoke head from the supermarket and dumped various semi-thick liqids on it: shampoo, mineral oil. That was our best guide as to how the thing should look.”

As its tendrils multiply, the neural root transforms into Lara Flynn Boyle in black lace lingerie — an effect originally conceived by Rick Baker, who drew several iterations showing the roots of the alien growing and wrapping around themselves, taking the shape of a woman. Baker recalled: “it looked as though there was a clear shell of a woman, and this root was growing inside that shell. Eventually, the roots got so tight it started looking like skin.” This concept evolved into the quicker transformation seen in the film.

The final transformation is completed in two shots; the first is an entirely digital image of the neural root as it everts innumerable tentacles; and the second shot, a pan up Boyle’s body, showing the last moments of transformation in her head as the tentacles shape into her face and hair. Tom Bertino explained: “as we travel up her body, we catch up to the worms as they are finishing their job, weaving into her final shape. At the beginning, when the worms first start coming out, they are various thicknesses; but by the time we get up to her face, they have become so small, so thin and so uniform they’re like a pot of angel-hair pasta. All of these worms — which exist in 3D space — have some portion of her facial colouring or texture on them. There would be a little bit of her lipstick here, a little of the mole on her cheek over here, a little rouge over here. Some of this texture and colour was taken from the actual photograph; some of it was touched up by hand. We had to break up all of that photographic texture so that when the eels came together, there was the feeling that if those pieces really came together, it would form her face.” The effect was completed with a smooth transition from the worms to a digital Boyle face to the actual actress on the original plate. For most of the film, ever-multiplying tentacles emerge from Serleena’s fingers, an effect dubbed by Sonnenfeld as ‘finger cheese’ — achieved by compositing digital tentacles onto Boyle’s fingers.

In the film’s finale, a giant Serleena worm bursts out of Jeffrey. The worm was the approved idea of a long list of proposed iterations of a ‘final’ Serleena creature, all conceived by Baker and Huante. Most of them were deemed too complex to digitally create and animate, so the creative team decided to settle on a scaled-up version of Serleena’s primitive form. Designwise, in fact, the massive Serleena worm harkens back to the neural root at the beginning of the film — at a much larger size. Scale, in fact, was the main challenge the crew faced in bringing this last creation to the screen. ILM computer graphics supervisor Michael Bauer related: “we wondered how we could make the same creature play at two completely different scales. Just blowing up the little neural root would not have looked right. We had to figue out what makes something look big. It turned out to be a matter of both texture and movement. Wetness also played a big part in making a creature of this size.” 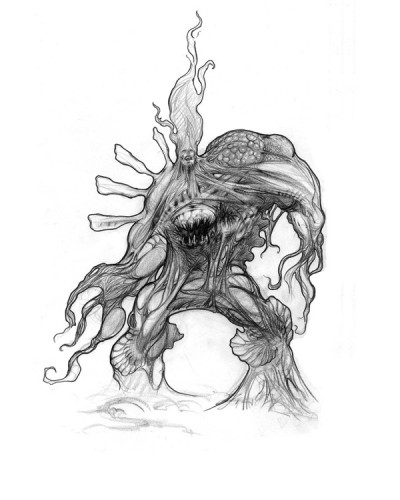 The Serleena worm was animated with procedural and hand-animation — a process overseen by animation lead Jennifer Emberly. Development of the creature’s textures was instead headed by sequence supervisor Kevin Reuter, who oversaw creation and application of varying levels of detail — from small to large scales. The sequence proved to be particularly comple, with at least thirty animators employed for it and twice the technical directors; one of the most challenging aspects was creating a convincing interaction between Jay and the digital tentacles, which sometimes employed a digital double of Will Smith. In a last attempt at getting the Light of Zartha, the defeated Serleena worm vomits a swarm of tentacles — another digital creation — which is blown to smithereens just in time by the MIB agents. 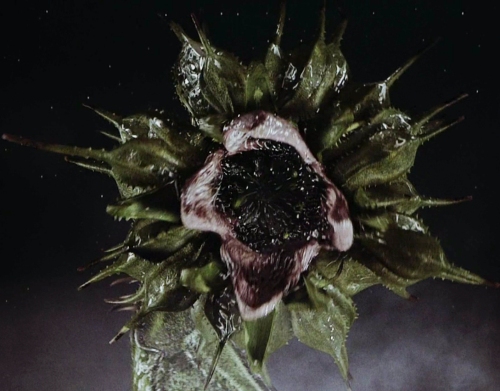