There was a terrible snarling noise. Lupin’s head was lengthening. So was his body. His shoulders were hunching. Hair was sprouting visibly on his face and hands, which were curling into clawed paws.

-J.K. Rowling, Harry Potter and the Prisoner of Azkaban

J.K. Rowling implemented lycanthropy in her Harry Potter novels as a metaphor for real world illnesses that are feared and cause those who carry them to be stigmatized. “Lupin’s condition of lycanthropy (being a werewolf) was a metaphor for those illnesses that carry a stigma,” the author said, “like HIV and AIDS. All kinds of superstitions seem to surround blood-borne conditions, probably due to taboos surro unding blood itself. The wizarding community is as prone to hysteria and prejudice as the Muggle one, and the character of Lupin gave me a chance to examine those attitudes.”

For the film adaptation of Prisoner of Azkaban, director Alfonso Cuarón made this concept the key to the visual portrayal of Lupin and his Werewolf form; at the same time, he deliberately intended to stray from Rowling’s relatively simplistic depiction of a Werewolf as a large wolf with subtle human traits, instead aiming for a hybrid of man and wolf — an idea that would allow more freedom in visual design. 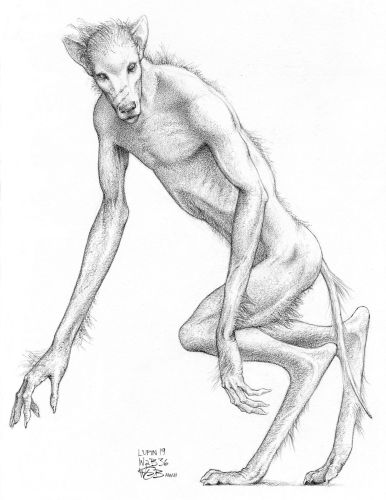 The concept of lycanthropy as a sickness was central to the conception of the Werewolf; Cuarón intended the endow the creature with emotional gravitas and sadness. To that end, creature designer Wayne Barlowe conceived the Monster as a gangly, emaciated creature with distorted proportions — giving it a hunched back, long and thin limbs, and a sickly, almost skeletal head. The Werewolf is also mostly hairless — enhancing the thinness of its form — with sparse coverings of light hair on its body. Barlowe’s renderings were channeled by Rob Bliss and Adam Brockbank, who took over the design and finalized it — making it less hairy and giving it a more skeletal appearance.

Early ideas for the transformation included more gruesome details that were ultimately discarded, such as cheeks ripping apart. This was also conveyed in the make-up David Thewlis wore on set, but was later replaced with a digital transition head. The in-film transformation begins with a two-stage make-up and then progresses through animatronics and CGI. Contact lenses, teeth and facial prosthetics at the corners of Thewlis’s mouth to suggest Lupin’s mouth splitting back to his skull. A cable-controlled back harness deformed Lupin’s spine as his jacket split apart, unvealing the hunched back and shoulder blades. Make-up bladders applied on the neck were inflated in a subtle manner. Close-up shots of Lupin’s claws bursting through fingertips and his legs elongating into a wolf-like configuration were photographed afterwards as insert shots.

The final stage of Lupin’s transformation, with his head finally changing into the Werewolf’s, was achieved with digital effects handled by MPC. This key shot began with a cyberscan of the actor, tracked to a CG body and then selectively deformed. CG supervisor Simon Clutterbuck remarked: “Alfonso was keen to have a second of David Thewlis before he changed. We slowed the shot to half speed, tracked in our CG puppet and match-animated it to David Thewlis in the shot.” The hair was digitally replaced with a Delilah simulation, animating the hair to spread and hrow as the head changed, and also animated shadrs to change the skin to darker shades. 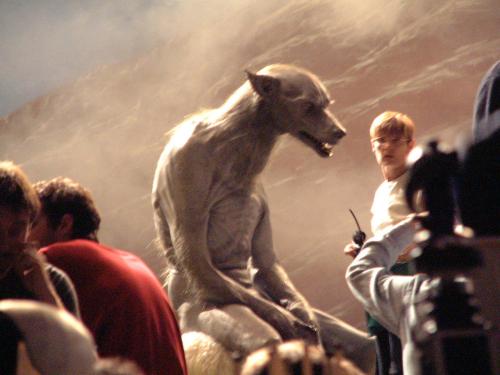 Despite the Werewolf’s clearly inhuman proportions, Cuarón intended to bring the Werewolf to life through a combination of a performer in a creature suit and a CGI version of the character, with the majority of the shots achieved with the former and wide ambulatory shots performed with the latter. Dudman recalled: “we maquetted the Werewolf in its ideal form, then decided how we might cmpromise to accommodate a performer in a suit — but we didn’t compromise enough. By fighting to keep the design as near to the concept as possible, we created a suit that looked great but was a nightmare to perform in.”

Werewolf suits were constructed to fit two performers — Marnix Van Der Broek (a Belgian ballet dancer) and Spencer Wilding (English kickboxer) — both cast for their tall, muscular and slender bodies. The foam latex suits were skin-tight and featured a neck extension (with eyeholes) ending in a fully animatronic radio-controlled head, as well as arm and leg extensions. When the performer threw his weight forward, he rose up on the stilts, transferring the weight to his shins. The head of the Werewolf was attached to a weight-supporting spine that distributed the weight around the hips and shoulders.

Werewolf tests and rehearsals were initially successful, but those results could not be replicated on the hilltop set where the climactic scene had to be shot. “We were fine until we got to the set,” Dudman related. “With the combination of claustrophobia and the position they were held in, the performers could do what they were asked to do, but not with grace. In retrospect, we pushed it further than we should have. It taught me that there is no good in saying, ‘stick to the original concept.’ What I should have said at the beginning was, ‘either this is purely CG, or we make compromises.'”

The only practical Werewolf shot surviving in the final cut of the film is a quick over-the-shoulder shot — a decision not finalized until post-production, because back-up clean plates without the Werewolf suits were also shot. This allowed MPC to insert the revised effects strategy — an entirely digital creature — without excessive rotoscoping difficulties. The digital Werewolf required muscle system research and development. Clutterbuck explained: “we implemented a paper on ‘multi-weight enveloping’ written by ILM. It put the Werewolf through an exercise routine, moving him through 1200 unique poses. The system learned the positions and we could tweak them if we weren’t happy with deformations. This built up a big library of poses. Animators could move the model around, and the system would fill the gaps, interpolating poses.” The Werewolf was animated with muscle animation, fur dynamics and digital spit.