Chimera of the Night

Though mentioned often in the script, the creatures in PITCH BLACK are seldom seen at length; rather, they are glimpsed, they are heard, they are felt. They are, really, the embodiment of your nocturnal fears: a howling coyote that jars you awake; the painting on the wall that comes to life when stared at too long… the sway of your bed just before the earthquake hits. Chimera of the night.
-David Twohy, Pitch Black script, 1998

Initially titled Nightfall, Pitch Black was originally scripted by Jim and Ken Wheat, before being extensively rewritten by David Twohy — brought into the project by Producer Tom Engelman for his previous film work (Terminal Velocity and The Arrival). Design of the film’s creatures — only labeled in production as ‘Predators’ — was assigned to Patrick Tatopoulos. The digital creatures — used most extensively in the film — were brought to the screen by Double Negative, supported by practical creations built by John Cox’s Creature Workshop. 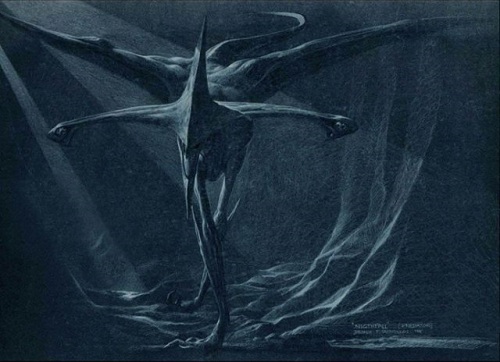 Design of the Predator by Patrick Tatopoulos. This concept established most of the final design, with the exception of the split end of the tail — a late addition to the appearance of the creatures.

The creatures went through several different iterations, and were the fruit of extensive brainstorming sessions between Tatopoulos and Twohy. “My first attempt at the Predator was very different from the final design,” Tatopoulos recalled in an interview for Cinefex. “It looked a bit like a pterodactyl. We developed it from there in about two months’ time. We had the luxury of time; and by the time David had to go to Australia [for location shooting], we had nailed something that everybody seemed to be pleased with.” The final result was a sinuous beast with shark-like skin, long arms, and legs that acted as wings. From their wrists, the creatures could eject blade-like tentacles. The cruciform head featured a crescent-shaped skull — which could be used as a lethal cutting weapon — as well as twin projections on the sides, housing sensory organs, and retractable teeth. 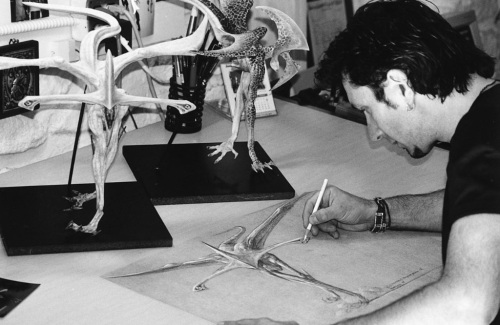 Once the design was finalized, a 12-inch maquette was sculpted by David Grasso, moulded by Russel Seifert and Robert Freitas, and painted by Chris Robin and Eric Harris. Said maquette was used as a base for the construction of the full-size practical creatures, and was scanned for the preliminary computer animation tests. Differences between the hatchling — seen early in the film as a swarm — and adult stages of the creatures were minimal and did not justify the expense of a separate hatchling maquette. Tatopoulos explained: “the budget was very, very tight, and that really limited us. So, we made do with this one maquette, without doing a different one for the hatchling, or even one with an armature to study the creature’s motion.” 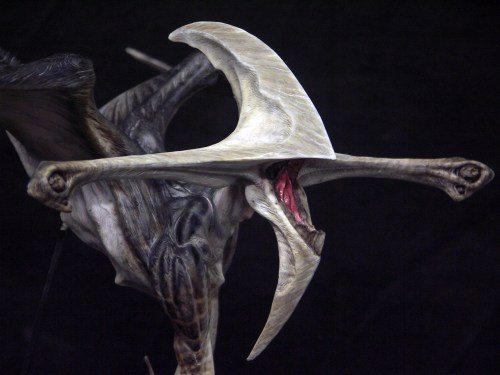 Tatopoulos initially bid for the construction of full-size practical creatures, but the task was ultimately assigned to John Cox’s Creature Workshop. Cox remained in contact with Tatopoulos throughout the entire process. “All we had to work with initially were some sketches of the creature,” Cox told Cinefex. “We were sculpting blind, essentially, for the first week; and we made up an armature and blocked out the whole thing — about 75% complete to a rough stage. Then, when the maquette arrived and we measured it, we realized there had been some changes made in the proportions. So, we stripped our sculpt back and started again.” Following a shop visit by Twohy and Engelman, the size of the creatures was requested to be increased by 10%. The sculpture thus had to be restarted from the beginning. “In all, I think we sculpted it three and a half times in three weeks,” Cox said. “From there, we spent another two and a half to three weeks finessing the sculpt, then moulding it.” A final change was then requested — a split end of the tail — in order to further distinguish the Monsters from the Aliens in the eponymous film series and the Jurassic Park Velociraptors. 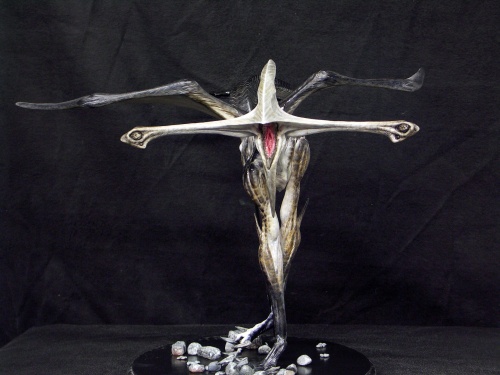 Four initial colour concepts were produced by Tatopoulos, including black and albino configurations. The final colour scheme included elements from both — combining a pale colour scheme with black highlights on the wings and tail. The pale areas were designed to reflect light in order to highlight their form in the darkly-lit scenes of the film. The final colour scheme was applied on a copy of the original maquette, which was sent to Cox’s team as reference for the puppets. At this point in production, the specific dynamics of creature animation still had to be determined. 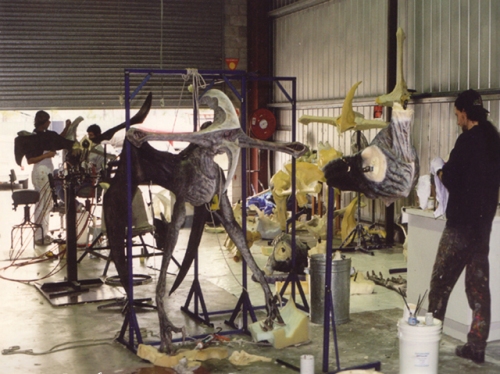 A total of eleven practical creatures was built: dead hatchlings; insert arms and talons of the creatures, as well as other body parts; a fossilized skull; a silicone lighting dummy used as reference to properly light the digital creatures; a stunt puppet, with shotgun blast damage and foam latex guts; and two hero animatronic Predators.

Animatronic portions of the creatures were built to portray the damaging effect light has on their skin. Cox explained: “we also made pieces of Predator that could blister when light was shined across them. We’d watch for the light to show up on the creature’s body, then hit a button that caused the blisters to rise in a prearranged sequence. We could speed it up or slow it down, depending on what was required.” 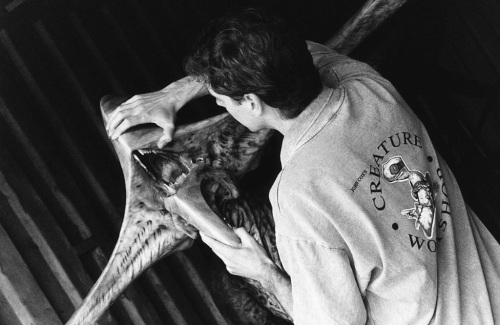 John Cox works on one of the Predator animatronics.

The two animatronic versions of the creatures stood six feet tall, with an eight-foot wingspan. One of them lacked the tail, in order to allow close-up over-the-shoulder sequences. Cox remarked: “those pieces had full head, neck and mouth movement, and each was connected to a pole arm that was on a seesaw arrangement so that we could raise and lower him. We could also swing him around a bit, and make the body swivel or tilt.” Since the more dynamic actions had to be performed by the digital versions of the creatures, the puppets were structurally simple. Cox continues: “everything was cable-controlled, and we ganged up the controls so that it was quite straightforward to operate with only four people. A stop-motion style armature enabled us to pose the wings in a fully-extended, half-extended or totally folded position. The tail was also articulated — through performers dressed in black, standing on either side of it — but not mechanized, since any complicated tail movement was to be done with CG. Our mechanical lead, Stuart Davies, did a great job with the mechanical components, making everything very simple and robust. It was all designed so that pieces could be taken out and clipped in quickly. We had only one cable go ‘ping’ on us throughout the entire shoot; and we were only down for a couple of minutes.”

The creature puppets were shot in quick cuts. “We just shot quick grabs with our pieces,” Cox explained. “There wasn’t that much you could do with them anyway, facially at least. They did not have eyes, a nose, or lips. They just opened their mouths very wide to expose a very big set of nasty teeth.” Extensive footage was filmed, but ultimately most of it was only used as reference material for the digital effects — with only a small number of practical shots remaining in the final cut of the film. In some instances, shots of the animatronics deemed satisfying by themselves were later cut due to the considerable difference in the movements when compared to the digital versions. 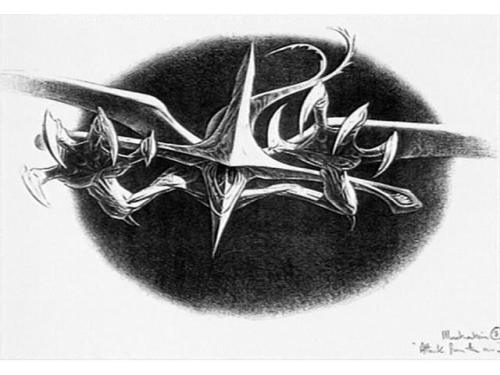 Nevertheless, the creature puppets also served the purpose of being the base for the digital models. Initial digital scans — principally based on the silicone lighting dummy — were used to construct the models, which were then refined to obtain their final configuration. The Hatchlings were just scaled-down, less detailed versions of the adults. Although test animations were initially assigned to both Photon Stockman and Weta Digital, Double Negative was ultimately selected for the task. Pitch Black was the company’s first major motion picture project.

Animation tests were reviewed by both Twohy and Tatopoulos. Peter Chiang, Visual Effects Supervisor, explained to Cinefex: “we wanted Patrick’s ideas, since he was the one who designed the creature. We really wanted to bring his initial vision to life in the animation.” Tatopoulos’s design presented several complications for the animators due to its sinuous, otherwordly anatomy. Chiang elaborated: “rather than design a creature that would be easy to animate, Patrick had created one without any of those restrictions. In the end, we had to come up with a fusion of Patrick’s vision, John Cox’s puppet and our own imagination. We played on the horror element, making it sinister and scary, yet dynamic and powerful. We also kept the creature largely hidden to enhance the emotional content and leave a lot to the audience’s imagination. We wanted to give the audience just enough information to stimulate an impression of the creature — at least most of the way through the movie. Then, by the end, they would have seen enough to piece together a pretty accurate picture.” 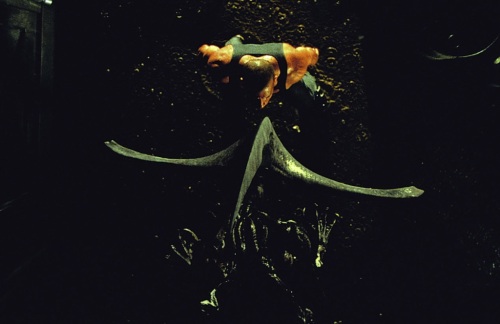 Animation of the Predators was based on real animal footage. Chiang recalled: “we analyzed a lot of existing animal behaviour, and decided that these creatures would be very economical in their movement, principally because of their conservation of energy and their feeding habits. There is almost a playfulness about them when they first break out after a long hibernation; but then the destructiveness and killing instinct set in as they begin looking for food. We were going for the beauty aspect, but at the same time we had to convey the volume of these creatures.” For that reason, the creatures were shown as gliding rather than flapping consistently. The peculiar movement of the split tail was also based on rattlesnakes.

The Hatchlings were animated differently, and their swarm behaviour was based on bats. Chiang continues: “because they’re small, they’re frenetic and fast fliers — almost bat-like. We used the Maya particle system and proprietary code written by Stewart Sargaison to realize the flocking and flight patterns of the hatchlings.”

The Predators use the sensory organs housed in the side projections of their head to sense the surrounding environment. Their ‘vision’ was obtained with computer animation — through a combination of Flame sparks, Chalice and Cineon effects generated by Richard Bain. Chiang explained: “we developed the idea of a layer of noise sent out from the creature and hitting a three-dimensional object. The shape of the object extrudes out of the layer as it disappears, and you get a quick blast back as the animal receives the information. That is constantly updated so that you get a regeneration, resolving the image as it sends out waves of organic noise. The three-dimensional object that’s extruded takes on the texture of the noise, and depending on the sort of resolution the animal gets by increasing the frequency of the clicks, its characteristics are revealed. Since it’s just sound, it’s shown as a very monochromatic image.”

In the finale of the film, to avenge Fry’s death, Riddick kills a swarm of the Predators with the engine thrusters of the salvaged spaceship. “Custom shaders were written by Julian Mann and Manuel Kramer to get the desired carbon disintegration and engine flame effects,” Chiang said. “Creature animation was accomplished by Fredrik Sundqvist, and Paul Riddle composited all the elements in Cineon.”

The Visual Effects Supervisor commented on the experience: “we placed very strong emphasis on the creature design and making sure that we didn’t skimp on the CG. Choosing the right tools for the money we had enabled us to cut corners in certain areas — and still deliver the narrative punch.”

For more images of the Night Predators, visit the Monster Gallery.