← Tribute to Carlo Rambaldi at the 2017 Romics
Thestrals →

A cluster of crude stone dwellings stained with algae loomed suddenly out of the gloom on all sides. Here and there at the dark windows, Harry saw faces… faces that bore no resemblance at all to the painting of the mermaid in the prefects’ bathroom…

The merpeople had grayish skin and long, wild, dark green hair. Their eyes were yellow, as were their broken teeth, and they wore thick ropes of pebbles around their necks. They leered at Harry as he swam past; one or two of them emerged from their caves to watch him better, their powerful, silver fish tails beating the water, spears clutched in their hands.
-J.K. Rowling, Harry Potter and the Goblet of Fire

In the Harry Potter novels, the Merpeople and the Grindylows are not the only denizens of the Hogwarts lake — a giant squid also resides there, but remained excised from all films. The creature was briefly considered for a cameo in Prisoner of Azkaban (during the Buckbeak flight sequence), being portrayed in early storyboards for the sequence — but was cut from the final version of the film for reasons of time and budget.

Compared to the Goblet of Fire novel, the second task scene in the film adaptation excises some details that showcased the culture of the Merpeople — such as large sculptures — and dialogue sequences, instead opting for a quicker-paced scene. Designwise, the Merpeople were assigned to Adam Brockbank: they went through several different iterations — some remaining close to the novel description and others leaning more towards animal-like anatomy. The latter direction was maintained as the design process progressed: the filmmakers opted for creatures that would organically meld fish and human qualities, instead of a human torso with a fish tail. Sturgeons served as key reference for the designs — for textures, scales, and proportions. Various options were considered for the Merpeople’s hair — including octopus-like tentacles. The final design featured sea anemone-like hair and humanoid anatomy with fish-like facial connotations, as well as a scythe-like fish tail based on tunas. 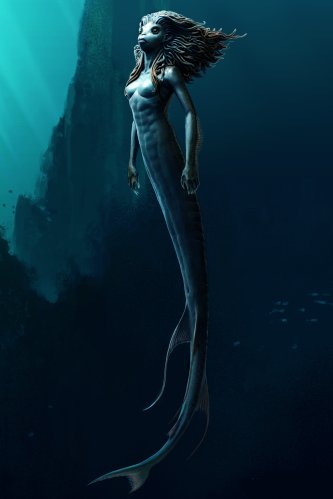 With the final design approved, it was sculpted into a series of reference maquettes that served as the base for the creation of the digital model that Framestore CFC used to bring the creatures to life. Creation of the Merpeople and Grindylows was supervised by David Lomax. The translucent, slimy appearance of their skin was resolved with the development of specific shaders that endowed them with subsurface scattering. “This aspect of the creatures was tricky to pull off as something slimy no longer looks slimy underwater,” said Tim Webber, Framestore FX supervisor. 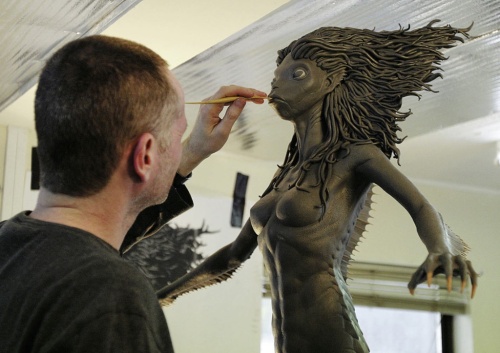 The Merpeople were animated in what was one of the first examples of a wholly computer-generated underwater environment. The creatures’ bodies were animated manually, whereas the hair and the fins were animated procedurally. “We added a lot of control tools to make sure the hair didn’t flatten whenever a mermaid was swimming fast,” Webber said. “It included generating extra turbulence to keep it looking snake-like and sinuous.”

Harry twisted his body around and saw a grindylow, a small, horned water demon, poking out of the weed, its long fingers clutched tightly around Harry’s leg, its pointed fangs bared – Harry stuck his webbed hand quickly inside his robes and fumbled for his wand. By the time he had grasped it, two more grindylows had risen out of the weed, had seized handfuls of Harry’s robes, and were attempting to drag him down.

The notion of Grindylows stems from Northern English lore; Rowling’s description was very vague, offering the creature designers of the film production wide creative freedom in their portrayal. Design ideas were most varied, ranging from frog-like to angler-like iterations, imp-like or goblin-like bodies, and variations with hybrid anatomy — torsos merged with fish-like tails, or tentacles. Eventually, the direction taken by the design team was the concept of “a cross between a nasty child and an octopus,” with a vaguely humanoid head (complete with piranha-like rows of teeth), torso and arms, ending in a lower body with a proportionally large paunch and an array of cephalopod-like tentacles. 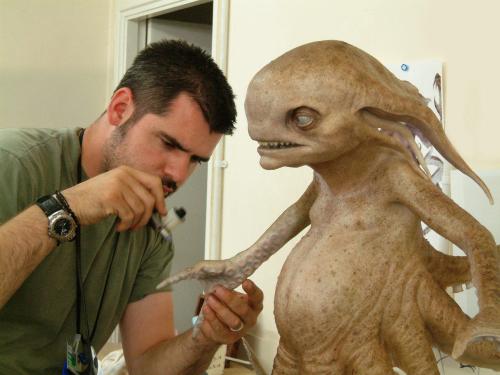 Once the design was selected, it was translated into three-dimensional fiberglass maquettes, which were then scanned to begin the creation of the digital model. Single Grindylows were animated manually, with challenges offered by their unique anatomy. Webbe related: “each Grindylow had an overall ‘squirty’ movement. We controlled each tentacle using dynamics and muscle systems to make it feel fleshy. It was a rigging challenge because the top half had a skeleton, but the bottom half could squash and stretch.”

Certain sequences called for swarms of the creatures attacking Harry; to that end, Framestore artists used the in-house ‘Choreographer’ animation system, which enabled them to create the frenzied flocking motion of the Grindylow swarms. Webber explained: “we couldn’t use a crowd system because we wanted control over each creature; and so we hand-animated each character in Choreographer. We broke Grindylows into layers to wrap them around Harry in the composite, then rendered them mostly in one go.”

For more pictures of the Merpeople and Grindylows, visit the Monster Gallery.

← Tribute to Carlo Rambaldi at the 2017 Romics
Thestrals →