← The Lake Folk
Monster Gallery: Harry Potter and the Order of the Phoenix (2007) →

The coaches were no longer horseless. There were creatures standing between the carriage shafts. If he had had to give them a name, he supposed he would have called them horses, though there was something reptilian about them, too. They were completely fleshless, their black coats clinging to their skeletons, of which every bone was visible. Their heads were dragonish, and their pupil-less eyes white and staring. Wings sprouted from each wither – vast, black leathery wings that looked as though they ought to belong to giant bats. Standing still and quiet in the gathering gloom, the creatures looked eerie and sinister.
-J.K. Rowling, Harry Potter and the Order of the Phoenix

For the film adaptation of The Order of the Phoenix, creature designer Robert Bliss maintained his Thestral concepts very close to the book descriptions — endowing a horse skeleton with tightly-wrapped skin, a beak, and membranous bat-like wings. The final film design eventually excised the fangs and manes the animals had in the novel — in order to ease aesthetic integrity. Creating the baby Thestrals was instead a matter of reverse-engineering the main design, with appropriate reference from foals.

From the selected design, sculptors Kate Hill and Julian Murray fashioned a small-scale maquette and a full-size sculpture of both the baby and adult Thestrals, producing wing and body configurations separately. Full-size models were created based on moulds of the maquettes and painted gray. “There was some question if we needed to do a paint job,” explained creature effects supervisor Nick Dudman. “Thestrals were supposed to be jet black, but if we had just painted them black they would not have looked real. We decided to produce a painted Thestral that was paler than the finished Thestral, showing patterning, veins and shading. The theory was that Stuart Craig could art-direct the subtleties, and then ILM could make the creature as dark as they liked.” The full-size maquettes were digitally scanned to obtain rough digital models that were then refined manually. Reference photographs were also taken.

The Thestrals were brought to the screen as entirely digital creatures, handled by Industrial Light & Magic. The creation of the digital Thestral in Maya was overseen by character rigging supervisor Eric Wong, and went beyond making a single model: two distinct models, one of the skeleton and one of the fully-fleshed animal were produced, highlighting the emaciated appearance of the creatures. “We typically just build a shell and then use shapes to simulate muscles and fat underneath,” said Tim Alexander, visual effects supervisor, “but in this case, we built the outer shell and also the inner pieces, the bones, and ribs for the skin to slide against.” He explained further: “the Thestral was an interesting creature to work on, due to its unique design. We first scanned a full size maquette that production had sent to us, and used the point cloud to model the geometry. We actually had to build two models, which was pretty unusual. Since the creature is basically skin and bones, it was very important for the skin to slide against the bones. So, using Maya, we built a standard model that represented the outer surfaces, and a high-resolution bone structure for the surfaces underneath. We utilized ZBrush to add a lot of details on that geometry.”

The modelling crew for the Thestrals was led by Ken Bryan. “Lana Lan, one of our modelers, built all the shapes and took the Thestral all the way through modeling, painting, and lighting,” said Alexander. “Ken did the same thing for a baby Thestral — modeled and textured it, but someone else lit it. We had the luxury of having enough time for them to do that.”

The Thestrals were animated through keyframe, with appropriate skin simulation. Subsurface scattering endowed the skin with a realistic semi-opaque quality on the body and translucent effect on the wing membranes. In order for the skin to slide over the bones and muscles convincingly, character rigging supervisor Eric Wong developed within Zeno (a multi-purpose CGI software) a PhysBam system that allowed to connect the skin layer to the skeleton underneath. The system attracted the skin to the surface, and at the same time allowed it to slide over the bones. Animation thus proved most difficult in concave spaces where the skin had to be It proved tricky for concave spaces where the skin had to be suctioned in while still sliding over it.”We used elephant textures to create wrinkles in the surface, then made it look glossy using subsurface scattering and indirect radiosity-style lighting.”

Depending on the specific movement, animation would either have to be increased or dialled back. “Sometimes, delicate movements in the keyframe animation would be lost through the simulation,” Alexander explained. “Depending on the shot, we would then either increase the animation, so that it read more through the simulation, or dial the simulation out of the area.” The wings were less problematic, as a part of the ILM crew had animated Saphira the dragon from Eragon about two years before they tackled the Thestrals. The gathered knowledge eased the animation of the creatures’ wings. 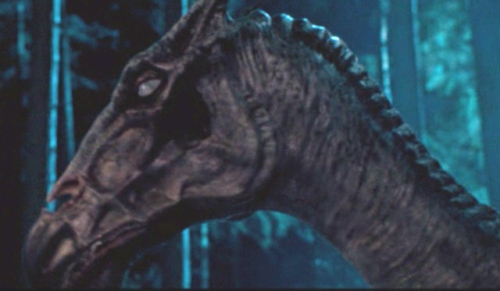 Walking cycles and animation tests were developed directly into forest environments to help define the Thestrals’ mood and stature as characters. Steve Rawlins, part of the crew, said: “the director wanted the Thestral to be quite elegant and majestic. That was tricky because we were essentially pulling a skeleton around with all the anatomy exposed, so it became very important to get all the musculature working. We builty a library of shapes that allowed muscles to fire and tense as the legs picked up and set back down. What really helped sell the believability was the way the scapula slid up and down and, when the Thestral’s foot hit the ground, all the weight fell into that area. That gave the creature a great sense of mass and helped drive the skin simulations.”

One of the challenges the digital effects team faced was to make the Thestrals — emaciated things with a monstrous appearance — look benign as well as realistic. “In terms of animation, the main goal was to make the Thestrals seem like peaceful creatures,” Alexander explained. “When Harry sees them hanging out by the water, the director wanted it to feel like a National Geographic episode.” Using reference footage of horses, animators gave the Thestrals natural motions, like little muscle flicks.

The inclusion of a baby Thestral was requested by the director to enhance the natural quality of the creatures. “David Yates wanted audiences to see that Thestrals were not exhumed living-dead creatures,” observed Rawlins. “He wanted to show that they bred and had young, so he came up with this wildlife documentary scene with the youngster.” The animation of the baby Thestral reaching the piece of meat thrown at it on the ground was based on a drinking giraffe, with the forelimbs put at an angle. For flight scenes of the third act of the film, the ILM crew used a similar approach to the Buckbeak flight scenes Framestore had provided for Prisoner of Azkaban, although obviously refined technologically. The actors were filmed riding motion control rigs, which were then replaced with the digital Thestrals.

“When you’re working on films about a fantasy world, it would be easy to stray into something that’s not believable,” concluded effects artist Tim Burke. “We want people to believe in these creatures. If they see Thestrals walking through the forest and think they’re real, we’ve all done our job.” 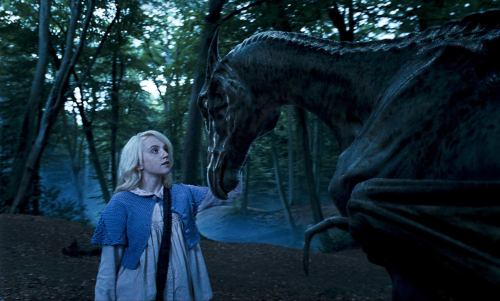 For more pictures of the Thestrals, visit the Monster Gallery.

← The Lake Folk
Monster Gallery: Harry Potter and the Order of the Phoenix (2007) →