← Monster Gallery: The Cabin in the Woods (2012)
Peter Benchley’s Creature →

Every five thousand years, the entire universe is threatened by the physical reincarnation of the Great Evil — an ancient entity from another dimension, whose coming in our world is triggered by certain planet and star alignments. The key to defeating this being is a weapon of divine design, which is triggered by the placement and activation of five Elements. A race of otherworldly creatures protects these Elements — they are the guardians of life: the Mondoshawans.

One of the finished Mondoshawan suits.

The Mondoshawans appear as eight-feet tall and five-feet wide beings, with a shiny metallic outer covering endowed with golden and copper-like tones. Their legs are thick and robust — giving them a penguin-like gait — and their arms are covered in plates. Several parts of their bodies emit light, either artificial light or bioluminescence. It is, in fact, unclear whether the Mondoshawans are artificial entities or biological beings. Each Mondoshawan displays a series of dorsal thorns. They are unique to each creature, and define their rank — other than aiding ventilation and communication.

The leader Mondoshawan — labeled as ‘Kommander’ in early script drafts — and John Bennett as the Priest.

Nick Dudman and his special effects team built all the creature effects for The Fifth Element — and the Mondoshawans were no exception. According to Dudman himself, they were the most challenging task for the team. “The Mondoshawans were the single biggest problem we were gonna have, primarily because of their size, and what they had to do, and what they looked like. They were rigid, metallic creatures.”

The Mondoshawans were built as creature suits; their building process, however, was unlike anything Dudman and his team had done before. The Mondoshawans were designed by illustrator Jacques Rey. According to Monique Brown, animatronic designer, good part of the complexity derived from the elliptical shape of the design. The Mondoshawan full-size sculpture was undertaken by Mark Godderidge and a team of sculptors, including Mark Coulier, who also designed and fabricated the arms and articulated hand mechanisms for the creatures.

The special effects team spent considerable time in actual planning for a proper understructure of the Mondoshawan suits. A foam mock-up test suit, featuring the basic design shape, was first built. “We stand back,” Dudman commented, “and we think, ‘what are we looking at? It’s crap!'”. The final material of the suits was in fact changed to an external covering of fiberglass. Large areas of the suits were moulded in mesh — something that aided internal ventilation. Due to the Mondoshawans’ height, from 7’8″ to full 8 feet, a minimal height for the actual performers was required. Seven 6’9″ actors, including Justin Lee Burrows and Richard Ashton, were cast as the Mondoshawans. 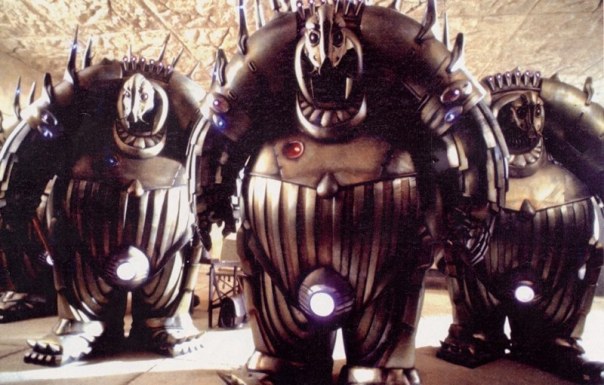 The final suit understructure featured a harness, which in turn held a cage-like steel structure —  the purpose of which was to support the upper half of the Mondoshawan. This expedient transferred the weight of the upper structure down to the performer’s hips, easing the movements of the actors. “When the performers agreed to do it,” said Monique Brown, “they had no idea what they were going into. And some of the performers were great about it, and others were like ‘I can’t do this’. And, in fact, we did have to change some of the performers — because they just couldn’t do it.”

The suits included a separate part for the head section — including the head itself, the neck and its base. Several ‘standard’ heads with basic movements were built, as well as a fully mechanized hero head. The heads were easily interchangeable, thanks to a simple sliding plate. the hero head was first constructed by John Coppinger, and later refined by Steve Wright. The animatronic mechanisms were built by Chris Barton; they included full neck motion and ‘lighting-up’ eyes. The vents — or vent-like structures — on the snout could move to simulate talking and breathing. The sight of the performer inside was completely obscured; to solve this issue, small monitors were installed right behind the head and neck mechanisms. The actor could see what happened on set thanks to an external camera, installed above the head, in the center of the suit. The camera simply transmitted footage to the monitor inside, enabling a more precise coordination.

Suiting up the actors on the day of shooting was an impressive process. “Getting the guy inside, into the suit,” said Dudman, “required a sort of C-shaped platform, like a docking bay. There were about three steps, that my crew could stand on.” The actors would have to wear the leg parts of the suit first; a safety bar prevented the legs from moving too far apart or too quickly. The actor would then have to enter the ‘docking bay’; it is here that the crew would put the understructure and other suit parts on them. Three crewmembers were needed to suit up each performer, and the process would take up to 20 minutes for each unit.

Once on set, in Pinewood studios, the actual filming of the Mondoshawans was not any less arduous than what preceded it. Each Mondoshawan was puppeteered by 4 crewmembers. Due to the considerable heat inside the suits, only short sequences could be shot singlehandedly. The most complex scene to film was the arrival of the Mondoshawan in the ancient temple. Dudman recalled: “when we did the scene, they were all walking down the corridor — there were 6 people, all with Walkie-talkies, [saying] ‘left of it, left of it, slow down, slow down!'” The coordination of all the performers was enormously complex to finally achieve as it is seen in the final film.

All the Mondoshawan suits were to be destroyed after production. The surviving Mondoshawan suit has sought refuge at the Prop Store of London. Other single parts of the other suits, such as portions of arms and head sections, were salvaged as well and sold to private collectors. Nick Dudman recalled: “The Mondoshawans were gonna be destroyed,” he said, “and in fact, more than that, the destruction process was gonna be videotaped — so that there would be video proof that these things were destroyed. I was understandably rather upset by this, so I went to Patrice Ledoux and Iain Smith, the executive producers, and said, ‘look, please, you know, can’t we keep them?’ And he said ‘No!’; ‘can we keep one? You know, it’s your property, you can sell it, but can I just keep one? And Patrice said yes — so, I’ve got a Mondo. It was lovely because they were such beautiful objects when they were finished, and it seemed a shame. Because we had such a nice time on the movie we actually got affectionate to these things. But, I’m glad we could preserve one.”

For more pictures of the Mondoshawans, visit the Monster Gallery.

Posted on 10/03/2013, in Movie Monsters and tagged Mondoshawan, Nick Dudman, The Fifth Element. Bookmark the permalink. Leave a comment.

← Monster Gallery: The Cabin in the Woods (2012)
Peter Benchley’s Creature →