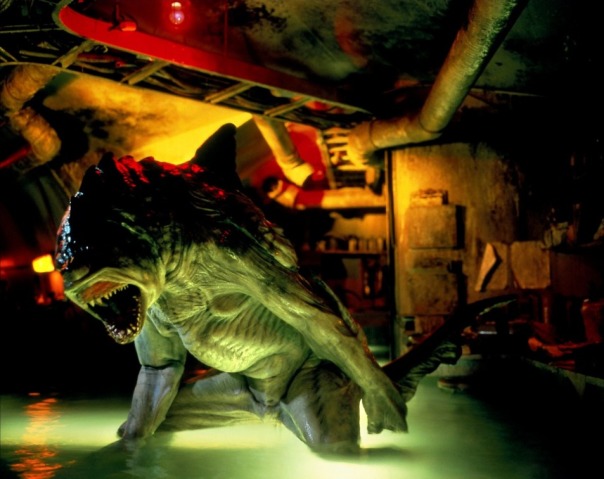 Indeed, Lewis was intrigued by the idea of a hybrid monster that would not as dangerous in water as it is on land. “My wife grew up in Australia, and she said that the first time she heard a shark horn on the beach, she grabbed her bag and ran up the beach and across the parking lot, until she realized, ‘wait a minute, this thing can’t come out of the water!’ That stuck in my head; and Peter Benchley came up with a tag line for this, having done Jaws. You know, with Jaws 2 it was ‘just when you thought it was safe to go back in the water…’. This is ‘now… you’re not safe anywhere.’ The concept of an amphibious creature that comes out of the water onto land and is capable of being bipedal is pretty scary.” 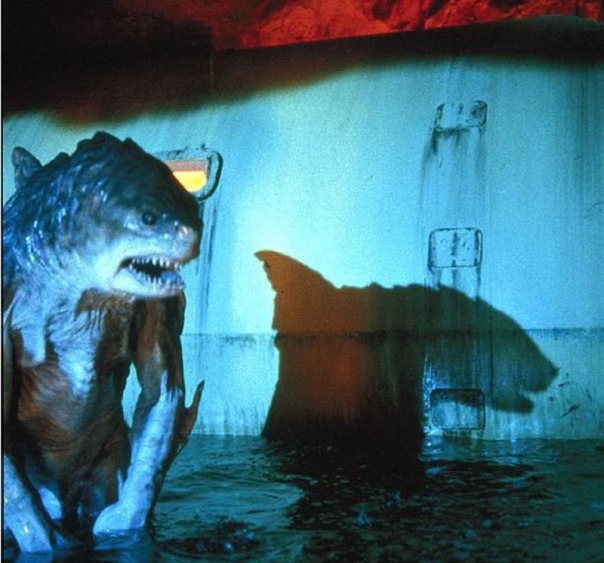 In the novel, the humanoid shark-dolphin-man hybrid was brought to life by an insane nazi scientist. This and some other aspects of the creature’s origin and story were altered for the film adaptation. Lewis commented: “the core story’s the same, but what I really tried to thread through it was a more credible underpinning to science. I was a biology major at Berkeley, so — a little knowledge is a dangerous thing — but I certainly called people that I knew in various departments there to talk about how early genetic engineering would work. Could you take varied species and cross-fertilize them, so to speak? And actually more interesting was an expression that was pounded into me in my biology classes, which is [‘Ontogeny recapitulates Philogeny’]. A lot of big words, but what it means simply is that during the embryonic growth in mammals, the organism goes through every stage of evolution of that organism in the nine-month birthing process. So what I was positing is, what if you actually took a human and stopped the process at a certain point? If, at the development of three months in the embryo, you burned out some genetic material so the brain wouldn’t progress the same [way], but the organism is allowed to continue growing to term?” 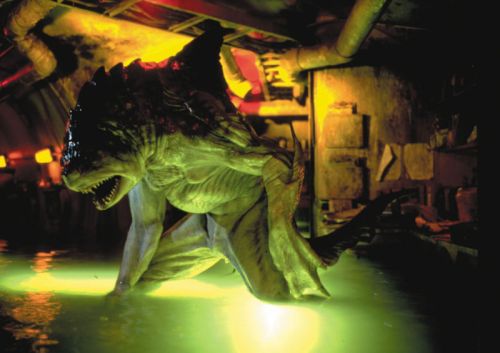 Lewis refers to an actual biological hypothesis, labeled as the Recapitulation theory: in the development process from embryo to the fully formed individual, an animal goes through stages resembling or representing successive stages in the evolution of its more or less remote ancestors. As of today, the recapitulation theory is not anymore considered potentially correct — although there effectively is a period in the development process of an embryo where it its morphology is influenced by its phylogenetic position. Lewis continues: “That is something that wasn’t in Peter’s book, but I thought it was a fascinating concept. It’s a fun area to play with: do we really have gills? Do we really have a tail? Do we really have fins? It’s a half-step fantasy, but it’s really not more of a half-step than Jurassic Park. So that was the science I wanted to imbue into the story that I don’t think Peter had the opportunity to develop. I discussed it with him before we went forward, and he said, ‘wow, that’s a lot better than what I have!’ He’s a fairly self-effacing guy.” 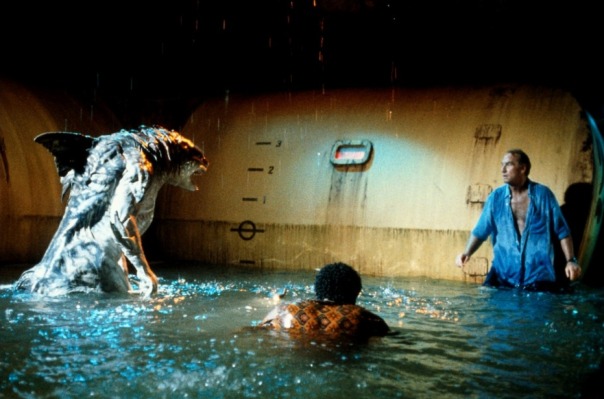 Stan Winston Studio was hired to bring the creature to life. Winston had precedently collaborated with the producers with the production of A Gnome named Gnorm — which he had directed. He was also an enthusiast of Peter Benchley’s work; he himself even considered directing at one point, according to Lewis: “he was circling around directing this at one point,” he said, “and then he was a little bit intimidated: it’s a fairly big undertaking, and he’s got his deal at DreamWorks. But he said, ‘Richard, if you’re gonna do an amphibious movie, I have to do it.’ And I said, ‘oh, I can’t afford you; I can’t afford the scope of a T.rex.’ And he said, ‘well, we’ll work it out.’ And he was true to his word, because his team loves to do this, they didn’t want someone to come and do a really shitty job of it.” Lewis also felt for the special effects team, due to the budget and time restraints they were going to challenge: “I think this was hard for him and his guys,” he continued, “because we do movies — certainly the big-scope movies — in around 100 days, and this was a 50-day schedule, so everybody had to tighten up a little bit.” 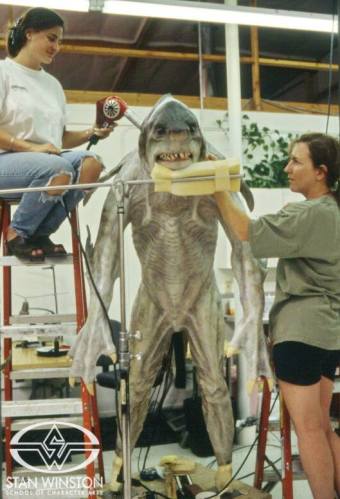 Mark ‘Crash’ McCreery designed the Creature, with total freedom over its actual appearance — under input from the director Stuart Gillard and producer Richard Lewis. The final design attempted to balance out between human-like traits and shark-like elements. Winston related: “what you don’t want to end up with is a ‘guppy man,’ — you don’t want it to be a fish with legs. So to come up with a design that balances out and looks right — that obviously has elements of shark and elements of humanity in it — is a difficult concept to attack. But we did so with fervor, and Crash did a beautiful job of conceptualizing the character.” 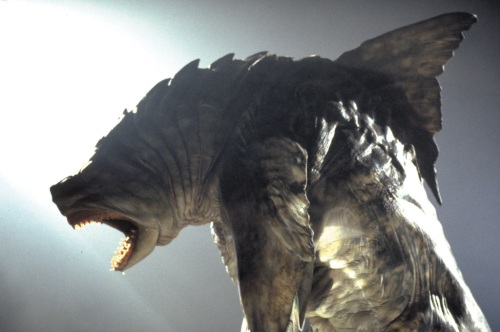 The Creature suit during a test footage session.

Lewis also commented on the design: “it’s not a shark that’s walking on land. it really has very little to do with a shark. We wanted to try to fool the audience into thinking it could be in the beginning, but then it becomes quite clear that it isn’t. it’s bipedal, but it’s primordial, and Stan doesn’t pull any punches.” Gillard added: “You know, when you hear the premise about a shark that walks on land, you go, ‘whoa, man, what’s this gonna look like?’ And that’s why I didn’t come aboard until I knew Stan Winston was involved. Given the history I have with the production company, I knew we’d have quality going in, but with the creature being the star, I really wanted to make sure that it was scary and not laughable, and I knew that with Stan we’d have something good.” 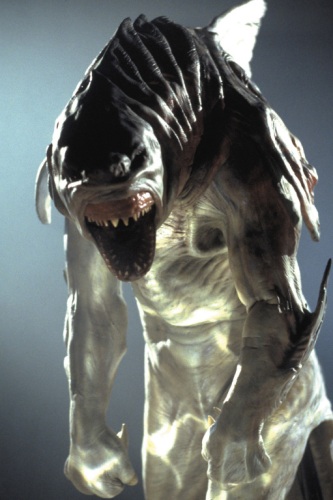 Once the final design was actually selected, the full-size sculpture of the Creature was undertaken by Nick Marra and William Basso. The hands were sculpted by Rob Ramsdell, who was also responsible for the final paint scheme. The beast was then fabricated by a crew headed by Beth Hathaway. Richard Landon and Jon Dawe, among others, were instead in charge for the mechanical features of the animatronic head. Brian Steele performed inside the monster suit, in what was one of his first roles as a suit performer (the first being The Relic a year before). 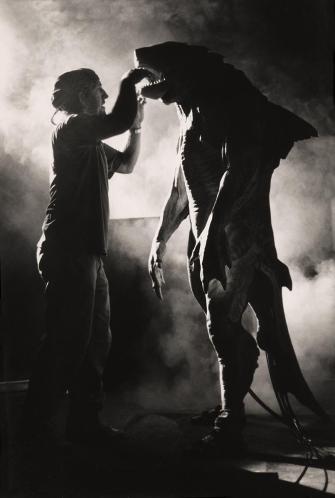 On set, Crash McCreery aids Brian Steele as the monster.

The head of the Creature was puppeteered both via radio-control servomechanisms and the performer’s actual head. The mechanisms were devised to be waterproof — for filming sequences where the monster would rise from the water. Its dorsal fin was cable-operated and actually ‘collapsible’, meaning it could go into ‘idle’ position when not in use — much like a frill. Rough leg extensions were used for the few shots where the Creature is seen fully. 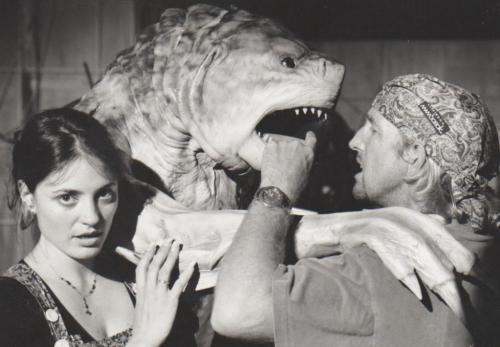 Beth Hathaway and Crash McCreery support the monster on set.

The swimming stage of the creature, still devoid of arms and legs, was obtained from the mould of the land Creature sculpture — which was appropriately reassembled. On the side of the ‘underwater’ Creature, growing arms on the underside are already visible, as well as bulges on the side suggesting legs. The arms would, in fact, grow in the area under the pectoral fins, which are still visible in the land stage of the monster. The animatronic featured rough mechanisms for the scenes featuring this underwater stage. 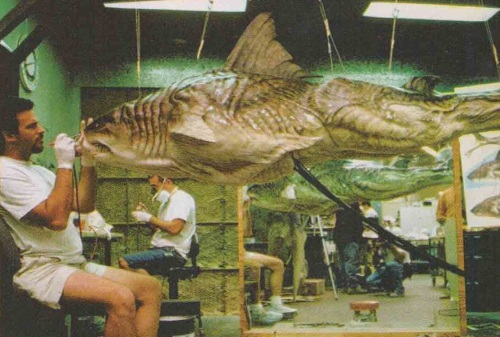 The ‘underwater’ creature. Notice the growing arms resting on the underside of the monster, and bulges from which the legs will sprout out.

For the Creature’s gruesome demise, a combination of computer generated imagery applied on the suit and practical guts and fluids (including latex, KY Jelly, and therma-gel) were used. 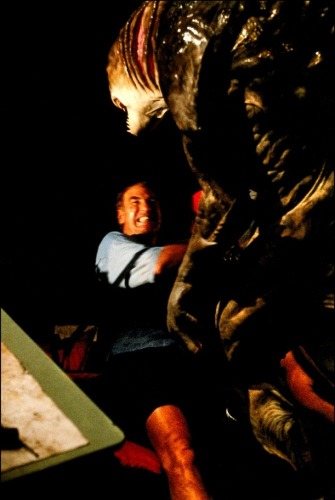 For more pictures of the Creature, visit the Monster Gallery.