← Godzilla 2 Script Treatment
The Desolate One →

“At the side of the pit, an iron door rumbles upward and a giant, fanged RANCOR emerges. The guard runs to the side of the pit and tries futilely to scramble to the top. The hideous beast closes in on him. The Rancor moves past Luke, and as the guard continues to scramble, the Rancor picks him up and pops him into its slavering jaws.”

– Lawrence Kasdan and George Lucas, Return of the Jedi script

This is how Return of the Jedi introduces the Rancor, Jabba the Hutt’s massive ‘pet’ creature residing in a pit in the crime lord’s palace — used for executions and entertainment.

Concept art of the Rancor sequence by Ralph McQuarrie.

The script for Return of the Jedi called for a terrifying juggernaut, but gave just vague guidelines — it did not go far in describing the beast itself. This allowed Phil Tippett and his crew of Industrial Light & Magic wide creative liberties on the design of the Rancor. Tippett and McQuarrie envisioned it — a Star Wars version of the dragons from medieval folklore — as “a cross between a bear and a potato”: a hunched monster with pebbly and wrinkly skin.

To bring the creature to life, Tippett initially planned to use the go-motion technique developed and successfully employed by his team for the AT-AT machines in The Empire Strikes Back. Initially, George Lucas opposed this approach and instead wanted the Rancor to be played by a performer in a monster suit. “George was  really adamant that we were going to do it as a man in a suit,” Tippett said. “It was gonna be like a really cool Godzilla.” 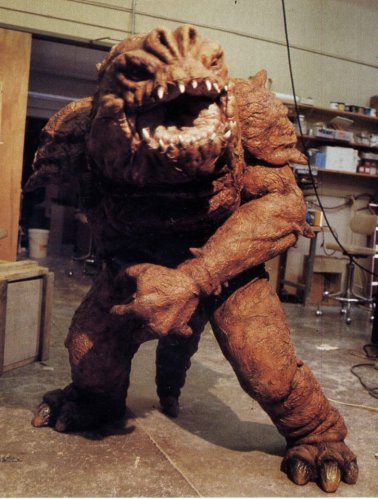 “We’re gonna do the best man in a suit, ever”, said the director before actual work on the creature began. The costume included arm extensions and rough mechanisms that allowed its mouth to open and close and its eyes to blink. The design’s proportions were heavily altered, resulting in longer legs, smaller arms, and a bigger head. Phil Tippett himself tested and wore the finished suit for pre-visualization. The results were ultimately judged as unsatisfying. “The suit was just too ungainly for the design,” Tippett said. The artist added in Empire of Dreams: “it never looked that great, not in the way we did it; so at some point George was like ‘yeah, let’s do it in another way'”.

With the option of a suit gone, the special effects team resolved the issue by going back to their original intention — or, at least, a similar approach. The Rancor was ultimately built as a wire-framed rod puppet, with flexible latex skin over a metallic armour. The creature, sculpted by Phil Tippett and Randy Dutra, was about 18 inches tall and was animated in a 30 inches tall miniature set of the creature’s pit — shot in the workshop in California. The scenes featuring Mark Hamill and the Gamorrean guard suit were shot in a separate set in London, with a life-size hand stand-in for the shots with Luke Skywalker in its grip.

The Puppet was slimmer and more streamlined than the suit, and its appearance was in many ways adherent to that of the maquette — although it still presented some slight differences in regards to its colour scheme.

Phil Tippett adds the last touch-ups to the Rancor model, before its grand entrance.

The Rancor was controlled by three puppeteers: Tom St. Amand moved the arms, which housed mechanisms that allowed the creature’s fingers to move; David Sousalla controlled the legs; the head, upper body, and mouth were instead hand-animated — through a fissure in the backside of the model — by Phil Tippett. 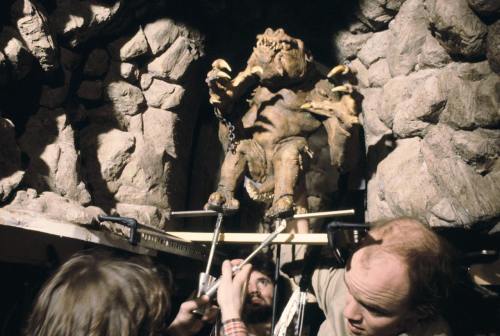 The Rancor on set.

To give the impression of the Rancor’s massive size as it is portrayed in the film, the Puppet was filmed with a higher frame rate, which went from 48 to 72 frames per second. This expedient, which made the creature’s movements look slower and heavier, enhanced the footage with a more convincing sense of its mass. It also proved to be particularly difficult to achieve: even the shortest shots featuring the creature sometimes needed up to 70 reshoots, due to how fast it had to be animated. “We had to move three times faster just to get a move down,” said Tippett in an interview. “It was funny coming right off the walkers [AT-ATs] which you have to approach as a stop motion animator. For the Rancor, we had to use the same sort of motions that an animator would — because you can’t just stop and start a move. You have to fade gently in and out of moves. That can be very difficult when the scene you’re doing is 48 frames long. You have to make all your moves — the creature looks up, looks to the right and opens his mouth — in a third of a second. It doesn’t give you a great deal of time to finesse it like you can when you have an hour or so between frames. It was real interesting thinking on your feet as opposed to thinking like an animator — like a snail.” 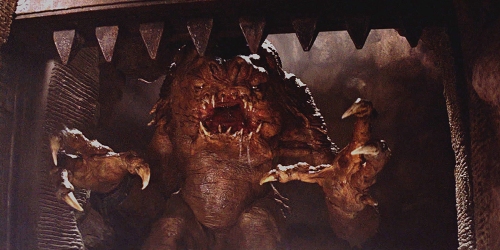 For more pictures of the Rancor, visit the Monster Gallery.

← Godzilla 2 Script Treatment
The Desolate One →