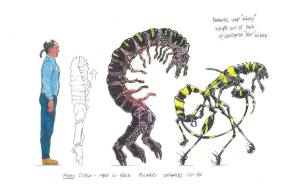 Scum of the Universe – Men in Black, Part 2

It was during production that both Sonnenfeld and the producers realized that the MIB headquarters looked empty — as in they lacked a consistent alien presence. As originally envisioned, the headquarters had to represent a 60s airport or way station, and yet the footage shot up to that point only displayed few alien characters. The producers thus decided to introduce more exotic creatures into the scene — in the style of the iconic Star Wars cantina sequence — and commissioned additional creature effects.