END_OF_DOCUMENT_TOKEN_TO_BE_REPLACED

Special: The Plant Conquered the World

In the theatrical cut of Frank Oz’s Little Shop of Horrors, Audrey II is electrocuted; the electricity triggers a reaction that makes the plant explode. At the very end of the film, with Seymour and Audrey married, the camera zooms on their garden — revealing a little smiling plant. The original ending of the film reflects that of the musical — and ends the story in a considerably bleak note. Conway said: “this ending was to be the cinematic equivalent of the stage ending; a total catastrophe in which the plant basically takes over the world. Mike Ploog did great storyboards for the sequence that were reminiscent of early-sixties horror movies, which I love.” After Seymour saves Audrey from the plant’s jaws, she reveals her love for him — but in a death wish she tells her lover to feed her to Audrey II, fulfilling her wish to be “somewhere that’s green.” Wishing Seymour the success he deserves, she dies in his arms. Seymour then brings her corpse to the plant — in a scene that Oz compared to “a ritual sacrifice” — and does what he was told. He even tries to touch Audrey’s hand as she descends in the plant’s maw but fails to do so; the scene is too much to stand for him, and he quickly evades the shop. He climbs a ladder to reach the top of a nearby building — attempting to suicide. As he is about to jump, he is stopped by Patrick Martin, who shows him a newborn Audrey II, obtained from harvested clippings of the original plant.

END_OF_DOCUMENT_TOKEN_TO_BE_REPLACED 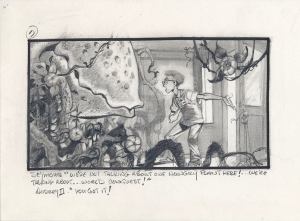 The Little Shop of Horrors began as a low-budgeted film, directed by B-Movie veteran Roger Corman. Based on a $30.000 budget and completed in a very short time, it came to receive — to Corman himself’s surprise — a wide cult following. The story of Seymour Krelborn and the voracious man-eating plant resonated within people’s minds, to the point where a Broadway rock-and-roll musical adaptation was created in 1982. Based on this very musical was Frank Oz’s 1986 film, Little Shop of Horrors; the 26 million dollar budget  — close to a thousand times the original film’s — assured a wider liberty to the filmmakers involved.