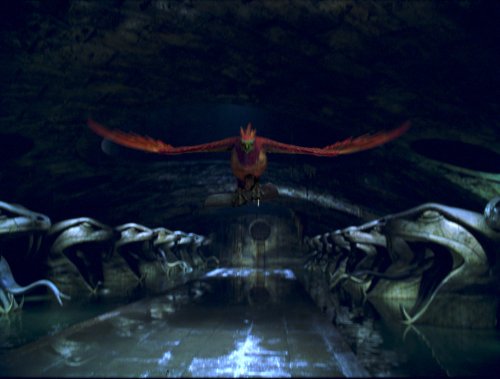 A crimson bird the size of a swan had appeared, piping its weird music to the vaulted ceiling. It had a glittering golden tail as long as a peacock’s and gleaming golden talons, which were gripping a ragged bundle.

A second later, the bird was flying straight at Harry. It dropped the ragged thing it was carrying at his feet, then landed heavily on his shoulder. As it folded its great wings, Harry looked up and saw it had a long, sharp golden beak and beady black eyes.
-J.K. Rowling, Harry Potter and the Chamber of Secrets

Albus Dumbledore’s Phoenix was aptly-named after Guy Fawkes for his life cycle, which involves a periodical self-combustion. Adam Brockbank was responsible for the design of the Phoenix for the film adaptation of The Chamber of Secrets, in all of the three stages it is seen in — dying adult, hatchling, and reborn adult. Brockbank carefully researched classical illustrations of Phoenixes, as well as adequate natural reference from real birds; large birds of prey were mostly used as the base for the design — in particular, sea eagles and vultures. Brockbank also endowed the creature with an exaggerated feathery crest to give a sense of nobility. 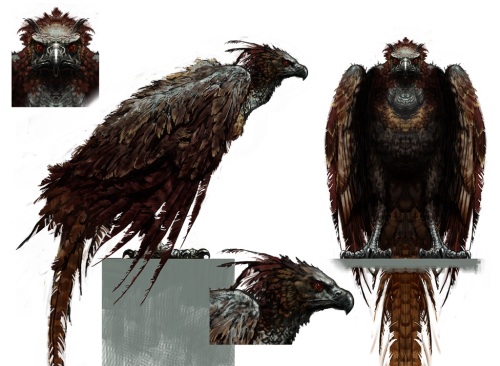 The vulture influence was most applied in the old stage and hatchling stage — with a stretched out neck and layered wrinkles. To establish Fawkes’s feather disposition and patterns, Brockbank was provided with stock feathers from pheasants and other birds to rearrange into various compositions and layering schemes.

In regards to colour scheme, Brockbank maintained the design close to the book descriptions, with fiery tones like burned oranges and dark reds. In another reference to real birds, Fawkes’s underside is golden-coloured and bright, whereas his top is darker-coloured. A burned-out match was used for additional colour reference. Darker tones were used for the dying stage, and the hatchling stage was established to have a chick-like pink colouration mixed with the gray of the ashes. 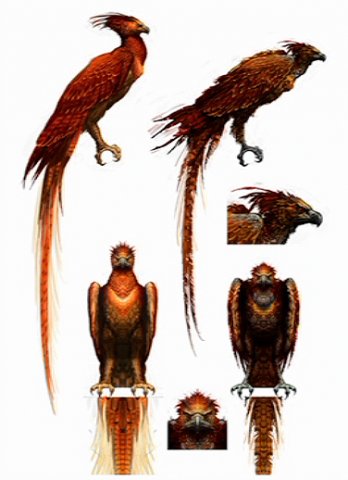 Side-by-side comparison of Brockbank’s concepts for the young, healthy Fawkes and the dying Fawkes.

Once a final design was selected, Brockbank’s illustrations were passed over to Nick Dudman’s special effects team. Three animatronic versions of the bird were devised, one for each stage of Fawkes’s lifecycle. Dudman explained the perceived importance of a physical puppet that could interact with the actors: “computer-generated effects do the things that we physically can’t, but what we do with practical effects is create a sense of interaction that sometimes might be lost with CG.”

In the scene where Fawkes is introduced, Harry first sees the old and withered Phoenix — a full-size puppet. The mechanisms animating the creature were devised by Josh Lee and Andy Roberts. Dudman related: “the birds looked like the Terminator on the inside, they were so stuffed with gear. We had a nictitating membrane in the eye, which could drop a tear; the wings folded out, and it could cock its head and slide along the perch.”

Fawkes’s elaborately-coloured feathers were supervised by Val Jones. “Every feather was dyed and art-worked,” Dudman said. “It took months to do, and the whole place was covered in feathers; but it was a lovely thing when it was finished.”

According to Dudman, the puppets were so convincing that actor Richard Harris thought they were real birds trained for the production. He recalled: “Richard Harris came over to me and my chief Fawkes operator, Chris Barton, at one point, and told us how amazed he was by how well the bird was trained. I told Richard that Fawkes was, in essence, a puppet, but he wouldn’t believe me. So I pressed a control button, bringing Fawkes to life. Richard was absolutely gobsmacked. I don’t think I could have received higher praise.”

Concept art of the hatchling Fawkes by Adam Brockbank.

Fawkes bursts into fire in front of Harry — a combination of a practical fire effect and digital compositing by MPC — only to be reborn from his own ashes. A full-size hatchling animatronic was used for the sequence.

For later scenes, Fawkes was portrayed by a second adult animatronic — with the same mechanics as the ‘old’ version — which was combined in the Chamber scenes with a digital version provided by Framestore.

The digital effects artists met more than one challenge. The Phoenix was manually built, instead of being a refined digital scan. The digital model had to match Dudman’s practical Phoenix — a problematic process, since the puppets had not been sculpted with regard to flight, as they only had to be seen standing or sitting on a perch. Dudman said: “we built a bird with wings that were folded or only opened halfway. In hindsight, we should have constructed it in flight, as well. The CG group had a lot of trouble with it.”

Using proportions from the animatronic proved to be unfeasible. “When we pulled the wings out, it looked like a turkey,” said animation supervisor Michael Eames. “We had to devise a method to suck the body in and rescale the legs to make him more graceful. When he was in the air, we could proportion him any way we wanted; but there were shots where he landed, folded his wings, and then we cut directly to the animatronic — so he had to be recognizable as the animatronic.”

A custom system in Maya allowed the digital model to be tweaked by enlarging or shrinking its body parts separately. Adam Lucas modelled and rigged the creature. “Changing shapes is normally simple,” Eames explained, “but Fawkes is a bird, and anything we did in geometry affected the feathers — so we had to scale the feathers independently.”

Justin Martin and a software team devised a system in Houdini to match the digital feathers with those found on the puppet versions. A ‘guide hair’ established the position of the feathers, which were then generated based on parameters assigned to the hairs. Sally Goldberg, part of the crew, related: “guide hairs in the front end represented where feathers would be, and Ben White used those to groom the bird to match the animatronic. The feathers were put onto the body like layered roof tiles. Each feather, on a frame-by-frame basis, was put onto the feather below so it never intersected. If the feathers were going around a concave bend, all would sit perfectly on each other; and on a convex bend, they would thin out nicely.”

Position of the feathers was calculated for each frame of animation. Visual effects animator Mark Hodgkins explained: “the custom software would manually lift each feather, one at a time, then, using collision avoidance, project the feather down, allowing individual feathers to move and slide over each other, giving it a more complex, feathery look. It wasn’t that bad, actually. The bird was in ten sections so we could use ten machines for each frame.” Rendering of the feathers took place in the final stages of the process; custom shaders endowed them with a subtle sheen replicating the appearance of the animatronic. Actual animation of the flying Phoenix was based on footage of real birds, in particular on the flying motion of a turkey vulture and a blue macaw.

Fawkes makes a cameo in Harry Potter and the Order of the Phoenix, for which an entirely new digital model was devised; it was reused in Half-Blood Prince, for the final sequence where Fawkes leaves Hogwarts following the death of his master.

For more pictures of Fawkes, visit the Monster Galleries: