Although Critters was released two years after Joe Dante’s Gremlins, director Stephen Herek maintains that the script for the film was originally written by Dominic Muir far before Dante’s film entered production; Gremlins did, however, serve as a catalyst to greenlight Critters: Herek unsuccessfully attempted to sell his project to various studios, but it was only after the release (and considerable success) of Gremlins that New Line Cinema was willing to produce it. Herek thus had to heavily modify Muir’s script in order to significantly decrease the similarities between the two stories.

To portray the titular, voracious aliens, producer Rupert Harvey had to find special effects artists that could deliver every demand of the script within a tight production schedule and budget. Ultimately, the task was given to the Chiodo brothers — Charlie, Steve, and Ed — and their small crew of a dozen artists.

One of the original Critter concept drawings.

The entirety of the Critter effects was designed and constructed for only $100.000, a fraction of the film’s total 2 million budget. In addition to that, the special effects crew only had ten weeks to devise the effects. The Critters — or Crites, as named in the script — were designed by Charlie Chiodo as hirsute Monsters, with small limbs, disproportionately large maws with triple rows of teeth, and glowing red eyes. Once the design was approved, it was turned over to Steve Chiodo, who sculpted the maquettes and, aided by other sculptors, all versions of the Critters. 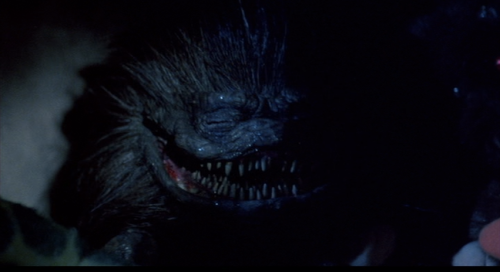 The tight production schedule also meant that a conventional foam latex skin for the creatures — the industry standard at the time — would be too time-consuming, since it necessitated at least a day to be fully prepared. The brothers thus devised a less expensive and quicker solution — a thin latex skin laid over a two-part urethane foam, which only needed a few minutes to set and was also more resilient. “It’s not quite as flexible as regular foam,” said Charlie, “but it lasts forever.” With this expedient, the special effects crew was able to pull up to six Critter bodies per day. The skins were painted with rubber cement paint, and covered with real moose hair which the brothers obtained from a taxidermist. Charlie explained: “none of the synthetic stuff looked good to me; it was expensive, and the hide is thick and tougher to work with, but it looks like a real animal.”

Ed Chiodo collaborated with Dwight Roberts in conceiving and building the mechanics for the Critters. The main puppets were full-sized 13″ models, with radio-controlled eyes and blinking eyelids, cable-controlled faces, arms and hands, as well as bladders in the throat and chest to simulate breathing. For the Critters’ eyes, clear plexiglass spheres wre coated with reflective scotchlite material in the back. On the set, a rig attached to the camera aimed a red light into the eyes, which bounced back to the camera lens giving the characteristic glowing red effect seen in the film.

Although the script demanded for eight Critters, the budget and time did not allow for more than four hero puppets. To resolve this issue, the brothers developed a series of prosthetic appliances (such as scars, deformed facial features, hairy eyebrows, and squinted eyes) that enabled each hero puppet to double as two characters depending on the sequence that had to be shot. Whenever more than four Critters are seen in the same shot, stunt puppets were used in the background.

Other than the hero and stunt models, a number of puppets with specific functions was also built: Critters that rolled onto themselves, remote-controlled rolling-ball Critters, Critters that could shoot their venomous quills, and a special puppet whose cheeks could puff — for the scene where one of the aliens swallows a cherry bomb. Since most of the puppets did not have functional legs, a special ‘walking’ Critter was also devised. Other puppets included hand puppets (used mostly for biting scenes) and stunt puppets that could be “thrown like a football” at an actor. 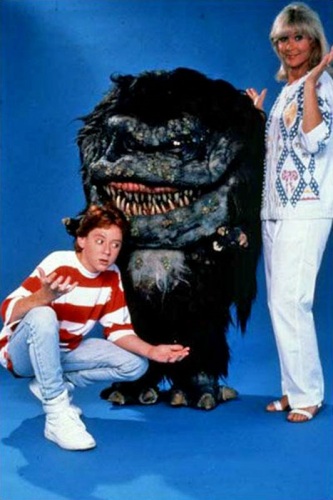 During the film, one of the Critters grows exponentially. To portray this leader Critter, a 26″ puppet was built; and as an extremely late assignment, the brothers were also asked to build a 4′ tall suit to be worn by a midget. The suit was only intended to be seen in quick cuts, but it was actually featured prominently in the film’s finale. “They didn’t give us the time or money to do it,” Charlie said. “The costume was just a quick, throwaway thing; they wanted to show something big. It looked alright, but there were no mechanics budgeted for the face; it didn’t move.”

Actual shooting also proved to be a challenge: “the schedule was crazy,” Charlie said. “They were trying to jam a hell of a lot of special effects and puppet work and action into a very short period.” Up to seven puppeteers were needed at once under the set floor to operate one of the main hero puppets. Steven was the principal puppeteer, and Charlie operated the eyes. The situation became particularly difficult when directions were being given at the puppet itself instead of at the puppeteers: “we’d have seven people below the stage floor, but up on top they only had one puppet,” Ed recalled, “so they’re yelling directions at the puppet. It was frustrating. There was a lot of yelling and screaming.” 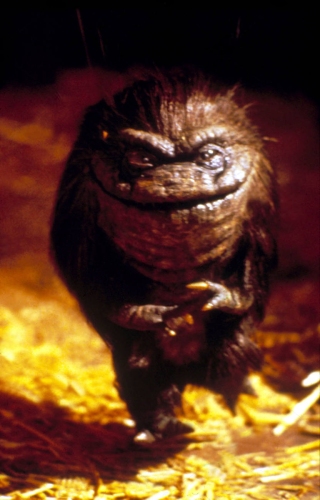 With similar issues, filming fell behind schedule, with creature effects sequences continuously getting pushed back until a specific second unit was actually established with director Mark Helfrich. “Unfortunately,” Charlie said, “he wasn’t familiar with the puppets, and was asking them to do things that they weren’t specifically designed to do.” The clashes, however, did not last long: “in the end, Herek was happy, and the second unit director became happy when he got familiar with the puppets and saw what they could do,” Charlie continues. “You make concessions along the way. There is an economic reality, after all — you have to get the film out.”

Despite the shortcomings, the brothers remember the project fondly. Steve said in an interview that “I have been fortunate to work on a number of memorable movie moments in my career so it’s difficult to choose just one. I’ve enjoyed many projects for different reasons. […] Critters was the first movie Chiodo Bros was the key effects company on, responsible for designing the creatures, creating and performing a wide range of special effects for.” 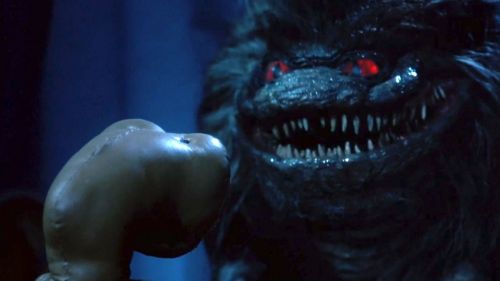 We want the Crites! Visit the Monster Gallery.