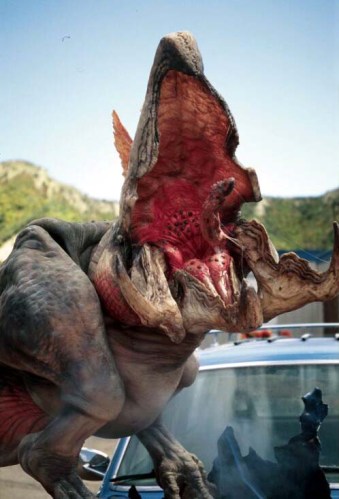 Back in 2002, I was a small kid watching Free Willie on a local channel. During an ad intermission, a trailer was broadcast for what was coming afterwards. It didn’t have a hard time selling it to my young eyes — “monsters from beneath the Earth! Now they’re back, badder and hungrier!” were all the words I needed to hear. The film was Tremors 2: Aftershocks and it may very well be the reason Monster Legacy has been and continues to be a thing since 2011.

END_OF_DOCUMENT_TOKEN_TO_BE_REPLACED

Monster Gallery: The Beast from 20.000 Fathoms

Main Article: The Rhedosaurus Also visit the Photobucket folder with screenshots from the film.

In 1951, Ray Harryhausen was approached by Jack Dietz for what would eventually become his first solo effort of creating special effects for a theatrical motion picture — The Beast from 20.000 Fathoms. In reality, Harryhausen had already made the majority of the effects sequences whilst working on Mighty Joe Young, with his mentor, Willis O’Brien. The film, produced independently on a tight $200,000 budget, was the first cinematic story to portray a Monster antagonist brought about by an atomic bombing. Sold to Warner Bros., The Beast from 20.000 Fathoms proved to be a successful motion picture and spawned the Monster mayhem of the 50s, along with The Thing from another World.