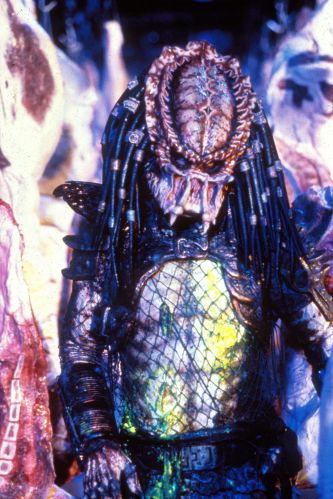 From a tropical jungle to one moulded in concrete, the new hunter in Predator 2 chooses Los Angeles as its hunting ground. “The fantasy I always had was to put the Predator in another kind of jungle,” said writer Jim Thomas. “An urban jungle.” The Thomas brothers returned to craft the story of the sequel. Many of their ideas and concepts for the first film could ultimately not be brought on screen. With Predator 2, the Thomas brothers had the chance to implement them into a new story, with the reassurance that — given a more appropriate budget and production schedule — they could actually be brought to life. “Because of the nature of the first film, we had a lot of detail and backstory about the Predator that we had to leave out,” said Jim, “but we’re including all those missing elements in this one.”

The writer further elaborated: “we had a wealth of background about the Predator that, for one reason or another, we weren’t able to get into the first film. With the sequel, we’ve been able to tell all the backstory and basically catch up. For instance, we discover that the Predators are a race of hunters and sportsmen who’ve been visiting this planet for 700 years. We’re able to show his spacecraft for the first time and basically get down to the mechanics of what he does. We explain to the audience in no uncertain terms tha the creature is not a psychopatic monster and that its motives and agenda are pure.” The film thus acts as a “bible” from which any sequels would be based upon. 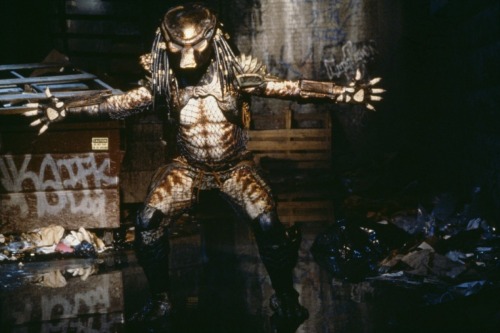 The new film delves more into the creature’s characterization. The Thomas brothers envisioned the new Predator as a different individual — younger and more reckless than its predecessor. Jim Thomas related: “it’s obviously not the same creature. This one is more ambitious, which is why it chooses an urban setting for its hunt.” He also added: “what we see is that the creature is not a psychopatic monster. He’s pure in what he does. There is a scene in which he comes upon a little boy with a toy gun. He scans the gun, sees the boy is not a threat and leaves him alone. His aim is a challenging hunt. And in the drug dealers he finds that challenge.” 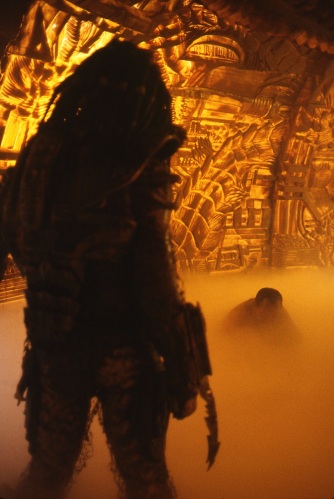 According to Kevin Peter Hall — returning in his unfortunately last role as the monster — the new Predator “is a different creature. He’s younger, a bit more undisciplined and a lot more athletic.” Director Stephen Hopkins also related: “he is quite honourable. He’s a mysterious, murderous creature, but he’s also a creature who lives by his race’s time-honoured rules and traditions of the hunt.” The director also described the character as “this mysterious kind of honourable character, this Gothic presence with a definite agenda who stalks the futuristic skyscrapers of Los Angeles.” 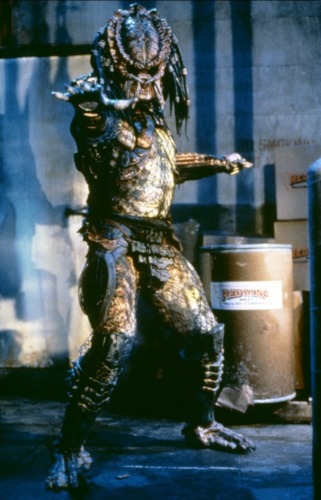 Stan Winston’s effects company was brought in again to give life to the new Predator. Unlike the hectic conditions the effects artists were forced to work within for the first film, this time they were allowed to work within a normal schedule. Much like the story, they were also able to reuse ideas that could not be realized for the first film. Predator 2 also marks the first film design work of famed concept artist Mark ‘Crash’ McCreery — who redefined the look of the Predator for the new story. 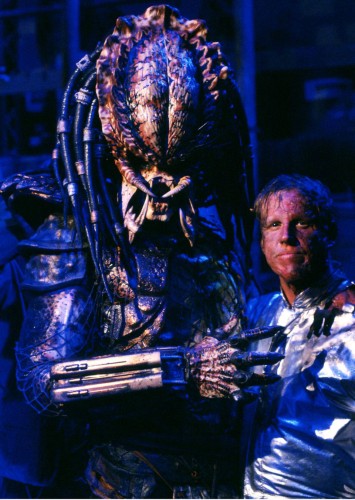 Director Stephen Hopkins wanted to distinguish the new Predator from the original, updating it with a “more urban and hip design,” keeping the overall anatomy consistent but implementing new colour schemes and weapons. “The director wanted this Predator to be more colorful, with flashier, more intricate weapons,” said Shane Mahan in The Winston Effect. “The design of the Predator’s head was also altered a bit to make it look like it was a different individual – the same species, but a different character. It was steeper and a little shallower. We didn’t just want to pull out the old mold from the first movie and paint it differently, because we thought audiences would detect that.” 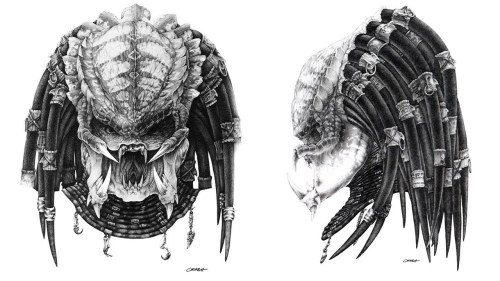 The special effects team found inspiration in the wide diversity found within reptiles, and in particular snakes.  “The concept is the same,” explained Stan Winston, “the difference is this is a different individual. A different individual of the same species. There’s a snake, a snake, a snake, but they’re all different, the colouring is different, different parts of their characteristics, facial structures, many differences.” The creature’s appearance was in fact inspired by snakes in both its texture and colour scheme, which again indicated a younger individual. “Because Kevin has taken off some weight,” Winston related, “we’ve been able to build a sleeker body. We’ve also changed his colour and skin texture to indicate a younger, more fiery creature than the first.” 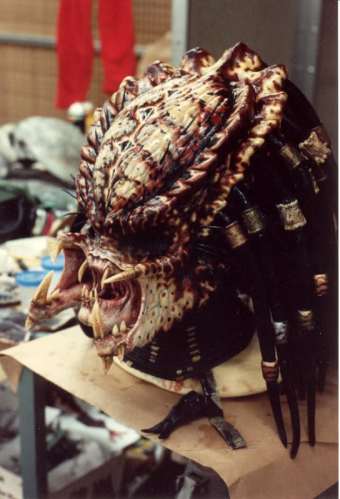 The Predator’s head was refurbished with “a horned brow ridge,” as well as other cosmetic additions: thorn-like protrusions were added to its mandibles, the lower ones of which feature evident gums — as opposed to the first Predator’s, which just blended with its outer skin layer. “We’ve strengthened up his mandibles a bit and given his tusks more character,” said Winston. More tribal ornamentation was added to the overall aesthetic of the creature. 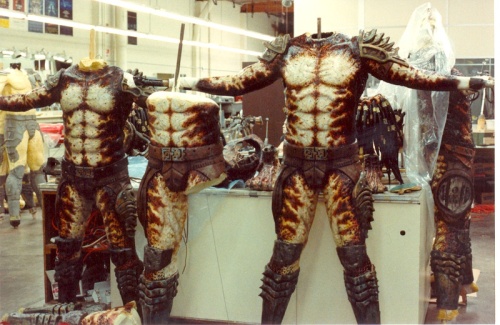 The sculpture of the Predator’s body incorporated only basic armour pieces. This enabled the artists to dress moulds of it with different additional armour pieces and weapons at will. The hunter was given a forked tongue, a concept originally devised for the first Predator but unrealized for reasons of time and budget. The special effects team built two suits, a stunt head, and a hero head — as well as an insert puppethead and torso of the creature, used for extreme close-ups of the Predator’s face. A puppet head allowed more space for internal mechanisms animating the face, thus increasing the detail of motion — such as when the Predator ‘talks’. 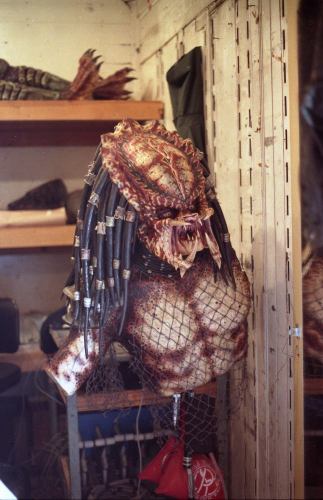 Various insert creature portions were built. Insert Predator legs that produced sparks were used for close-ups of the falling Predator during the final fight. Portrayal of the left arm-less Predator was achieved with a detachable arm mounted on a suit devised for stuntman David Smith, who portrayed the Predator in most scenes of the film’s finale. 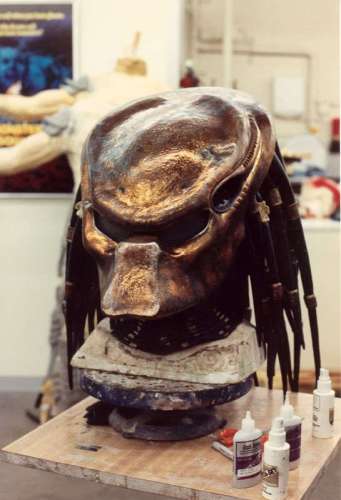 The new mask was refined from a discarded concept design for the original film — a more angular design combined with a bronze-based colour scheme. A stunt foam latex helmet and hero fiberglass helmet were built. The new armour featured more ridged patterns, and generally remained consistent with the color scheme of the mask. Much like the forked tongue, several weapon ideas proposed for the first film — but eventually discarded — were recycled for the new project. 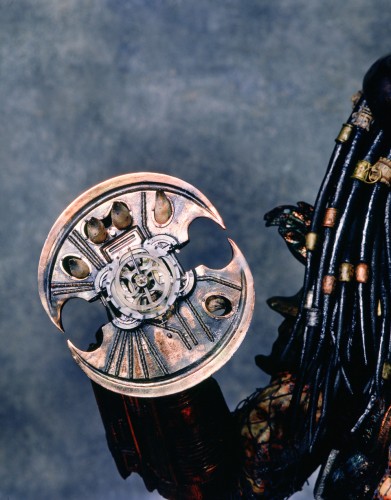 Accompanying the wristblades and shoulder cannon — which was refurbished with a more streamlined appearance and a ridged design — a whole new set of weapons aided the Predator in Predator 2. the hunter’s spear was built in four versions: hero, stunt, and two telescoping spears — one that compressed halfway through and one that reprised said motion, compressing from halfway through to fully compressed. The smart disc and the net launcher could attach to different parts of the Predator’s armour, located, respectively, in the right thigh and right calf. The spear-gun, another recycled idea, was housed in the left gauntlet. 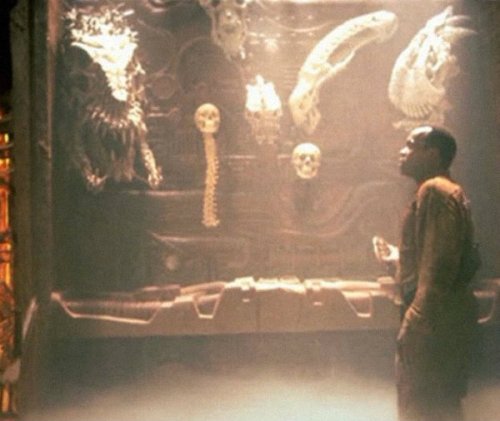 In the original scripted climax of Predator, Dutch was to enter the creature’s ship — and witness a wall of hunting trophies. This was another reused concept for the sequel, where Harrigan takes a moment to witness a wall adorned with skulls from the various intergalactic hunts of the Predator’s tribe. Each and every skull was assigned to a single Winston Studio artist — including Steven Fuller and Len Furge — to sculpt, based on concept art by Bruce Spaulding Fuller. Featured as an in-joke and homage was also a skull of one of the creatures from Aliens, sculpted by Kevin Hudson. The skulls were crafted in polyfoam and hardened with a resin coating. 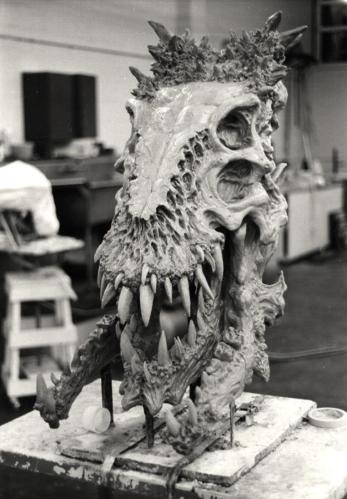 After the final duel taking place in the creature’s spaceship — with Harrigan seemingly killing his opponent — the entire Predator tribe is revealed. For this sequence — the most expensive in the entire film — Stan Winston Studio built nine additional Predator suits; single artists worked on each suit, endowing them with their personal artistic touches and signature traits. Each Predator was distinguished by its texture, colour scheme, armour style and texture, and mask (or lack thereof). The basic sculpture of the Predator enabled it to be moulded multiple times, and each mould to be ‘customized’ in different ways. As such, a wide array of creative liberties and arrangements was allowed on the crew’s part. Specific head and mask designs were individually sculpted and moulded. 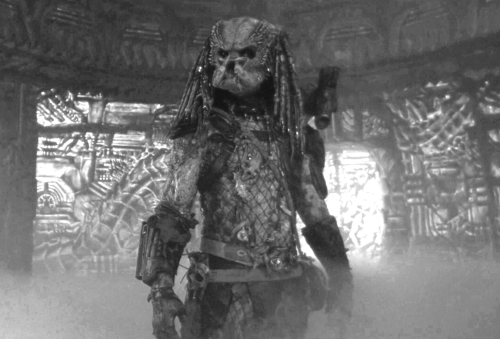 The first member of the tribe to appear is the Elder Predator. Based on storyboards for the film, it was initially considered to have the Elder kill the main Predator by slashing its throat — presumably for its dishonourable conduct. This scene was changed thereafter, with Harrigan seemingly killing the Predator and the other tribe members carrying it away.

The Elder Predator was actually sculpted with the original creature moulds as a base. Its details and textures were modified to give the character a more worn-out, senior look — additional quills, thorns, and plates. The exposed lower mandible gums of the new design are also present. “We changed the structure and the look of it a bit,” said Shane Mahan, “and broke a tusk on it to make it look older. It was fun to go back and do that guy again.” The creature was given a self-targeting shoulder cannon, and the same small sword that had been created for the first film but left unused. The Elder Predator marks Kevin Peter Hall’s last screen appearance as the Predator, as the actor tragically died in 1991 after a contaminated blood transfusion. 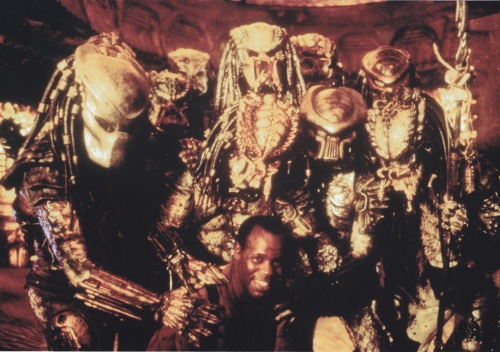 Regarding the other tribe members, previously unused mask designs made their way into the screen, including the original mask prop of the hunter of the first film. The screen-used final mask of the first Predator was also recycled. Other weapons, masks and faces were sculpted and moulded specifically for the project. The clan was played by a team of basketball players. 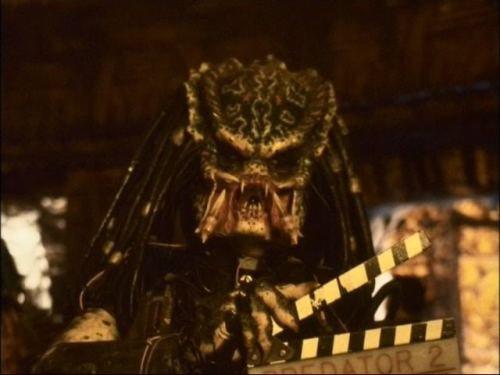 “Every time you do something,” Mahan commented in retrospect, “you come out of it knowing what you would do differently next time, if you got a chance. On Predator 2, we got that chance to improve.” 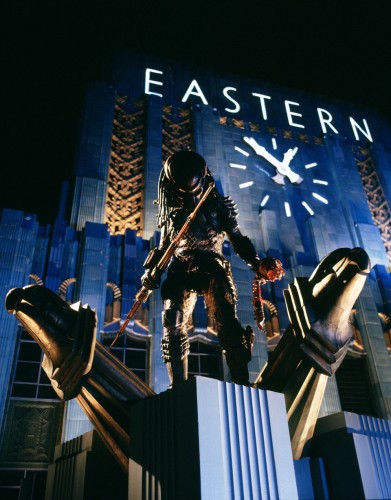 For more pictures of the Predator and its tribe, visit the Monster Gallery.

Previous: Predator
Next: Alien Vs. Predator