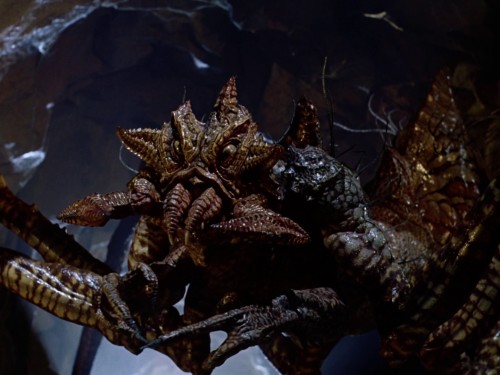 He cried out, staggering back, one hand going to his head, and his first incoherent thought was No wonder Stan committed suicide! Oh God, I wish I had! He saw the same expressions of stunned horror and dawning realization on the faces of the others as the last key turned in the last lock.

Then Beverly was shrieking, clinging to Bill, as It raced down the gossamer curtain of Its webbing, a nightmare Spider from beyond time and space, a Spider from beyond the fevered imaginings of whatever inmates may live in the deepest depths of hell. […] It was perhaps fifteen feet high and as black as a moonless night. Each of Its legs was as thick as a musclebuilder’s thigh. Its eyes were bright malevolent rubies, bulging from sockets filled with some dripping chromium-colored fluid. Its jagged mandibles opened and closed, opened and closed, dripping ribbons of foam.

Budgetary constraints prevented the makers of the It miniseries to fully portray the horror of the climax of Stephen King’s novel. However, they did manage to create their own version of the monstrous spider — the closest physical shape the human mind could relate to It — that the Losers fight at the end of the story. A full-size creature was designed and built by Bart J. Mixon’s special effects team. “My idea for the actual spider is that it wasn’t supposed to be a real spider,” said Mixon. “it’s just the closest thing we can equate to It. So our spider is spider-like, but weird and alien. It’s fleshier and meatier, and has a weird abdomen.” He further elaborated in another interview: “we didn’t want people thinking, ‘Oh, it’s just a big spider!’, so the first thing I wanted to do was make it real fleshy. Basically, spiders just have the exoskeleton, but what if you put meat on top of that? So instead of looking hard, it’s got folds and muscles all over it.” 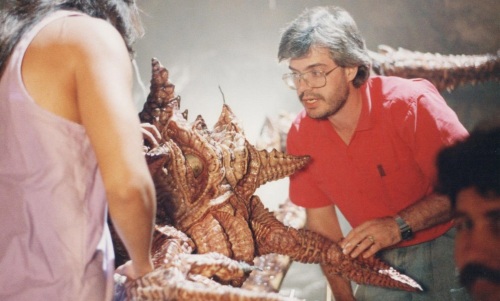 The main artists involved with the monster design were Joey Orosco and Aaron Sims, who also sculpted and painted the final creature. Tommy Lee Wallace, director of the miniseries, recalled: “we labored long and hard designing a spider that was very beefy and muscular, almost reptilian in appearance. It looked great in the drawings, and I even recall a little clay model Bart did, which sealed the deal and won my enthusiastic approval.”

Once the design was approved, the special effects team began construction of a full-size puppet. Allegedly unbeknowst to the director, however, the design was proportionally and aesthetically altered during the translation to full-size sculpture. According to Wallace: “Bart and team went back to Hollywood to work the whole thing up full-size, and shooting started. When the special effects team returned to Vancouver and unpacked the full-size spider, what I expected to see was the big version of that original model — the beefy, reptilian thing that was scary on sight. What they assembled on set was very, very different. Not chunky at all, very lean and mean. That’s a pretty big change to have sprung on you a few hours before you’re supposed to shoot. I don’t mind saying that I was hugely upset, and considered scrapping the whole thing and starting from scratch — but there simply was no more time, and no more money. With advance notice, which absolutely should’ve happened, there might have been some other solution, but in this case, the show simply had to go on.” 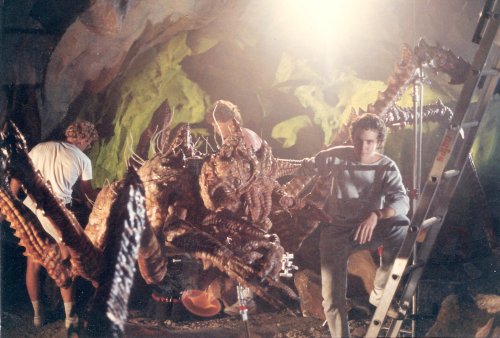 The spider puppet was dubbed ‘the Alaskan King Spider monster’ by the cast of the miniseries. Over 12 feet long and with 15 feet long spiked legs, it featured a fully mechanized head with radio-controlled mechanical components installed by David Kindlon. Inside its body was mouldmaker Brent Baker, puppeteering the creature’s arms — which were devised as a suit extension. The legs were immobile, and the creature could be lowered or raised through an offscreen support. The legs themselves could be detached and used for insert shots. 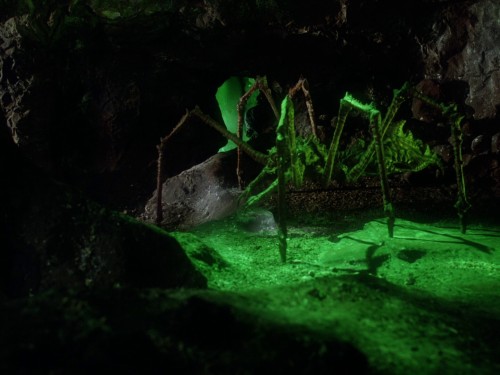 For certain sequences that required complex leg movement, a small-scale stop-motion puppet was devised. It was sculpted and painted by Aaron Sims over an armature constructed by Mike Joyce. The actual animation was performed by Pete Kleinow at Fantasy II Film Effects. The deadlights were both a feature of the full-size puppet and an optical enhancement applied in post-production. 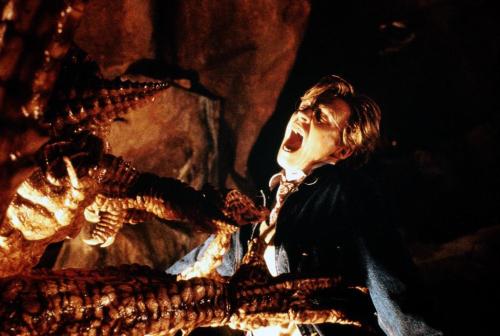 Another problem Wallace met was with colour timing, which ended up showing the creature more clearly than he originally intended. He related: “The close-ups of the monster’s face were never supposed to be seen that clearly. When the show was timed, I was already on to a new gig, and the person who presided over the timing simply got it wrong. In the end, that’s my fault, not his, but it should never have gone out there with the audience being able to see the monster that clearly. That’s a major violation of monster rules, and I have regretted the mistake to this day.”

King famously referred to the final monster in the series as “a big tonka toy spider”; Mixon differs, saying that “for some reason, they shot it in super slow motion, so it’s no wonder it looks like it’s not moving! It was capable of more than what you saw onscreen. All my guys did great work on it, and I think it holds up nicely.” 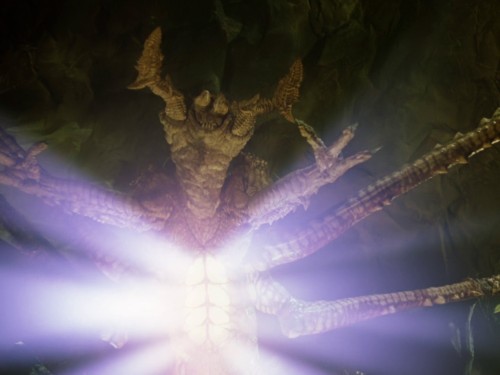 For more pictures of the It spider, visit the Monster Gallery.