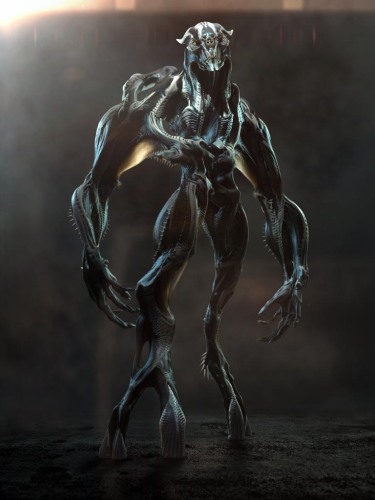 “[J.J. Abrams] wanted something that was iconic,” said creature designer Neville Page, “[that] has never been seen before and absolutely fierce, provocative and scary and new. Whenever you hear new — oh, that one again. How am I gonna do it? So it was intimidating, yeah.” ‘Cooper’ was the nickname given to the Super 8 monster during production — a common technique to avoid news leaks. 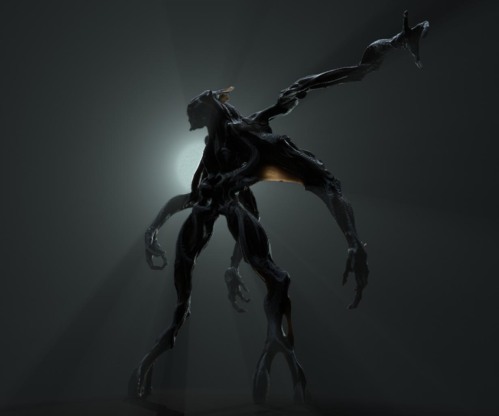 The fundamental idea behind the character is that it is a metaphor for the internal conflict Joe — the main character — undergoes after the loss of his mother. J.J. Abrams explained in an interview with io9: “the monster is a tricky thing from the story [perspective] to make work. The reason it’s in the movie is that it’s a physical manifestation of the struggle going on inside this boy who has lost his mother. The idea of confronting this thing — the inevitability of having to confront this thing really maps the inevitability of having to deal with that loss and figure out a way to get past it. And so having to see and confront this thing that’s the scariest thing in the world, by definition, this creature has to be terrible. Having said that, once you actually confront the thing that’s so scary to you, it’s never exactly as you imagined. And it’s often survivable. Who among us hasn’t wanted to have a certain confrontation, but once it was over, feel so much better that it was done. The cliché of what doesn’t kill you make you stronger is sort of the point. This creature needed to have nuance and not just be something that was a chest-pumping beast. It needed to be scary, but it needed to get to a place where it was not scary – that’s not to say it was ever going to do an 180 and be E.T. and adorable and loveable and cuddly – it was never designed as such.” 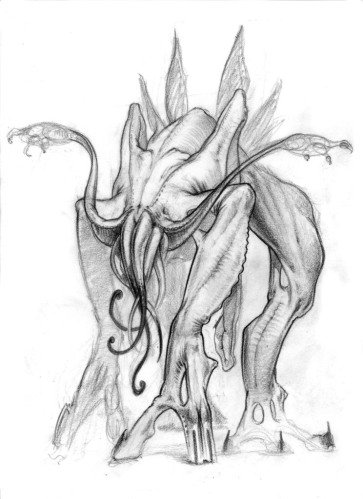 Cooper had to be a believable creature grounded in reality. “The process of developing the monster,” said Guy Riedel, executive producer of Super 8, “it’s sort of the process you’d go through if you were gonna create a new species — because it has to work as a creature, it has to work as a living, breathing animal, kind of the physics of its limbs and the way it walks, the way it moves, and the way it breathes.” Designing Cooper was an uneasy task since the very beginning of the process. “Steven had a very specific visual that he wanted,” claimed Page, “and J.J. had one that he wanted, and I, of course, had one that I wanted, and so it took literally a year worth of time of almost constant design, trying to find the right design for J.J..”

The design process began with the ‘Rorschach’ technique — which involves the generation of abstract, symmetrical black spot images that could “kind of give cues to a potential form language and design.” Once Abrams selected the ‘Rorschach’ silhouette he preferred, the design was elaborated from there. 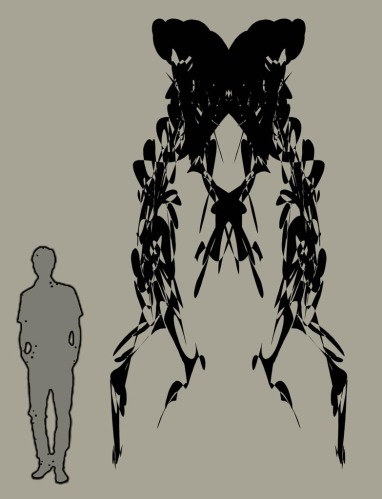 One of the early ‘Rorschach spot’ concepts.

During the brainstorming sessions, Abrams identified certain ‘archetypes’ of cinematic aliens. His intention was not to fully adhere to any of them. He said: “the flexibility the creature had, in terms of what sort of thing it became, was really important, because when you start to look at what’s been done, you realize that A. everything’s been done and then B. there are kind of some specific ‘paradigms’ that you have sort of to adhere to. It’s either gonna be the more spider-like thing, or it’ll be the sort of brute beast, or it’ll be the grey kind of elegant alien. What I loved about [Cooper] is [that] it didn’t easily fall into any one category.” 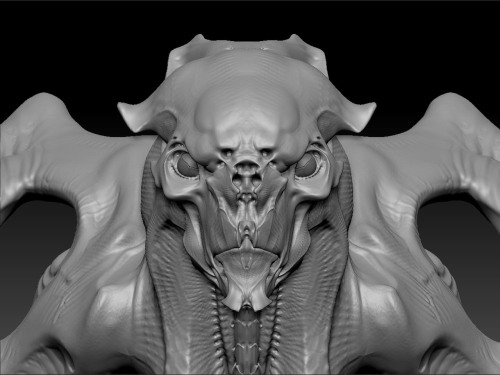 In fact, the director wanted the creature to be mysterious and unidentifiable throughout the film, until the full reveal in the climax. Neville Page designed a configuration that could not be easily determined in the darkness. “The whole idea was that the creature would not be easily revealed [when] watching the movie,” said Kim Libreri, VFX supervisor of Super 8, “until the very, very end. So, there are little details in there that Neville put into the design that are deliberately put in there to confuse the audience. When they catch a glimpse of the creature earlier on in the movie they can’t quite work out what they’re looking at.” J.J. Abrams added: “I was going for, at least, something that felt like there was gonna be a real distinction to it, like how it looked, what its profile was like, what its silhouette was — and I knew that I wanted it to be able to be sort of front and backlit in a way that would be unique.” 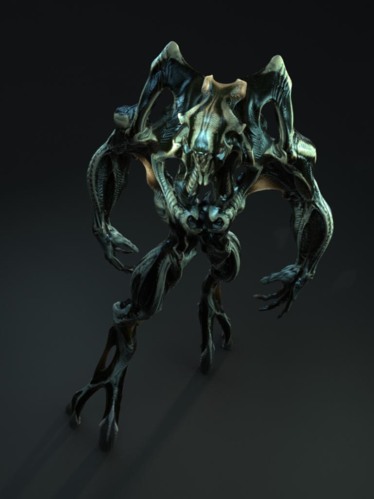 Cooper had to be relatable with and terrifying at the same time, depending on the situation he was involved in. Neville Page added: “When you draw something, you can readily see if it works or doesn’t work. You can look at the proportions and say it looks dumpy and silly, or it looks skinny and frail. In the beginning, I was drawing something was long and attenuated and not powerful enough. What one does is look for that perfect balance in silhouette that sums up the ‘quick read’. In the film, you don’t get a good look at the creature, so you have to have something that will quickly convey this goal. I had many conversations, too, with probably all of the directors I’ve worked with. The default with making a creature scary is teeth being exposed, pinks gums, and furrowed brow. That’s easy to do. That’s primal. You see that and you know you’re scared. I like to do the opposite. I like to design the creature with its mouth closed in a neutral scenario — because it’s easy to make something scary. If you look at a female lion sleeping, that’s not a scary animal, but it’s a cat and it’s furry. When it needs to be, it can be horrific.” Cooper’s mouth is able to unfold to reveal multiple jaws and mandibles — as a way to exemplify this concept. 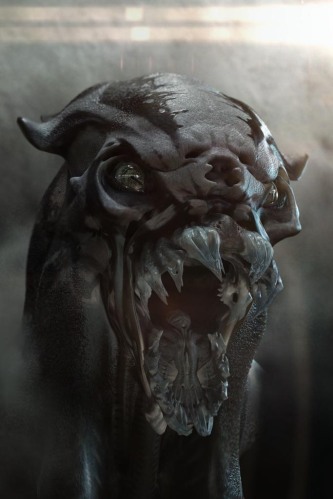 Cooper’s ‘detachable’ sets of arms were conceived by Neville Page. He said: “I thought it would be interesting to have these limbs above, but I just didn’t like them always being there as antennae. I thought, ‘there’s got to be a cooler way to deal with that.’ And it just occurred to me that, ‘wait a minute, there could be two independent shoulder joints’ — and quite frankly, that was rapidly the end result.” The monster’s upper limbs are able to separate into two distinct sets of arms. This unique design aspect allows Cooper to go from an almost humanoid configuration to an opposite, arthropod-like one. Industrial Light & Magic brought the alien creature to the screen via computer-generated imagery; the monster was directly sculpted in zBrush. The visual effects crew initially experimented a bipedal locomotion. It was, however, deemed as “too artificial” and thus scrapped, in favor of the quadrupedal and triad configuration seen in the final film. 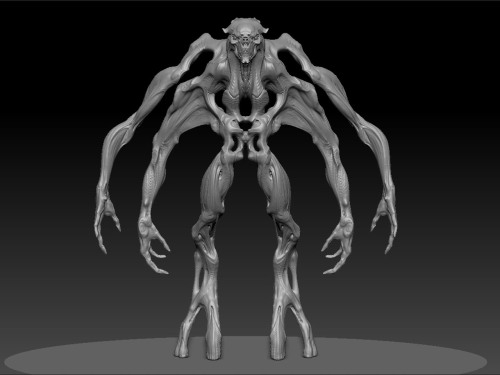 Certain aspects of the design were dictated by specific actions performed by the monster throughout the story. Cooper had to be an intelligent creature with the ability to manipulate objects — and thus, prehensile, thumbed hands were required. At the same time, however, the script called for a monster that could dig an enormous underground cave as its lair. Neville Page solved this issue by moving the burrowing function to the feet. He remarked: “the hardest part to reconcile was the fact that it had to take apart microwaves and V8 engines and lift them and move them around and assemble them and still be able to dig holes. If you look at animals that are burrowing — digging animals — they’ve got long claws. Those claws are not gonna be able to do very delicate, dexterous work. I then transferred that idea down to its feet, thinking that they could be the actual digging device.” 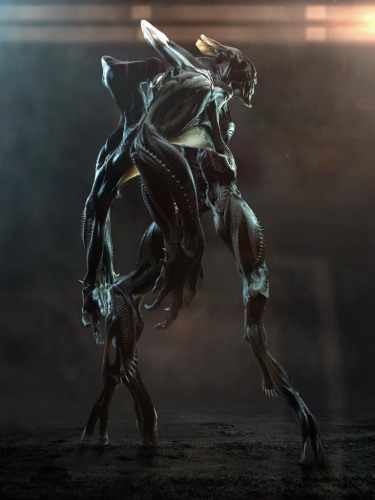 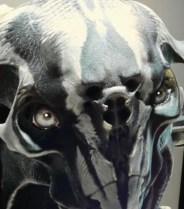 Another key element of Cooper, revealed in the climax of the film when the creature confronts Joe, is that it is not a just a mindless brute, but a character with actual emotions. “The creature in Super 8 needed to be scary and it also needed to have the ability to have a performance and be a little bit less scary too,” said Abrams to MTV News. “We didn’t want a creature that was just running around thumping his chest and screaming. It needed to be something that was able to have a plan, have an experience. Smart enough to create something, build something.” He added: “a lot of what the design was, how do we do both? If there was a big, strong soldier who had been taken in, [who] was a prisoner of war and had escaped, [like] if this guy was Rambo. Basically, this could be someone who for some would be very scary, [he] could be full of rage and also could be emotional and nuanced. So it really was a question of, he wasn’t King Kong and a lot of what we needed to do was find a way to have a design that would give us that latitude to do both — the big scares and also the more subtle stuff.” The reveal happens with a close-up of the creature, which reveals how expressive it is. For this specific sequence, Cooper’s facial movements were generated through motion capture based on performances by Bruce Greenwood.

Payback time. Various scars and wounds were added to the creature, to show the tortures and sufference it had gone through.

Cooper has pearlescent secondary eyelids, which cover the eyes for most of the film — an intentional red herring. The actual eyes — styled after those of Caitriona Balfe, who plays Joe’s mother — were intended as a surprise for the audience. They also further cemented the connection between Joe and Cooper on a thematic level. Neville Page commented on this peculiar design choice: “J.J. wanted you to see the creature throughout the film with these alien eyes, and then at one point it reveals that it has a vulnerability. So, my thought was that it has this Y-shaped slit. Those membranes pull back to reveal the vulnerable, shiny, glassy eyeballs. We ended up changing the eyes to match more [those of Joe’s] mother, so that there is this very subtle connection that the boy starts to read in the eyes of the creature.” 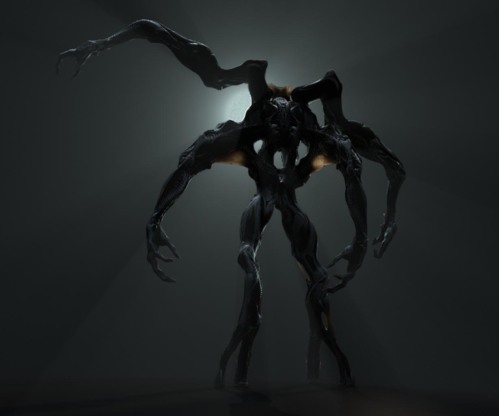 Page’s design received criticism pointing out alleged similarities to the Monster from Cloverfield — another result of a collaboration between Page and Abrams. The latter dismissed such claims, saying that “the only connection between the creature in Super 8 and the creature in Cloverfield is that they were both designed by the same guy, Neville Page. They actually look very different, but they both have two eyes, a nose, and a mouth. So, in that regard, it also looks a lot like Laurence Olivier!” 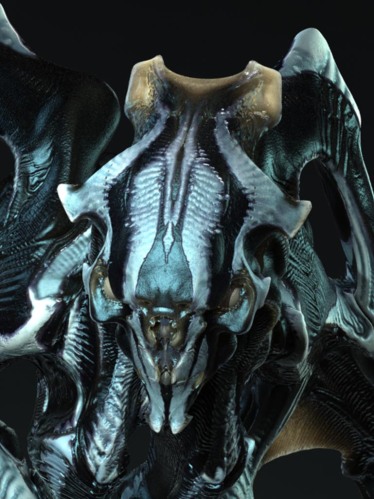 Neville Page commented in retrospect on the results achieved with Cooper: “what makes something iconic and classic is that it is timeless, and people look back at it 20 years from now with the same degree of interest. And dare I say, I think we achieved something pretty unique.”

For more images of Cooper, visit the Monster Gallery.