The Seven Gods of Chaos

In the coldest regions of space, the monstrous entities Ogdru Jahad — the seven gods of chaos — slumber in their crystal prison, waiting to reclaim Earth… and burn the heavens.
Des Vermis Mysteriis, page 87 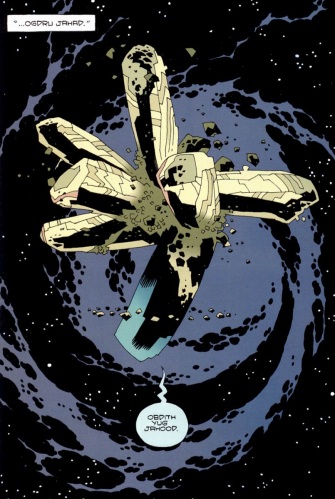 In Mike Mignola’s Hellboy and B.P.R.D. lore, the Ogdru Jahad are the seven gods of chaos, serpentine entities of destruction that wait to be released from their crystal prisons and bring about the end of the world. In the comics up to the time Guillermo Del Toro’s Hellboy entered pre-production, the Ogdru Jahad had only been shown in unclear glimpses, or simulacra representing them. For the film, Del Toro wanted to show the gods in all their horrid visage, and thus the Ogdru Jahad were among the roster of creatures to be designed.

Compared to the other creatures in the project, the design process for the Ogdru Jahad was relatively streamlined. It started from preliminary sketches by Mike Mignola himself. “While I had drawn the Ogdru Jahad several times in the comic,” the artist said, “I’d never shown them clearly — never shown them outside of their crystal/cocoon/prison things. I had no real idea what they would look like.” 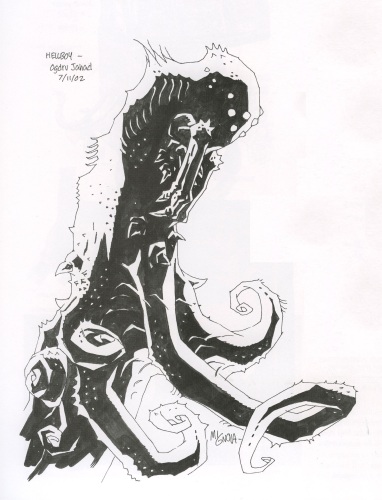 Collaborating with Del Toro, Mignola settled on an aesthetic deviation from the serpentine design, instead highlighting the gods’ lovecraftian origin. Wayne Barlowe related: “they were to be the purest incarnation of the Cthulhu idal, redolent of the Old Ones’ age and otherwordliness.” He produced a single concept design for the Ogdru Jahad, and several illustrations of the gods imprisoned in their crystal prisons. 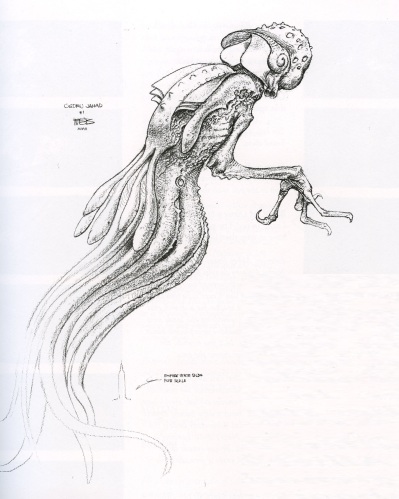 From there, Wayne Barlowe took the design one step further. Playing a sort of game of exquisite corpses dear to the surrealists of old, the artist produced an abstract design with wide Lovecraftian influence. “I did them a day or two before I left. Guillermo wanted me to take a crack at them, and I’m glad he did, because those drawings turned out to be my favourites. They weren’t one of those preconceived notions. I knew what the things were supposed to look like, but I thought, ‘I’m going to do what I used to do as a kid. I’ll start at the top of the page and work my way down!’, all the while keeping that really strange lovecraftian aesthetic in mind. It was almost an improvisional piece; it had more going for it in my head than something ruthlessly calculated in terms of a piece of artwork. There was a freedom in doing it that I really enjoyed.” 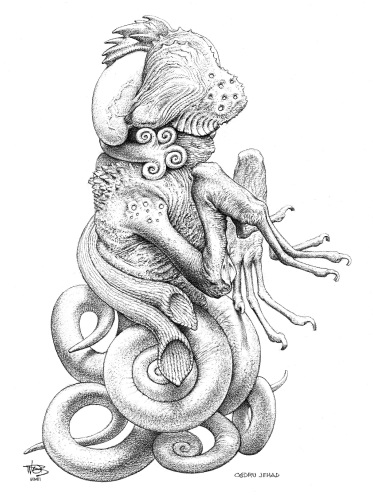 The artist added: “after a few quick studies, I decided to do one very elaborate drawing, and I worked in as many odd, nameless organs and twisting limbs as I could. As it turned out, this wound up being my favourite of all the drawings created during my Hellboy stint.”

From Barlowe’s designs, sculptor Hiroshi Katagiri at Spectral Motion fashioned a small-scale maquette. Initially, the maquette retained the gangly, human-like arms of the concept drawings. Upon seeing it in three dimensions, Del Toro decided to deminish the human element of the design — replacing the arms with two sets of mantis-like appendages. Said maquette was passed over to The Orphanage. 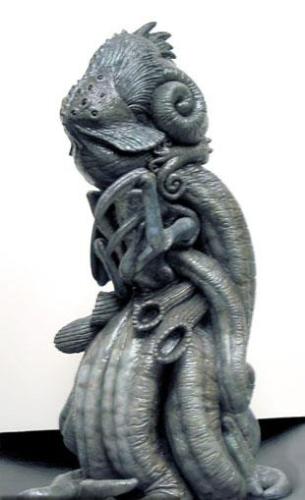 Based on the maquette and concept illustrations, lead modeler Rudy Grossman crafted a digital model, also working out animation and modeling issues in Maya. Those included the development of a unique rigging for the tentacles, which allowed an easy switch between key-frame animation and procedural animation depending on the sequence. “We also needed a lot of controls to make the tentacls move in an organic manner,” said Rothbart. “The fewer points you have, the more jerky it is going to look. But we didn’t want an overwhelming number of points that would bog down the animators.”

“This little moment I wanted to do for the longest time. It was one of the first images — the contrast of a small lamp, which is six feet tall, against a gigantic eye.” -Guillermo Del Toro

The Ogdru Jahad are first seen at the beginning of the film, trapped in their crystal prisons. “The problem was developing a look of the crystal so that you could see it and see what was inside of it,” said Rothbart. “It is difficult to make a shiny, illuminated thing look natural in a black space environment.” He also added: “the Ogdruh Jahad creatures are huge, over 200 meters, and so we had to figure out a speed and style of movement that would suggest that massive scale.” 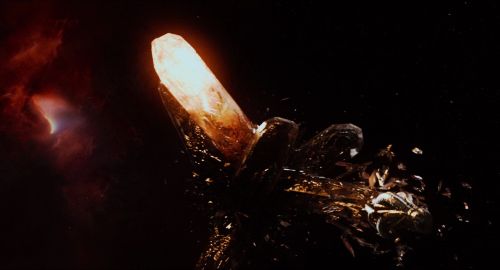 In the climax of the film, Hellboy opens the hell-hole, and the deities are unleashed from their prison. Despite that, Del Toro decided to frame and light them so that they would still appear concealed somehow. “In true lovecraftian fashion,” said Mignola, “we shouldn’t ever see them. What you don’t see is gonna be a lot worse than what you would see.” 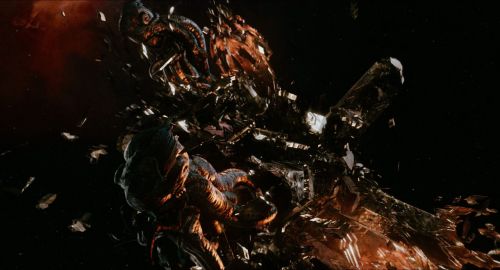 Rothbart added: “mostly, you just see the tentacles of these creatures. You never see all seven of them in the frame, because they are so massive. But you see parts of them, and you see their silhouettes in the far distance.” Again, the animation had to be subtle and deliberately slow to enhance the sense of mass. Rothbart continues: “their motions are very fluid. They had to get from point A to point B but in a slow enough manner that they still felt and looked very large.” Details of the animation also included a swelling throat area and blinking eyes.

When Hellboy reverts the process, the Ogdru Jahad disappear, and he stabs Rasputin with one of his torn-off horns. Rasputin’s master then bursts out of him. The Behemoth is the Hellboy film’s version of Sadu-hem, one of the 369 Ogdru Hem — spawns of the Ogdru Jahad — and one of the main antagonists in Seed of Destruction. While never mentioned by name, the Behemoth plays a fairly similar role to Sadu Hem, and retains an implied connection to the gods of chaos.

Interestingly, Mike Mignola had had a similar idea for the comics, but never got around to using it. “What’s funny in this scene,” he said, “with the thing emerging out of Rasputin… the original notes I had for the first Hellboy miniseries had a scene very much like that; and I have no idea why I ended up not using it.”
Del Toro’s convergent idea of “a dying monk with tentacles coming out of his belly” was, by admission of both the author and the director, a fortunate coincidence. “Putrid minds think alike,” commented Del Toro. 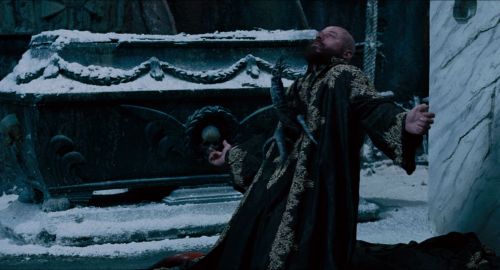 This sequence was initially planned as a practical effect, but when Del Toro deemed it unsatisfying, it was switched over with a digital version devised by Tippett Studio.
The design of the Behemoth itself went through a different array of incarnations before reaching its final appearance. Concept art by Wayne Barlowe, Mike Mignola and Carlos Huante explored different ideas, all revolving around the concept of an asymmetrical, tentacled abomination. Eventually, the final design by Carlos Huante combined elements from cephalopods and eels, with an almost serpentine, tentacled body lined up with black eyes. When Del Toro was shown Huante’s drawing, he said “that’s it.”

Part of the design process also involved the creation of the “Snapper”, the Behemoth’s inner mouth. Its final version was a set of jaws, complete with eyes, everted from a sphincter-like mouth, and in turn everting a three-lobed mouth.

Based on Huante’s concept, Behemoth maquettes were sculpted by Jordu Schell. Its paint scheme and application was done by Steve Wang. When it was passed over to Tippett Studio, the visual effects artists realized they could not just scan it — since it was not sculpted in a neutral state. As such, they had to build the CG model from the ground up, with the exception of the inner mouth — which was scanned from a separate maquette.

Initial animation cycles, such as the movement of the mouth tendrils, were done before principal animation. Those could be applied at any time during the gross animation of a certain sequence. The body vocabulary of the Behemoth was based on squids and octopuses, with a certain degree of improvisation due to certain actions. “Behemoth was hard to get a reference for,” said animation supervisor Todd Labonte, “because he has to do real anthropomorphic actions; like he’s got Hellboy in a tentacle and he’s flipping him up and grabbing him, and you don’t really have any references of octopuses doing that kind of action. So it’s just pretty much up to the animator to try to act it out with his human arm and figure it out.” The Behemoth’s inner jaw worked in sequence, with the Snapper moving in a screw-like fashion.

Sequences featuring the Behemoth were either composited on the real mausoleum set, or fully digital (with a replicated set) when the shot demanded for it. Blair Clark related: “the tricky part was that w had to do a CG background for some of these shots because Guillermo couldn’t get his camera to move as fast as he wanted or in the positions he wanted on the set. There is one shot, for example, in which the Behemoth flings Hellboy up into the air — and so we’re looking down at it as Hellboy comes right up to the lens and then falls back. There was no way we could do that live.” Some shots of the Behemoth fight implemented practical tentacle sections, either cut off and wriggling on the floor or clasping Hellboy in their grip.

Hellboy resolves by triggering the grenade belt, letting himself be swallowed by the beast. The explosions set off one by one within the gullet of the Behemoth, making the CG model expand and ultimately ending up in a large explosion and fluid and particle simulation. In the aftermath, portions of the exploded Behemoth (an exploded carcass and still-moving tentacles) were a combination of digital and practical elements. 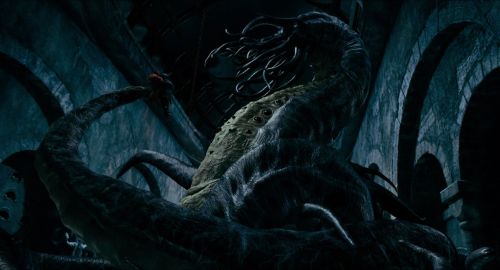 For more pictures of the Ogdru Jahad and the Behemoth, visit the Monster Gallery.

Previous: The Desolate One