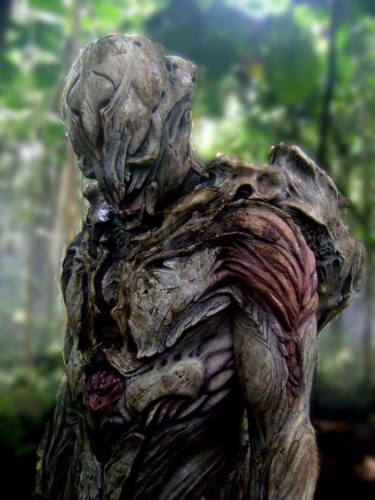 In Predators, the group of stranded characters — lost in the alien jungle — stumbles upon a cage with molt skin and insectoids crawling on it. Later in the film, they discover an agile creature running through the woods — and decide to take it down using Edwin as a bait for it. The creature is killed, but not by the sniper shot — rather, by Noland, a survivor of previous hunting sessions. The corpse of the creature is seen crawling with the same insectoids seen in the cage earlier in the film.

The creature was originally conceived to display the unused Hunter, designed and built for Predator by Boss Film Studios — but ultimately discarded. Eventually, however, it was decided, at one point in production, to make the creature a completely original design. The alien was labeled by the crew as ‘River Ghost’, due to the scripted scene that featured it in one of the early drafts for Predators; in contrast with the final film, the creature is discovered near a river shore — and is so agile to appear to the characters like a ghost, or an apparition.

The creature’s role was shrunk in the final film, compared to earlier drafts: it was originally supposed to play a more substantial part, stalking the characters for a good portion of the film — to the point where they begin to believe it was responsible for taking them to the alien reserve; not in case, the creature is also known as ‘red herring’. Another label was ‘Ram Runner’, due to how the performer in the suit ran on set.

As per the other practical creature effects of the film, the River Ghost was brought to life by Greg Nicotero’s KNB Efx. Due to a short production schedule, concept artist John Wheaton could only complete two concept designs (seen above): the scenes with the River Ghost were the first special effects sequences to be shot during production. The first design imperative for the River Ghost was that it had to be as distant from the Predator design as possible — so that the audience would not confuse the two in any way. Generally, Wheaton wanted the creature to be tall and insectoid, with an external, segmented carapace on its surface. Two other Monster designs also served as an inspiration: the erosive Guvyer from the Guvyer films and the Metaluna Mutant from This Island Earth. “I loved the exoskeleton look,” Nicotero told AvPGalaxy, “and the bone protrusions on the shoulder so we mimicked that along with some Metaluna Mutant colour schemes.” Due to its influences, the creature was also sometimes referred to as the Guvyer alien.

The head. Notice the lack of eyes, and the sensory organ housed in the forehead.

Due to time issues, the design process went directly from concept art to final, full-sized suit sculpture. The River Ghost was sculpted by Mike O’Brien, Garrett Immel and Gino Crognale, and took over 10 days to complete. Many different textures were detailed onto the sculpture — which O’Brien wanted to appear as “very organic in appearance.” The team used crustacean carapaces, as well as rocks, portions of bark and animal bones as reference for the texture on the creature’s surface. The schedule was not detailed, and O’Brien put a lot of effort into detailing the suit, making it “ready for anything.”

Much of the final design was actually established during the full-size sculpture stage. The final head design features no eyes — and displays sculptural suggestions of cheekbones and eyeholes. The forehead houses an unspecified sensory organ, protected by a movable bone. It is unclear what actual purpose it serves. Due to the fact the sculpture was based on a life cast of the performer (Carey Jones, who also played the ‘Tracker’ Predator in the film, and was recommended by Nicotero) the proportions were also altered: the creature’s limbs and body were made thicker and more muscular, as opposed to the thin, insectoid anatomy of the concept designs. In particular, the arms and finger joints were shortened of about half their original length.

The final arms feature elongated, bony, clawed fingers. Nicotero’s intention was for the creature to hold its hands against its chest, making the fingers appear as false ribs. When the creature is about to attack, it unfolds and stretches its arms — in a somehow alien manner, something not quite shown in the film — to strike at its prey. The long, “vicious” claws would be revealed “almost like switch blades,” Wheaton said.

Moulded in foam latex, the creature was finally painted by Casey Love. Again, due to time and budget reasons, only one hero suit was built, along with a stunt head (whose mouth was moved by the performer) and fully mechanical hands, as well as stunt hands. The creature’s plantigrade legs were replaced in post-production with more insectoid, digitigrade legs with a particularly elongated metatarsal section. A digital model was sculpted in zBrush by Magdalena Dadela.

About half an hour was needed for Jones to fit inside the suit. At the same time thicker and tighter on the performer compared to the ‘Tracker’ Predator, it proved to be a more challenging performance for Jones. The hands, due to the finger extensions, were complex to maneuver — and the mask design fundamentally made Jones perform completely blind. Whilst acting inside the suit, he kept the mindset of a creature hijacked from its own world and taken to an environment completely unrecognizable to it; the River Ghost had to move like a savage beast — when chasing Edwin, Jones acted like there was no obstacle between the creature and its target — its only objective was to capture him. To its dismay, it never did.

For more images of the River Ghost, visit the Monster Gallery.