Special: Why was the Pilot fired from ‘The Thing’? 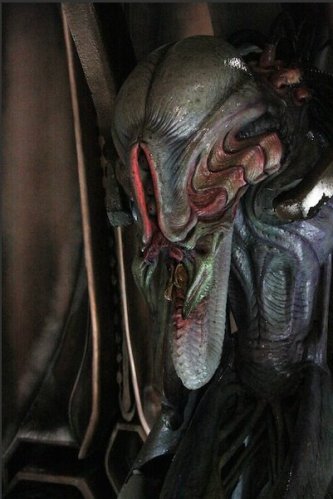 As Kate Lloyd enters the ancient spaceship — in the climax of Matthijs van Heijningen’s The Thing — she discovers a luminous, shapeshifting tower. Hologram pieces continuously assemble and disassemble, moving geometrically. It is here that she is attacked by the assimilated Sander, who has taken the form of a distorted creature. The final cut of the film indeed was a distortion of the director’s original idea surrounding what was hidden in the ancient spacecraft.

Amalgamated Dynamics was tasked with designing and constructing all of the Thing’s gruesome transformations, as well as additional alien creatures. Several full-sized models were built, ranging from rod puppets to suits. Due to a studio interference, it was decided late in production to replace most of the practical work with digitally-rendered effects, as the film “felt too 80s.” An exception is represented by a creature, labeled by the filmmakers as ‘the Pilot’. 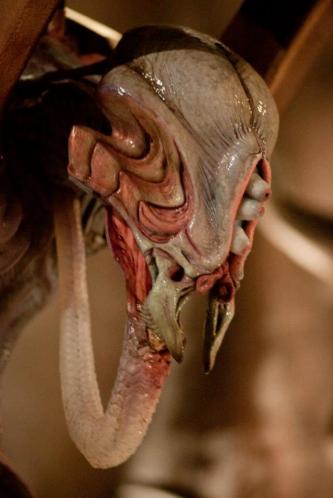 In the final film, said Pilot was replaced by the hologram tower (labeled as “the Tetris version” by the film’s own director). As a result, the Thing manifests itself in the form of a mutated Sander; the Sander-Thing was designed in a fairly quick time period, brought on the screen directly as a digital effect. “We created the Sander-Thing the last minute,” the director said, “and it shows, unfortunately.” The replacement was established after test screenings, and as such the Pilot-Thing can be still briefly seen in the film — hidden by the shadows and camouflaged among the machinery. This is in all probability unintentional, and the question comes up:

Why was the Pilot Creature fired from The Thing?

The only known screenshot of the original climax sequence featuring the Pilot.

Monster Legacy asked to the directly involved — Alec Gillis, co-founder of Amalgamated Dynamics, who was kind enough to answer my question. The special effects veteran explained:

“The Pilot was the Thing perfectly replicating the species of aliens that built the saucer. It was replaced after a screening that apparently confused viewers as to what the Pilot was. It was felt that, since the audience had only been shown iterations of the Thing that were asymmetrical, split open and grisly, to present a creature that looked like it evolved through normal biology was a violation of what had been seen in the 2011 film as well as the John Carpenter film. It was then decided that the Thing in the climax needed to be more ‘Thing-like’. We designed the Sander-Thing as a maquette that was scanned and animated.”

The original backstory — which the director developed for the film — conceived the Pilot as part of a space-faring alien race. A scientific crew of members of this species collected lifeforms from different planets, storing them inside research pods. Unwittingly, the scientists took the Thing — disguised as another lifeform — onboard. The entity proceeded to break free and wreak havoc in the spaceship, assimilating both the alien researchers and the specimens they had collected. The last remaining crewmember, the Pilot made the ship crash on purpose, with the intention of killing the Thing. The creature survives, erupts from the landed craft and escapes — only to stop a few hundreds of meters away and freeze. 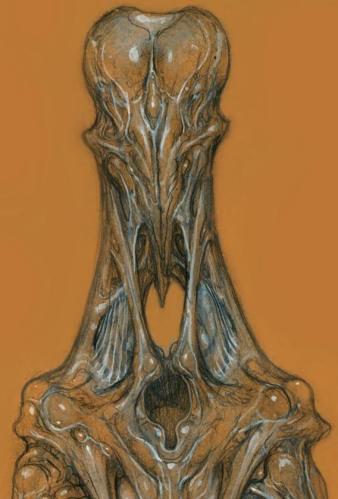 Concept art of the Pilot, by Paul Komoda.

As Kate enters the spacecraft, she sees the mummified remains of the Pilot, and is ambushed by the Thing, which has taken on the form of the Pilot race. This is because the spaceship is controlled through a neural interface that employs biomechanical technology: the Pilot connects with the ship through a series of ‘umbilical cords’ attaching to ports on its back. Those were called “bio-ports” (reminiscent of a Surinam toad, according to concept artist and sculptor Paul Komoda). Having imitated the Pilot’s form, the Thing is thus able to restart the spaceship for its own, obscure and perhaps incomprehensible motives. When it attacks Kate, the cables detach from the monster’s back. Various possibilities were explored in concept art and sculptures, including the Thing’s signature tendrils rupturing out of the Pilot imitation’s chest.

Kate finds the Pilot-Thing in Rob McCallum’s storyboards for the original finale of the film.

An assimilated Carter reaches the inside of the ship, where Kate is threatening the Thing with her last grenade (paralleling MacReady in Carpenter’s film). The most convenient move for the Cater-Thing is to set the Pilot-Thing on fire, in order to gain Kate’s trust in what would otherwise have been a lose-lose situation. Van Heijningen commented, saying that “Carter runs in and sees what she [Kate] is doing, and blows up the Sander-Thing, just to convince Kate that he is human: he basically has no choice, because had he fried Kate with his flamethrower, everybody would’ve blown up.” 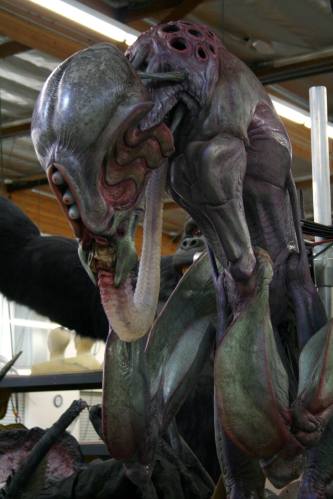 The Pilot in ADI’s workshop.

Bringing the Pilot to life was “a great opportunity to design and build a unique alien life form,” according to Alec Gillis. A team of artists were involved in the creation of the Pilot design. Early concepts by Paul Komoda and Michael Broom included a bulbous skull based on a chihuahua’s, which would make all the way through to the final iteration. The finished creature design was penned by Jordu Schell, with a head design by Farzad Varahramyan. A conceptual imperative was that it should not be visually reminiscent of the Thing. “We wanted to be sure it looked like its own, stand-alone lifeform,” Tom Woodruff Jr. said in our conjoined interview, “and not something that was already infected by the Thing – that was a crucial story point. So to that end, it was designed with a very biological symmetry, very specific eyes, and hands and feet that looked like they were nimble and with enough dexterity to pilot the ship.”

Concept art of the walking Pilot.

No specific earthly creatures inspired the Pilot, a grotesque combination of otherworldly traits: three eyes, disposed vertically, sprout from a single socket in the center of its bulbous head, and blink with circular, constricting eyelids. The legs feature thin and elongated toes — and seem to be merged at the end of the feet. Concept art of the walking Pilot was produced with variants on how it precisely disposed its fingers and toes during locomotion. In said concept art and in McCallum’s storyboards the legs are split apart — either an ability intrinsic of the Pilot race or a mutation of the Thing. 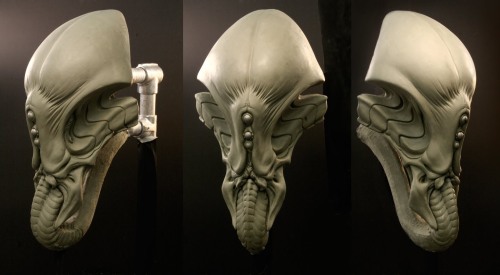 Various views of the Pilot’s head.

Several small-scale maquettes were sculpted by Clint Zoccoli and Paul Komoda to establish the final appearance of the creature. From those, a full-sized Pilot was sculpted by Mikey Rotella, Clint Zoccoli, Miyo Nakamura, and Casey Love (who was also responsible for applying the colour scheme). For the majority of the scene, the Pilot would be a rod puppet with animatronic functions in the head. Once the creature detaches from the control systems, a digital counterpart was to be used. For the scene where it is set on fire, Tom Woodruff Jr. wore a special ‘fireproof’ suit — with arm extensions — to shoot reference footage of its fiery demise; the scene would later be finalized with the addition of the digital Pilot-Thing being burned.

To portray the ship’s real Pilot, seen mummified in its former control post, Amalgamated Dynamics built a weathered version of the creature. Surface detailing and a decayed colour scheme by Yuri Everson provided the effect of the mummified skin. The model was then connected with cables going upwards in the spaceship interior set. The ‘breathing tube’ that connects the Pilot’s lower jaw to its chest is severed, suggesting how it actually killed itself (“basically Colin in space,” the director said). This is the element that was replaced with the ‘Tetris Tower’. Another mummified Pilot was built for a scene where Kate stumbles upon another corpse before entering the control bridge. 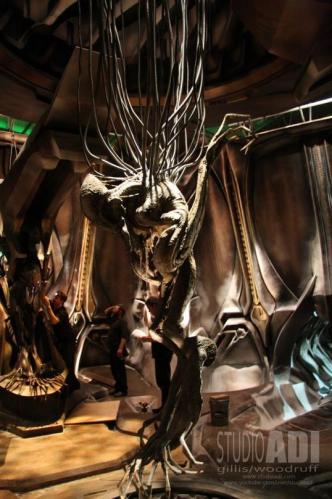 Von Heininjen commented on the sequence: “what had to be done was showing the slaughterfest, while Kate was going through the ship — seeing multiple Pilot aliens dead, half transformed, burned. Something terrible had happened in the ship. I liked that idea because it would have been like the Norwegian camp in space. Kate sees the pod room and one broken pod, which gives her the clues of what happened. What didn’t work was that she wanted to find Sander and stop the ship from taking off, and still solve the mystery in the ship. These two energies were in conflict.”

The Pilot was not the only character deleted from the final cut of The Thing. To portray some specimens contained in the “research pods” of the Pilot race, ADI built six dummies of the creatures by “kit-bashing” previous moulds. Recycled moulds included portions of creatures from the Tremors films, Starship Troopers, Alien: Resurrection, and Dragonball: Evolution. Originally, Kate stumbled upon the “pod room”, before she actually entered the bridge. The scene was replaced with her examining the ship structures powering up. 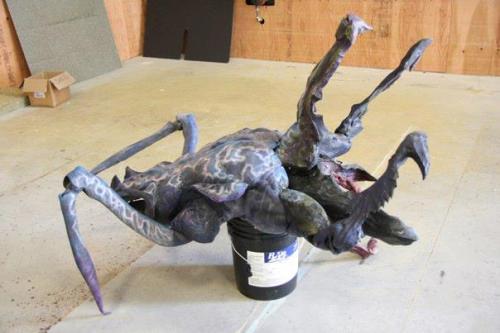 One of the pod alien specimens; notice the ‘recycled’ Graboid mandibles, as well as the Arachnid limbs.

Alec Gillis explained to The Thing Prequel Facebook page: “We did create six or so ‘pod creatures’. These were weird silhouettes meant to show a variety of aliens that had been collected throughout the universe. They were in frozen pods, one of which had burst open from the inside. There was a hallway one of the characters walks through, where a mummified Pilot alien was collapsed on the ground, supposedly killed by the Thing.” Even before the Pilot itself was removed from the film, the Pod Creatures received the same fate. Van Heijningen added: “We needed a lot of money to show the [Norwegian camp] version in space, with all the dead aliens. The studio thought it was too expensive and too complicated, so we erased that whole backstory.” 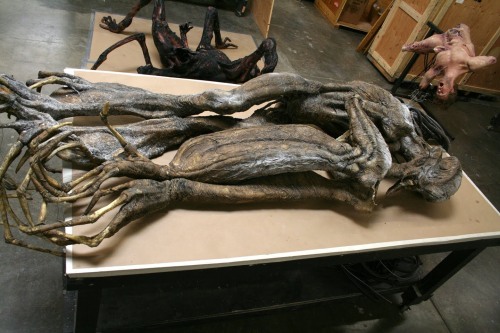 An alternative cut of the film featuring the Pilot is unlikely to be seen: the footage shot with it was unfinished, and a digital counterpart of the Pilot was to be inserted after the creature detaches itself from the cockpit; the cost of finalizing such footage is elevated. The Pilot and the pod alien specimens can only represent the remnants of what could have been portrayed in The Thing, before Studio executives, as often happens in Hollywood, tampered with the creative vision of the director. Although ‘fired’ from the film, the Pilot received brief days of glory at the 2012 Monsterpalooza convention, and currently resides in Amalgamated Dynamics’ display room, along with the special effects company’s most popular creations.

For more pictures of the Pilot and the lost Pod Aliens, visit the Monster Gallery.