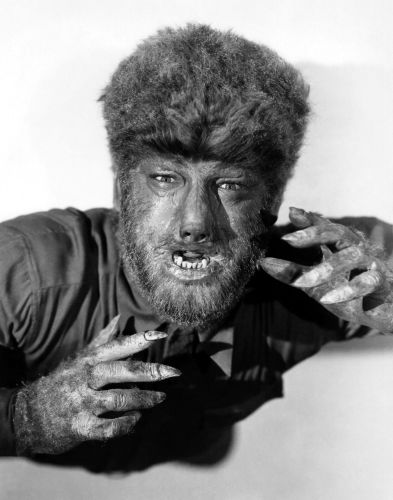 Even a man who is pure in heart, and says his prayers by night;
may become a wolf when the wolfbane blooms and the autumn moon is bright. 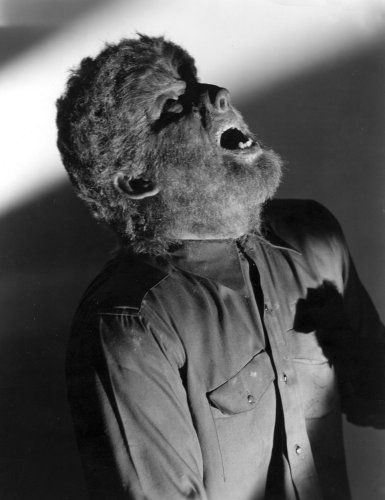 In the early 30s, Universal was developing a Werewolf film. Aptly titled The Werewolf, the story harkened back to traditional French stories of the loup garou (wolf man). Actor Boris Karloff was pre-cast as the titular character, and make-up artist Jack Pierce designed an extensive Werewolf make-up specifically to fit the actor’s bulky physical traits. In 1935, the project underwent several changes and was retitled as Werewolf of London — which would go on to become Universal’s first Werewolf-themed film. The role originally assigned to Karloff was turned over to Henry Hull — a change that forced Pierce to devise a ‘scaled down’ version of the appliances: not only he needed to fit Hull’s thinner physique, but — as the actor himself argued — the other characters in the film would have to recognize Dr. Glendon even in Werewolf form.

In retrospect, Pierce found this initial effort disappointing; however, at the dawn of the following decade, he was able to resurrect his original concept for Universal’s new Werewolf project — The Wolf Man. With Karloff occupied in other kinds of roles, the part of the Wolf Man was assigned to Lon Chaney Jr. — whose bulky physical features, similar to Karloff’s, allowed Pierce to bring to life his original vision. As envisioned by the artist, the Wolf Man was a hybrid creature leaning more towards the human side of the spectrum, allowing Pierce and special effects supervisor John P. Fulton to use less extensive appliances; in addition, Chaney would be able to deliver his performance without excessive hindrances. As the Wolf Man would be fully-clothed throughout all of his appearances, the make-up simply consisted in make-up for the face and hands, a chest appliance to enlarge the actor’s chest, and foot extensions to portray wolf-like digitigrade legs.

Despite the differences in design, the make-up application process was not very different from the one Pierce devised for Werewolf of London. With the exception of the Wolf Man’s nose, the nails and the foot extensions (boots covered with yak hair and manually-sculpted feet), Pierce’s make-up involved no moulds or pre-made appliances: every make-up application started from scratch, with yak hairs carefully laid out in order. “I put all of the hair in a little row at a time,” Pierce said. “After the hair is on, you curl it, then singe it, burn it, to [make it] look like an animal’s that’s been out in the woods. It had to be done every morning.” Every make-up application session lasted up to two and a half hours. This, combined with the intricate make-up design led to an uneasy and controversial relationship between Chaney and Pierce and an overall unpleasant experience for Chaney.

Working in tandem with Pierce, Fulton realized the film’s transformation sequences: in the first, only Larry Talbot’s feet are seen transforming into the bestial Werewolf feet; and in the finale, the dead Talbot reverts back to human form. For these key scenes, Fulton used the same technique — this time perfected — he had used for Werewolf of London: progressive stages of the make-up (always applied by Pierce, with increasing hair number and density) were photographed in identical conditions and lap-dissolved in the final film to create the illusion of a progressive transformation.

Chaney recalled the experience: “the day we did the transformations I came in at two AM. When I hit that position they would take little nails and drive them through the skin at the edge of my fingers, on both hands, so that I wouldn’t move them anymore. While I was in this position they would build a plaster cast of the back of my head. Then they would take drapes from behind me and starch them, and while they were drying them, they would take the camera and weigh it down with one ton, so that it wouldn’t quiver when people walked. They had targets for my eyes up there. Then, while I’m still in this position, they would shoot five or ten frames of film in the camera. They’d take that film out and send it to the lab. While it was there the make-up man [Pierce] would come and take the whole thing off my face, and put on a new one, only less. I’m still immobile. When the film came back from the lab they’d check me. They’d say, ‘your eye have moved a little bit, move them to the right… now your shoulder is up…’ Then they’d roll it again and shoot another 10 frames.” Despite Chaney’s varying, oftentimes exaggerated accounts, the entire process realistically took roughly 10 hours.

For more pictures of the Wolf Man, visit the Monster Gallery.