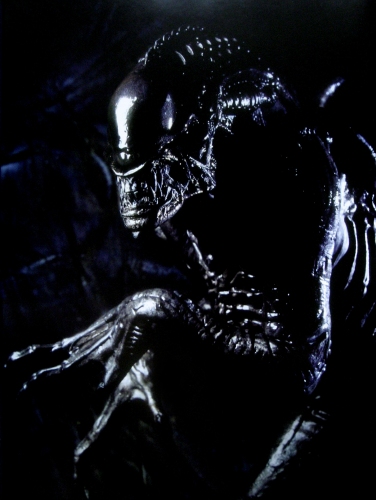 With the worldwide success of Alien Vs. Predator, a sequel was greenlit by Twentieth Century Fox. Due to their familiarity with both the Alien series and the first AvP film, the special effects artists of Amalgamated Dynamics were again hired to bring the creature effects of the new film to the screen. Accompanying them in the task was Hydraulx — directors Greg and Colin Strause’s own visual effects company, which provided digital counterparts for all the Alien creatures. Requiem would feature the least stages of the Alien lifecycle — with a script devoid of both Eggs or a Queen; despite that, it would introduce to the screen the so-called ‘Predalien’, an Alien born from a Predator host, which only had been portrayed in the AvP comics up until the film’s release.

Reappearing in the film was the Alien hive, this time more overtly influenced by reference photographs of the sets built for Aliens. The hive was carved from styrofoam and coated with elastomeric sealant. 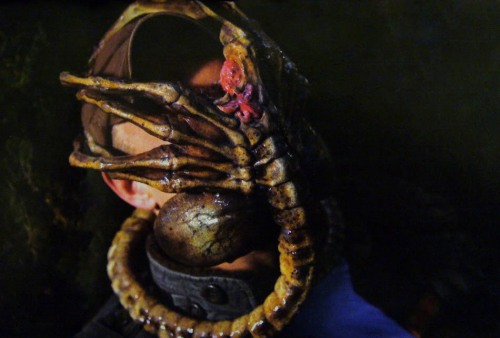 The Facehuggers were again built starting from moulds that had been created for Alien: Resurrection. The creatures were given a new paint scheme, based on brown and red hues. The Facehuggers were built as a series of models, including hand puppets, stunt dummies (maneuverable with wires), and an animatronic Facehugger able to run by itself with a rhythmical motion of its limbs. The battery-powered puppet, in order to actually move, had to be supported with a wire — being unable to sustain its own weight by itself — which was also used to determine the Facehugger’s path in the scene. Another Facehugger was radio-controlled and fully articulated. Reverse photography was used for certain sequences of the creatures leaping onto victims’ faces. Digital Facehuggers were implemented for more complex actions, such as those where the creatures escaped from the Predator ship.

The Chestburster, like the Facehugger, was again a recycled mould from Alien: Resurrection. To portray the film’s first chestbursting sequences, “a rubber skin casting of the creature was quickly inflated while high-pressure blood lines were fired, rupturing a tear-away shirt and providing a bloody reveal,” Gillis said in AvPR: Inside the Monster Shop. “Next, an articulated puppet was attached to the actor’s under-clothing harness to writhe and snap its jaws, while blood tubes again provided a wet and horrific environment.” Animatronic versions were also used in combination with fake pregnant bellies in the ‘belly-burster’ sequence.

The Alien Warrior design began from the Alien moulds from Alien: Resurrection, including the renewed, ‘bulkier’ hands devised for AvP. The directors, however, wanted to make new changes to the creatures for their film. Based on the Aliens’ appearance in Aliens, the Strause Brothers wanted the heads of the creatures to be domeless and ridged. “Having been such fans of Aliens,” Gillis said, “the Strause brothers were very partial to that particular iteration of the Alien Warrior head and the absence of a translucent dome. The new head sculpture was assigned to Tully Summers, who began by inspecting a casting of the head from Aliens. The goal was to capture the essence of that sub-surface structure, but with greater detail than what Woodruff had created 20 years ago in sculpting the original head while working for Stan Winston.”

In addition, the directors felt that the ridged head, as opposed to the domed head, would aid the Aliens’ ability to camouflage within the environment. “Part of the idea behind [the design] is that the Aliens try to conceal themselves in the spaceship,” Colin Strause said. “Their long, smooth surfaces blend in, like in Aliens. The rigid head helps them camouflage into their environment.” The head was also otherwise redesigned, with a different teeth disposition and proportionally bigger upper canines, as well as newly sculpted lips and thinner jaw tendons.

The Alien’s neck was also resculpted and refined with more intricate biomechanical texture. “The neck must not only conceal the performer’s head and provide vision and breathing accommodations,” Gillis said, “it must more importantly compliment and complete the design of the Alien. Sculptor Mike O’Brien tackled the redesign, relying on castings of the neck of the Queen Alien from AvP as a source of reference. O’Brien was able to capture the strong design lines and preserve a balanced sense of the revered bio-mechanical hallmark of the Alien while still making possible actors’ vision and breathing from within.”

The Aliens were built as a series of stunt and hero suits, with Woodruff returning as the main creature performer — supported by stunt performers in scenes that featured multiple Aliens. Both hero animatronic heads and stunt heads could be fitted onto the suits. The hero heads were self-contained, radio-controlled units; each head could be singlehandedly controlled by one puppeteer, who could maneuver all of its functions from a distance. Both floppy tails, maneuverable with wires, and stiff, self-supporting tails could be attached to the suits depending on the demands of the specific shots. Also built were dummies portraying the dead Aliens, dummies that were to be damaged by Predator or human weapons, and Alien skulls for the trophy room sequence.

For more images of the Aliens, visit the Monster Gallery.

Posted on 22/08/2015, in Movie Monsters and tagged Alien, Aliens Vs. Predator: Requiem, Amalgamated Dynamics. Bookmark the permalink. Leave a comment.