← Monster Gallery: An American Werewolf in London (1981)
Monsters in Chinatown →

John Carpenter Live – I was there! 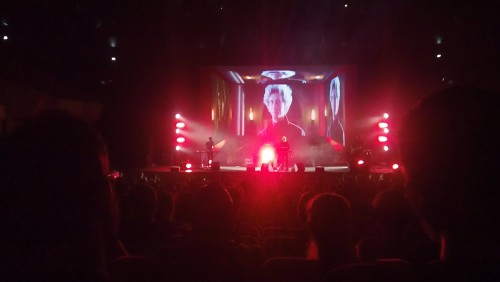 One of my photos from the concert – poor quality is due to having only a humble cell phone!

And I was there and I saw it all. Stalls Area, Row 18, 3rd seat. Sometimes these events do reach my country after all!

I have been an enthusiast of Carpenter’s film work for years. He was and is capillarily influential on the horror genre and not only that — a true gift to cinema as an art form. Even when some of his films have structural flaws or scripts that fall flat, he always bestows them with a tremendous sense of imagery as well as a dense, brooding atmosphere — all characteristics that are absolutely unrivalled in the field. Carpenter is also known for composing the music of his films, music that much like the films themselves has become a part of film history. Halloween, Christine, Big Trouble in Little China, Escape from New York and so many more. All of the maestro’s films have a distinct sound to them and the fact that he himself composes their scores adds to how he excels at presenting his creative vision to the screen.

Carpenter enters, and the audience roars in an impetuous demonstration of wholehearted enthusiasm. The concert explodes into action with the iconic theme from Escape from New York, the dystopian thriller film starring Kurt Russell in one of his most well-known roles — the antihero Snake Plissken. Much like with all that follows, behind Carpenter and his crew footage of the film, edited masterfully to fit with the music, is played on a false-perspective cube-o-vision-esque screen. A brilliant addition to the show — one that helps remembering with a sense of tearful and emotional nostalgia these incredible films and the impact they have had on us all.

Directly after that the band plays the theme from Assault from Precinct 13, one of Carpenter’s earliest films and in fact his second motion picture after Dark Star (which was not featured in the concert). Again, footage flashes before the audience’s eyes — of men scuttling in the dark like ominous creatures, a kind of image that would find its way in several more Carpenter films.

Of course promoting his new album Lost Themes II, Carpenter next proposes two original pieces: Vortex and Mystery, two tracks taken from the first Lost Themes album. Dense with his characteristic synthesizer style, the tracks drip with appropriate mood, but can only pave the way for the next film themes.

“Over the years I have directed many horror films,” Carpenter says, announcing the next track. “Monster movies, slasher tales… ghost stories.” The Fog‘s theme is then played, and during this incredible performance, a nice moody touch is the fog coming on the stage as the band plays. A terrific effect which contributed to the atmosphere and helped evoking the vibe of the film. For a moment, it seems that the hall might as well be invaded by the ghostly Blake and his murderous, hook-handed and red-eyed crew. 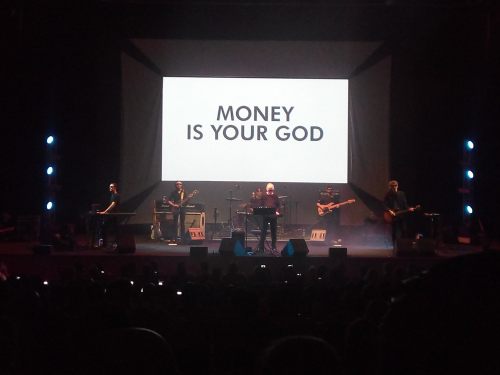 Title cards flash before the audience: “Money is your God”; “Submit”; “Consume”; everyone knows it — it is time for the theme from They Live. For this one performance, Carpenter amusingly puts on the memorable sunglasses that allow the antihero of the film to discover the real world underneath the mundane routine he is used to. Footage of his encounters with the corrupt-faced aliens and the street fight with Keith David are shown.

One of the most memorable moments in the show was Carpenter announcing the theme for The Thing – he mentions Ennio Morricone, with whom he composed the score, and praises him highly — saying that Morricone is “the greatest composer in the history of cinema.” The theme then starts playing — the ominous, repetitive and heartbeat-esque music that perfectly underlines the brooding mood and paranoia in the iconic, timeless Monster Movie.

After another track from Lost Themes, titled Distant Dream, Carpenter briefly announces the next piece: “Kurt Russell and I – we’ve done five movies together, but the most fun we’ve had, I think, was when we were looking for a girl with green eyes.” The band then plays the lively, energetic theme from Big Trouble in Little China, one of Carpenter’s most creatively unique, grotesque and funny films. Fists rise in the air. The audience ravens with delight at the music — the quintessential film theme of the 80s.

Two more songs from Lost Themes — Wraith and Night — serve as a moody prelude. “Horror movies will last… forever!” Carpenter declares, and the Halloween theme starts playing, infused with a tremendous and previously unheard power. As with all the other performances, the unique structure of the Santa Cecilia hall contributes to the incredible quality of the music effects.

Do you read Sutter Cane? A memorable line for those that have seen that film, and one that was unfortunately missed in the show. Without much of an introduction, Carpenter follows immediately with the dynamic and rocking theme from In the Mouth of Madness — my favourite film of his, although one of the lesser known ones. The live performance paid respect to the original composition, and was welcomed with pumping fists and signs of the horns of an audience that by now is completely immersed in this unforgettable experience. Somebody in there must have been sitting with a copy of The Hobb’s End Horror.

A brief pause; Carpenter and the band exit the stage, only to rapidly come back and play the end theme from Prince of Darkness — Carpenter’s second film in his Apocalypse Trilogy (with the others being, respectively, The Thing and In the Mouth of Madness). Two more original tracks follow – Virtual Survivor and Purgatory.

Carpenter thanks the audience for the wonderful night, and then invites everyone to drive home safe — “for Christine might be lurking somewhere!” Red hues tinge the screen — and then headlights flash. The final piece played for the concert, in what was by far my favourite performance out of them all, was the theme from John Carpenter’s Christine. As footage from the film plays, with the demonic car murdering its victims one by one, the director and the band play the score with unparalleled emotion and energy. The theater bursts with the notes of the song in this explosive and unforgettable finale to the concert. One hour and a half has passed, and it has gone by too fast. The final song is still stuck in my head and I get a little tear as I am writing about it. I wish I could relive those moments again and again like the first time.

John Carpenter was born January the 16th, 1948. As of 2016, he is 68 years old; and yet, he is on tour worldwide (with the last date being October the 31st in London), celebrating and remembering the stupendous art he has created, more than four decades after the dawn of his filmmaking career. There is something so emotional and absolutely great in that, and it should be an example to us all — living life at its fullest even in his elder years, always true to his own soul no matter how much time has passed.

Even though I was not actually able to meet Carpenter in person as I had so much hoped to, I am infinitely grateful for being able to attend this concert — which I can safely say was one of the most incredible and downright best experiences in my life, one that I will forever and fondly carry in my memory. 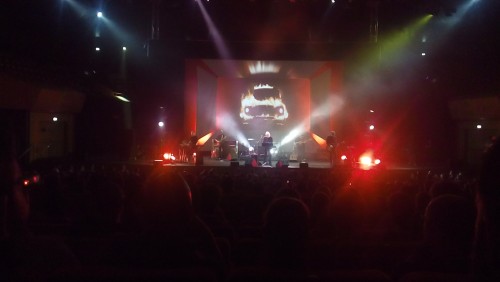 Posted on 30/08/2016, in Miscellaneous and tagged Big Trouble in Little China, John Carpenter, The Thing. Bookmark the permalink. 1 Comment.

← Monster Gallery: An American Werewolf in London (1981)
Monsters in Chinatown →